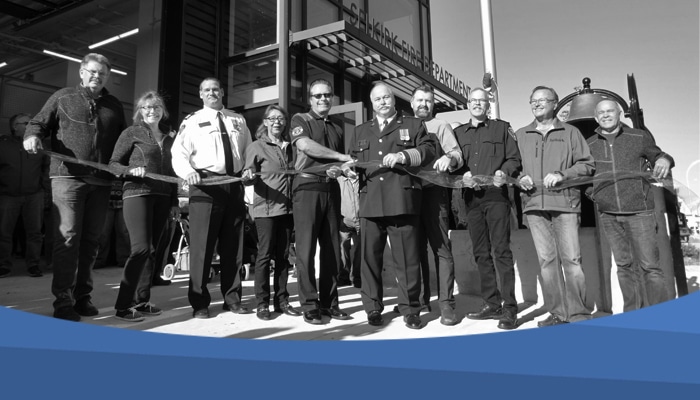 It’s the time of year when people look back and reflect on the year that’s passed. If we cast that backwards glance at the City of Selkirk for 2019, we might look at the city as a teenager who went through one heck of a growth spurt.

In fact, growth might be the word best suited to define this past year.

There’s been growth in the traditional sense, with Selkirk’s largest subdivision in years taking shape on Vaughan Avenue West. But there’s also been growth in the way the city is run. It started in 2014 when the Strategic Plan was adopted and has continued as everyone from council to administration and staff search for efficiencies and ways to make Selkirk, the city, continue to grow and develop into a more mature version of itself.

Mayor Larry Johannson likes to say it’s a great time to be in the City of Selkirk, and as he looks back at 2019, he’s not changing his tune.

“I say it a lot, but it’s because it’s true. It’s a great time to be in the City of Selkirk. We are growing, we are moving forward and we’re doing it better all the time,” Johannson said.

“I’m always the biggest cheerleader for the city and there’s a reason for that – there’s just so much to be proud of here. We’ve got development like we’ve never seen before, whether it’s the housing on Vaughan or the Industrial Park that’s about to enter the Second Phase, and we’re working hard to bring good things to our citizens.”

“We opened our first off-leash dog park this summer, let the dogs go for a swim in Selkirk Pool at the end of the season and the Waterfront events are out of this world. There’s nothing better than seeing everyone outside and enjoying what the city has to offer. It’s fantastic.”

Vaughan Avenue West is a 100-plus home development with two multi-family lots and it’s the largest subdivision the city has seen in decades. Both council and city administrators have been drawing up the blueprint for sustainable growth in Selkirk for years and Vaughan Avenue West will be the template for that moving forward.

A new $2.4 million forcemain and lift station off Manitoba Avenue – cost shared by the city, provincial and federal governments – will expand the city’s treatment and collection system to make way for up to 1,800 new houses as well as commercial and industrial development.

The project is critical to the city being able to handle more business in the Industrial Park, commercial development along Manitoba Avenue and residential growth on land west of Annie Street.

Taking control of our own economic destiny

It was a case of history repeating itself when the city made the bold move in 2019 to purchase 326.5 acres of land for $3.2 million in the city’s west end. The land – located south of Walmart to Selkirk Avenue and from Hwy. 9 to the railway tracks – is enough to double the population of Selkirk.

In 1912, a group of community leaders purchased 450 acres of land and offered 30 acres of it to the Manitoba Rolling Mills – now Gerdau – and pegged the rest for residential development to supply homes for the newly employed workers. The foresight of that purchase and negotiations with the Rolling Mill made Selkirk what it is today.

CAO Duane Nicol says the city’s 2019 land purchase, like the 1912 deal, will play an important role in shaping the city’s future and allow the city to take control of its own future development.

“It aligns with our Strategic Plan that calls for us to take firmer control of our economic destiny as well as to encourage responsible land use that aligns with the community’s vision. By owning this land, we’ll have full control over how it gets developed and we ensure it supports the community’s sustainability in the long run.”

Being recognized provincially and nationally

The city has invested in its downtown in a big way, with major improvements to Manitoba Avenue East that will see the historic block evolve into a modern, progressive, urban-hub for commerce, culture and recreation.

A new building is going up on the corner of Main and Superior that will further enhance the downtown area and be a mix of residential and commercial.

A mini mall and gas bar is going up on the corner of Manitoba Avenue and Easton Drive and the Industrial Park is prepping for Stage 2 development.

The city’s growth was so impressive, Selkirk got a nod from the country’s national news magazine in MacLean’s Top 100 Fastest Growing Communities.

Making the decisions that make sense

The new maturing City of Selkirk was prepared for this growth spurt and in 2019 continued with strategic infrastructure investments that will allow Selkirk to flourish with the right pipes in the right ground. The city has invested an incredible amount to ensure taxpayers get the most out of their infrastructure.

“That’s unprecedented in our history.”

This includes the new state-of-the-art wastewater treatment plant that will be completed next year, the aforementioned forcemain and the work on Manitoba Avenue. It doesn’t include all the street work and water main renewal the city has undertaken in 2019.

The city’s Capital Asset Management Program (CAMP) has given the city data to know where its infrastructure dollars will be best spent. In 2019, in partnership with the province, the city did $2.75 million worth of street upgrades to Main Street from Heap Avenue to Strathnaver Avenue.

Manchester Avenue got a full street, sewer and water line renewal as well as storm water/sewer separation which will protect those residents from sewer backup in the case of heavy rain events.

Hardware to back it up

2019 might be known as the year the city was recognized nationally for the excellent capital asset management work it had been implementing in recent years. When Selkirk began rewriting the way it managed everything from human resources to buildings and vehicles, the goal was to become a leader in asset management.

In 2019, Selkirk received the Canadian Network of Asset Manager’s (CNAM) Tereo Asset Management Award, presented on May 8 in Kelowna, B.C. It’s a big deal, and even bigger when you consider the two previous recipients – the City of Calgary and the City of Waterloo, both urban centres with populations substantially larger than the City of Selkirk.

The city’s win is credited to its commitment to using the principles of asset management to integrate its Climate Change Adaptation Strategy into day-to-day city operations.

Selkirk also passed a new Vehicle for Hire bylaw that paves the way for ride share companies to do business in the city, giving citizens another option for getting around.

Businesses want to work with Selkirk

The city has been working with the Prairie Climate Centre and in 2019, as in years previous, has been asked to present on climate change adaptation numerous times, to bodies like the Manitoba Chapter of the Canada Green Building Council, the Prairie Regional Adaptation Collaborative, the Federation of Canadian Municipalities regional workshop in Saskatchewan and the Asset Management BC conference in Vancouver. Selkirk’s climate change adaptation work was also featured on the CBC’s The National this summer.

“We’re being recognized nationally for our climate change adaptation strategy and our leadership in this area. We have other municipalities contacting us and looking to learn from what we’ve done,” Nicol said.

“Climate change is the biggest issue of our time and it’s critical that municipalities take action. That’s exactly what the City of Selkirk is doing.”

Going green for a brighter future

Other green initiatives the city has undertaken include solar panels at the Selkirk Rec Complex, geothermal heating at the water treatment plant, hybrid mobility buses and when it’s completed, the new wastewater treatment plant will not use any fossil fuels for heating. The new fire hall is also run almost completely without fossil fuels for heating.

“Opening our new fire hall was definitely a highlight for us this year. It was a long-time coming. We have the best volunteer fire department in the province. This strategic investment ensures the team has access to the right tools and the training space to keep their skills sharp,” said Johannson.

Making things easier for our citizens

The city took great steps to modernize its operations, which includes the ongoing development of its asset management program. There are significant software upgrades that give citizens a better online experience with everything from booking campsites to purchasing Get Outside Gear or Chuck Wear from the online store.

The city also continued with internal staff training on productivity software that will improve efficiencies and result in better service to citizens.

Two Citizen Support representatives are improving the response time for residents who contact the city with questions and requests for service.

The bright lights still like Selkirk, with filming of the Netflix production Fractured and the movie A Dog’s Journey using the city as a backdrop.  Local musician Goodie Grace came back to his hometown to shoot a music video for his latest single “Scumbag” features Grammy nominated and multi-platinum selling band blink-182 and many of Selkirk’s landmarks, including the water tower and the Selkirk Arena.

“2019 has been a great year for the City of Selkirk, and we expect to 2020 will be just as successful” said a very proud Mayor Johannson.