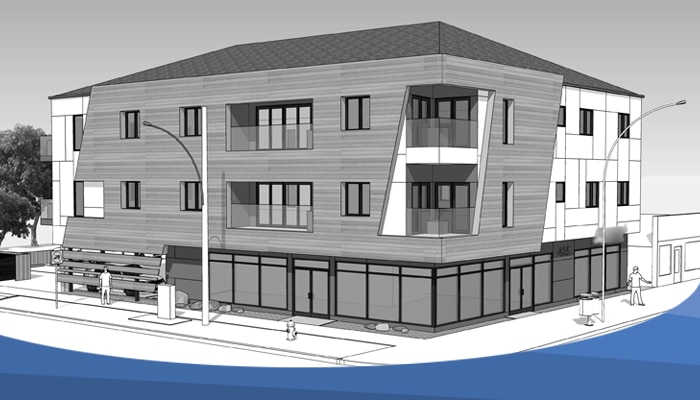 When city council adopted its Downtown Selkirk Renewal Strategy in 2016, it contained five strategic directions that ultimately would focus downtown development, ensuring it evolved into a place that people are drawn to, a place where they can shop, meet friends, hang out and live.

One of the five strategic directions is to promote mixed land use development and a new three-storey building going up on the corner of Main Street and Superior Avenue fits that descriptive to a tee.

The building will feature a commercial component on the first floor and residential units on the second and third floors. According to Lisa McLean, the city’s Economic Development Officer, it’s the type of development that fits well with the Renewal Strategy.

“It’s exactly what we’ve been trying to promote in the downtown area, mixed use, people living on the top floors and a commercial business on the main floor,” McLean said.

“We’re very excited about that.”

Plant the seeds and the fruit will grow

Mayor Larry Johannson said Selkirk’s downtown has always had a ton of potential and now, by adhering to the guiding principles of both the city’s Strategic Plan and the Downtown Renewal Strategy, the downtown is coming into its own.

“It’s a great time to be in the City of Selkirk. I walk around the streets and I see all the activity going on, especially in the downtown core. The redevelopment of Manitoba Avenue is taking shape and is going to be terrific when it’s done,” Johannson said.

“And this new building going up that will add another commercial entity to the downtown and provide places for people to live is fantastic. We’ve worked hard on making the city as a whole, but the downtown in particular, a place that’s very walkable. We want people living there, we want them to be able to walk out their door and down the street and grab a coffee, or a bite to eat, and all those visions are coming into focus. It’s a very exciting time.”

Pardeep Bhullar, President and CEO of Sante Fe Developments, is putting up the new building. He said Selkirk was a great fit and he likes the city’s attitude towards downtown development.

“We didn’t have any negative experiences, there was no red tape, it was a lot smoother and a lot more accessible than what we’re used to in larger markets,” Bhullar said.

The main floor commercial space is about 2,800 square feet and Bhullar said they haven’t even begun looking for potential tenants.

“Once we get a little closer, maybe in the springtime, we’ll put up a billboard and we’ll entertain what clients we might get. We’re anticipating it to be maybe an office space, whether it’s a legal space, or a doctors office or a pharmacy type of thing,” he said.

There are eight residential units, a mixture of one and two-bedroom apartments for rent. They vary in size from 800- square-feet to 1,200-square-feet and each has its own balcony.

Foundation work has already started and sewer and water hook-ups have been done.  Bhullar said he expects construction to be wrapped up by the end of May.

He anticipates he’ll do more projects in Selkirk. Though there isn’t an overabundance of land available for development, what there is comes at a good price and a low vacancy rate and changing demographics make it a good place to do business. Plus, he said, Selkirk has the necessary infrastructure and is located close to all the things people want to live near, including shopping, jobs, recreation and the City of Winnipeg.

The Downtown Renewal Strategy hits on several of the priorities in the city’s Strategic Plan, including downtown revitalization, taking firmer control of our economic destiny, building on Selkirk’s status as a regional service centre and revitalizing Selkirk’s image, says Selkirk’s CAO Duane Nicol.

“This development is yet more evidence that we are fulfilling our community strategic plan. Because of our progressive vision and methodical, strategic implementation and investment, we are attracting private sector investment and achieving community development the likes of which we’ve not seen in a generation,” Nicol said.

Tim Feduniw, Director of Sustainable Economic Development, said the Downtown Renewal Strategy articulated the need for populating the downtown and looking at pedestrian spaces, and that’s the kind of thing that’s happening right now with Manitoba Avenue and the new building on Superior Avenue.

The redevelopment of Manitoba Avenue will see the thoroughfare accommodate two-way traffic and switch from angle to parallel parking, which falls nicely under the redesign and beautify downtown streets directive.

“There’s an area in the core of Selkirk that can be celebrated and invigorated through mixed commercial/residential uses. This new residential and commercial building is a perfect fit for our Downtown Renewal Strategy and proof that it’s working,” Feduniw said.

“We’re starting to see private sector investment into our downtown and we’re working with other potential investors. There will be a combination of private and public sector investments that are mutually supportive.”

The Renewal Strategy – which looks at Manitoba Avenue East, along with the Waterfront and Water Tower, and the area from Rosser to Taylor avenues – was built with input from Selkirk citizens and stakeholders and aims to focus the direction of downtown renewal.