The City of Selkirk is located in the Interlake region just 20kms north-east of Winnipeg, the capital of Manitoba, with an access to all major highways, rail spur lines and the airport connecting it with national and international markets. Being the regional economic centre, Selkirk serves a trading area of 70,000 people and attracts visitors, skilled employees and new residents from over 750,000 people in the City of Winnipeg.

The City of Selkirk is undergoing a surge of revitalization and growth. Improvements to our waterfront and parks have enhanced the City’s natural beauty. Our new library, skateboard park and retail services are making Selkirk more attractive to residents and visitors alike. The new 180,753 ft² Selkirk General Hospital is a $100m investment and provides state-of-the-art health care technology. 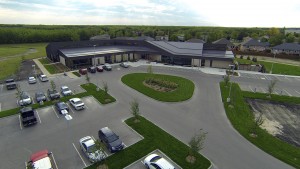 Selkirk hosts the multi-national Gerdau MRM Steel Mill, which employs over 450 workers. Selkirk also hosts a variety of businesses ranging from small to large fabricating and manufacturing firms which provide products and services to the surrounding area and for export. Selkirk has also seen substantial regional commercial growth, attracting retail brands such as Walmart, Staples, Canadian Tire and others. Most recently, a newly constructed 84-room Canalta Hotel is open for business.

Since 2011, over 200 single and multi-family residential units were added to the housing inventory of the City. This housing development serves the wide variety of demographics ranging from young professionals to seniors. Over 30 housing units are under construction, including the development of Vaughn Avenue West.

In addition, Selkirk has a thriving tourism industry, based on its proximity to the Red River and the prime location for cat-fishing. Self-guided walking tours are available for visitors and residents during the summer months to enjoy historic buildings dating back to the turn of the century in downtown Selkirk.The City also boasts the Selkirk Marine Museum, which tells the story of how the region’s development is linked to the commercial use of the Red River and Lake Winnipeg.

Selkirk offers a full range of recreational activities for all seasons. The Selkirk Recreation Complex, home of the Selkirk Steelers MJHL hockey team, is widely recognized as one of the premier arenas in Manitoba.