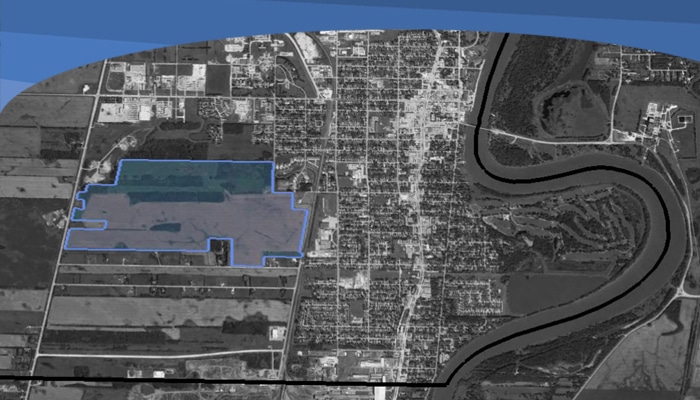 Selkirk’s purchase of 326.5 acres of land for $3.2 million in the city’s west end is a testament to council’s commitment to the sustainable development of the city and a nod to community leaders from 100-plus years ago who used land acquisition to ensure Selkirk’s future.

It was 1912 and a group of movers and shakers formed the Selkirk Development Company, bought 450 acres on the southern outskirts of town and offered 30 of those acres to a company that had outgrown its St. Boniface location. The remainder of the land was identified for residential development to supply homes for the newly employed workers.

That company was the Manitoba Rolling Mills – today known as Gerdau – and in the fall of 1913, MRM broke ground and the rest is history.

Mayor Larry Johannson gets a grin on his face when he talks about that legendary deal, and the impact it had on the city then and today.

“It’s an incredible story, the foresight that these community leaders had all those years ago is really unbelievable,” Johannson said.

“I can imagine the town folk thinking these guys are crazy, giving land away, but we see the value in their decision on a daily basis and we have for more than 100 years. Council of the day supported their plan, and it’s safe to say if they hadn’t bought that land and made that deal we’d be living in a very different Selkirk, in fact, there’s a good chance many of us wouldn’t be living here at all. That deal made Steeltown, that deal made Selkirk.”

Think of things in the long-term

Selkirk Chief Administrative Officer Duane Nicol said council’s purchase of the 326.5 acres is the largest land purchase ever by the city and, he’s confident that like the 1912 deal, it will play an important role in shaping the city’s future.

“It aligns with our Strategic Plan that calls for us to take firmer control of our economic destiny as well as to encourage responsible land use that aligns with the community’s vision. By owning this land, we’ll have full control over how it gets developed and we ensure it supports the community’s sustainability in the long run.”

The 326.5 acres is located south of Walmart to Strathnaver Avenue and from Hwy. 9 to the railway tracks. It’s enough land to double the population of Selkirk, Nicol said, and it likely makes the city the largest landholder in Selkirk. It was purchased for just under $10,000 an acre, below market rate, and is currently being rented for agricultural, residential and commercial purposes.

“It makes more money than it costs on an annual basis.”

Good for the city and the taxpayers

In the future, the land will facilitate the next 30 to 50 years of growth in the city, as it is a continuous parcel of developable land connected to the city’s infrastructure. It will also be a source of non-tax revenue income for the city.

The purchase will not affect taxpayers as it was paid for with an innovative land acquisition reserve set up a number of years ago by the city. The fund was grown through land sales and surpluses that were dedicated to it when they occurred.

“There will not be one cent of tax increase, it will have zero impact on tax payers at this time. And as the land is sold, the money will go back into the reserve to purchase other strategic parcels in the future,” Nicol said.

“It is a revolving dedicated reserve fund so that the city can buy parcels of land that have strategic value for the long term development and growth of the community, without having any negative impact on taxpayers.”

Selkirk being noticed by outside investors

“What Selkirk has done is visionary and transformative. As an owner of the lands that will hold their future neighbourhoods, they can forward-plan with confidence,” Scatliff said.

“This acquisition gives Selkirk the ability to advance its sustainable vision – in partnership with like-minded developers – to realize its aspirations for the next generation.  The future growth of Selkirk can evolve at a pace and scale that suits its character, culture and commitment to sustainability.  This move serves to solidify Selkirk’s position as a leader in planning for the future.”

Making it easier for sustainable development

Nicol said it’s a leading practice for municipalities to secure land for development and achieve near- and long-term goals. The land is now available for development when it is needed, negating the possibility of other landholders creating a boom or bust marketplace.

“It will be available for development in the long run, it will be strategically rolled out over time, so not flooding the market but also not stifling the marketplace,” Nicol said.

“This purchase by the city makes it stable, predictable and accessible to private sector developers in the future.”

Successful practices across the country

The city of Medicine Hat has for years successfully used land acquisition to help meet its own strategic development goals. The southern Alberta city not only banks land, but acts as its own developer, and uses the money generated through sales to improve the community, supporting development of facilities like the Medicine Hat Family Leisure Centre and a performing arts centre.

“This city has learned over many years to prudently match the risks and costs associated with land development and land banking with opportunities to directly serve the interests of the community and generate a commercial return.”

The City of Selkirk is currently working with Scatliff + Miller + Murray to prepare the concept plan for the land.