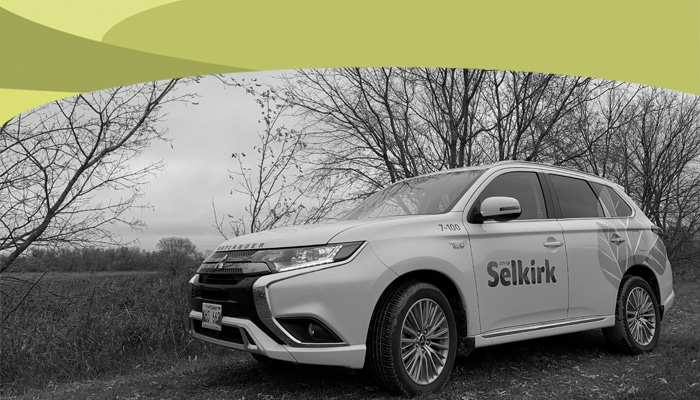 Even if City of Selkirk Public Works Manager Ryan Sicinski revs his PHEV a little bit while waiting at a red light, he’d be doing so in an environmentally conscientious way that won’t enlarge the city’s carbon footprint.

In fact, by travelling the city streets in his Plug-in Hybrid Electric Vehicle, or PHEV, he’s reducing the city’s carbon footprint and saving money by rarely, if ever, having to pull into a gas station. A PHEV can run on electricity only, as a hybrid, or on gas only.

And though Sicinski’s only been driving the vehicle for a month or so, he says the city is a happy customer.

“I’ve been really impressed with the PHEV,” Sicinski said.

“At this rate, I will likely own one myself in a couple years.”

Nothing Outlandish on the fuel savings

The 2019 Mitsubishi Outlander plug-in hybrid electric sport utility vehicle was purchased for $47,000. While the price is $6,700 higher than the gas version of the same vehicle, the fuel savings the city will reap will more than make up the difference.

If the city does have to switch to gas occasionally, the PHEV burns 3.2 litres for every 100 km, compared to 6.8 litres its gas counterpart burns.

Out with the old, in with the Electric

Scott Blanco, Manager of Buildings and Fleet Maintenance, said the purchase of the PHEV aligns with both the city’s Capital Asset Management Program (CAMP) and its Greenhouse Gas (GHG) reduction plan that pledges to reduce city emissions by 20 per cent in 10 years.

A half-ton truck was due for replacement, making it an ideal time to pilot the electric SUV.

“The need for a new vehicle made it the right time to take a look at something electric and see how it would work for the city and see what kind of emissions we’re going to be able to save,” Blanco said.

“When the PHEV is being driven around the city it’s all electric so it’s not costing us any fuel and we’re reducing our carbon footprint quite a bit.”

The city looked at the Public Works Manager’s daily driving in 2018 and he drove an average of 50 km per day. So assuming the PHEV is only driven that same amount, it won’t use gas and it will help the city reduce its GHG emissions by 4.9 metric tons.

In 2017, the city’s vehicle fleet was responsible for 47 per cent of its greenhouse gas emissions.

The right SUV for the job

Replacing the half-ton with the PHEV is part of the city’s asset management strategy of making sure it has the right equipment for the right task. Chief Administrative Officer Duane Nicol said where the city can become more energy efficient within its fleet, it will.

“Not every city vehicle needs to be a half-ton truck. Part of what we’re doing is looking at our fleet and making sure it’s right size for the job,” Nicol said.

“With the PHEV, we’ve found a vehicle with alternate fuel that can do the job required. There isn’t a feasible half-ton truck on the market now that is a hybrid or electric, and this SUV is able to do the job.”

All part of the bigger picture

The city is a part of an FCM initiative, the Climate and Asset Management Network (CAMN), which offers peer-learning opportunities, training, and funding to help Canadian municipalities integrate climate change and sustainability goals systematically into decision-making about infrastructure assets.

Nicol, who was on the provincial government’s Low Carbon Working Group, says there’s a move towards alternate fuels. The Pallister Government is looking to electrify Manitoba’s transportation infrastructure as indicated by the Premier’s recent mandate letter to cabinet.

“It’s not just the City of Selkirk moving in this direction, this is where the world is going and rather than wait until the last minute to do this and do it at a high price, we’re evolving our fleet to an electrified one,” Nicol said.

“We’re getting ourselves prepared. Asset management makes it more cost effective and makes the city more resilient every day through our regular course of business. The default setting is we’re becoming more adapted and less fossil fuel dependent.”

The Grey Cup is stopping in Selkirk on Jan. 19 as part of the Grey Cup Manitoba Tour Presented by Princess Auto
January 9, 2020
Stay in the Know!
Upcoming Events