Halloween Haunt returns to the Marine Museum this weekend 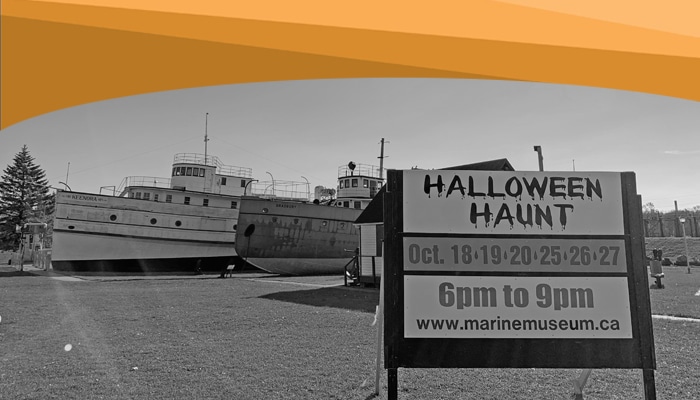 Fans of scary stuff will be making their way up river this weekend for the 20th annual Marine Museum Halloween Haunt, and those who dare to board, need to be forewarned – you enter at your trouser’s peril.

“We always tell everyone to prepare to ship their pants,” laughed Shay Nordal, the Museum Manager.

It’s a heck of a tag line, but Nordal says it’s based in fact and confirms they’ve had a “few incidents” over the years.

It’s no wonder. A stroll through the Keenora or the Joe Simpson under the cloak of darkness would give anyone a few chills, but when you throw in some of the things that keep you up at night, it gets real scary, real fast.

Nordal says they like to play off everyone’s fears, so there’s part of the ship that’s dedicated to reptiles, another part featuring tight spaces and then of course, the creepy clowns like Pennywise, everyone’s favourite from the movie ‘It’.

If you like your Halloween fun but don’t enjoying the scary stuff, the Marine Museum has you covered. While one ship is loaded with the things that go bump in the night, the other is much, much more mild.

“There’s one very scary ship, one non scary that’s decorated for the wee kids, and there’s one that’s going to have activities and concessions,” Nordal said.

Nordal said they generally have around 3,500 people over the six days, and if the line-ups are long, they don’t turn anyone away just because it’s closing time. Admission is $12 per person and kids six and under are free. All money raised goes to support the Marine Museum.