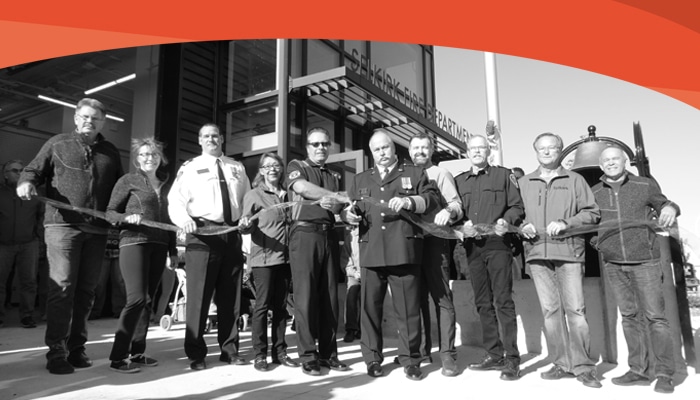 The impressive addition you see on the west side of the Selkirk Fire Hall was officially opened and celebrated on Sept. 28 and while the three-storey, 8,000 square foot add on has been in operation for several weeks now, there’s still a few final touches to make it truly home.

“We’re pretty much settled in, we’ve got a little bit of home decorating to do, some more pictures to put up, but functionality-wise, we were ready to go a couple weeks ago,” said Selkirk Fire Chief Craig Fiebelkorn.

“The open house was awesome. I wasn’t expecting that turnout or that response from the crowd, that’s for sure.

“I think it shows respect for the fire department and respect for the new building for us to be in. It seems that the public was as excited as we were to get into this new place.”

A building worthy for our first responders

The new place includes a truck bay for the department’s new ladder truck, which arrived this summer, and improves the function of the existing building by adding showers, lockers and changing rooms.

It also includes a year-round, indoor training suite, a training room, administrative offices and is the new home to the city’s Emergency Operations Centre (EOC).

Mayor Larry Johannson said the Fire Department is a source of pride for him personally and it was great to see the community come out and show their support as well.

“It was super exciting to be able to unveil this new addition to the people of Selkirk, because it is a terrific building that gives our firefighters everything they need to be the best they can be,” Johannson said.

“They give their all for this city and it’s nice to be able to house them in a place that recognizes the dedication and commitment they have to us all. This building is state of the art, and is befitting of the top-notch crew we have here. Congratulations to all of them.”

Popular to the people

Approximately 1,500 people came out to see the new addition and with the purchase of a burger, bag of chips and a drink or $5, they supported the Firefighters Burn Fund to the tune of just over $1,100.

Fiebelkorn thanked Thors Meats and Aaron’s No Frills for donating the food.

He said the open house itself went over better than anticipated and the people kept streaming in right until the very end. It was a feel-good day from start to finish.

“It was packed upstairs all the time and then when you looked outside every piece of apparatus had half a dozen people around it. The face painting was huge, the clowns that come out and do the face painting for the kids, that’s a huge hit, everything they do, the giveaways, balloon dogs, we almost had to shoo them out at the end of the day,” Fiebelkorn laughed.

Trickle effect to the firefighters

The high that the public experienced during the open house has carried through to the way members of the department are feeling everyday, Fiebelkorn said.

“I noticed a huge improvement with my guys, it was kind of depressing being stuck closed up in a little apparatus bay. Having this new building for them has been a real good booster in morale for our department, that’s for sure,” he said.

“We were very limited to what we could do, meeting wise, training wise, so having this facility now, we’re ready and raring to go…There’s a lot of pride there, an ownership, it’s our building right now and the guys really enjoyed showing what’s theirs. It’s something to be proud of for the guys, for the department, but for the City of Selkirk as well. It takes us to a whole new level of capabilities.”