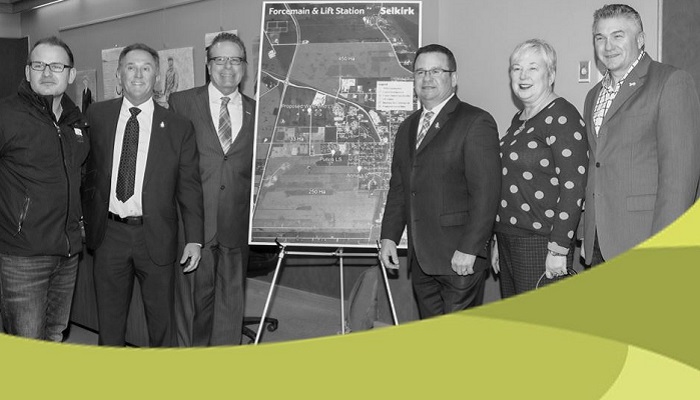 Work on a new forcemain and lift station for Selkirk will begin this spring, putting in place one of the final pieces of wastewater infrastructure that will ensure the city is prepared for current and future development.

Representatives of the federal and provincial governments were on hand Wednesday afternoon to announce $2.4 million in funding for a forcemain and lift station project through the Small Communities Fund.

The $2.4 million, project will be cost shared by the federal and provincial governments and the City of Selkirk.

The funding will support the design and construction of a forcemain and lift station off Manitoba Avenue on city-owned land. Once complete, it will expand the treatment and collection system to make way for up to 1,800 new houses as well as commercial and industrial development.

Mayor Larry Johannson said the project is critical to the city being able to handle more business in the Industrial Park, commercial development along Manitoba Avenue and residential growth on land west of Annie Street.

”Since 2011, the City of Selkirk, with the support of our funding partners, has made significant investments into our water and wasterwater systems; improving our capacity to serve our growing community, our resiliency to climate change, and our environmental performance,” Johannson said.

“This project will support the future development of almost 750 acres and will reduce the current demands on our existing system.”

The city has been improving its water and wastewater systems in recent years, beginning with the expansion to its water plant in 2011. Two years ago it tapped into a new water source to supplement its current well and work is underway on a new $39 million state-of-the-art wastewater treatment plant that will exceed provincial standards and be able to handle future growth.

The Honourable Bernadette Jordan, Minister of Rural Economic Development, Jeff Wharton, Manitoba Minister of Municipal Relations and Selkirk MLA Dr. Alan Lagimodiere, were on hand for the announcement at the Selkirk Civic Offices.

“Modern efficient water and wastewater infrastructure is essential to safeguarding the well being of Canadian families and building the Canada we want for tomorrow,” Jordan said.

“This important project in Selkirk will not only improve services for residents, but protect the environment, keep communities healthy and liveable, and pave the way for economic development and growth.”

“This project will ensure that wastewater in the City of Selkirk will be treated to a higher quality. Improvements to our municipal infrastructure are a priority in Manitoba, and these projects are an important step towards making our municipalities’ infrastructure stronger and more efficient for all residents,” Wharton said.

“By having a plan in place, we have been able to leverage grants that are available today, to invest in critical infrastructure we will need very soon. By having a plan, we won’t miss the funding boat,” Nicol said.

“This strategic investment means we are able to immediately say yes to industrial, commercial and residential development opportunities that present themselves, rather than making them wait and risk losing the opportunity because our infrastructure isn’t ready. It means we can broaden our tax base and be more financially sustainable.”

“This takes pressure off of the Dufferin station, everything flows through Dufferin. The new station is going to take any future growth in that area west of Annie and south of Selkirk Crossing. It will also take everything on Manitoba, again, taking pressure off Dufferin,” McDermid said.

Another benefit of the project is it will allow the city to remove some pumps from an existing lift station and turn it into a gravity system.

The forcemain and lift station align with the city’s Strategic Plan Priority 3, which calls for safe and sustainable infrastructure achieved through adequate funding for maintenance of all city-owned assets and clear intentions for future development.

Work on the forcemain and lift station is expected to begin in spring 2019 and conclude in 2020.