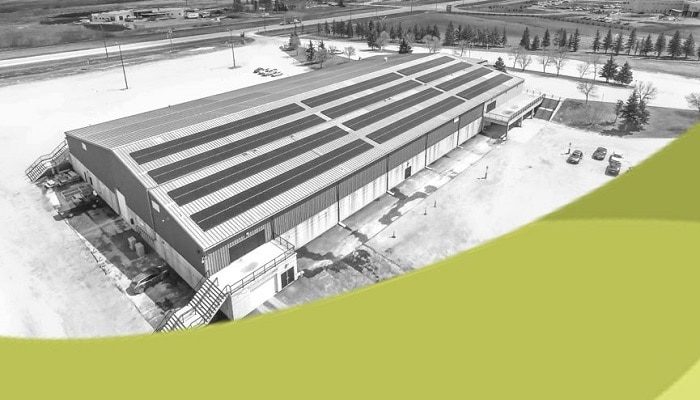 MAY 13, 2019 – The City of Selkirk flicked the switch to activate the sun’s energy at the Rec Complex this morning, making the sporting facility one of, if not the, largest user of rooftop solar power in the province.

Selkirk Mayor Larry Johannson said being good environmental citizens is important and the city is glad to do what it can to become greener. Geothermal heating was installed when the Rec Complex was built in 1985 and the solar panels will help take the city even further off the grid.

“It’s a proud day here in the City of Selkirk. The sun is shining and we’re taking advantage of natural resources to heat our buildings, to power places like the Rec Complex, which is such a huge building, and we’re happy to be soaking up the sun’s energy not just today, but years into the future,” Johannson said.

“By installing solar panels we’ll be more kind to the environment, which I’m a huge fan of, and we’ll be saving taxpayers’ dollars at the same time. It’s a bright idea and I give credit to our staff and all our partners on this project for making it a reality.”

The Selkirk Rec Complex is now soaking up the sun and driving down the city’s energy bill and its carbon footprint in one fell swoop.

“The Rec Complex is a very large user of power because of the building that it is,” McDermid said.

“We make ice for about eight months out of the year, it’s a big building, it has a banquet hall, it’s got a lot of stuff going on in it, so it makes sense to try to supplement the power.”

Scott Blanco, the city’s Manager of Buildings and Fleet, said it’s great that the city is able to benefit from Mother Nature’s heat source, but Mother Nature also made the 200-kilowatt install – done over the course of the winter months – a little tricky.

“The cold and the snow presented some challenges, but other than that everything went smoothly with the installation,” Blanco said.

The panels are mounted on the south-facing roof for maximum exposure to the sun’s rays. A bidirectional metre keeps track of the city’s usage of solar power and hydro power.

“Anytime the solar panels are creating more energy than the building is consuming we will be selling hydro back to Manitoba Hydro,” Blanco said.

“Whatever we’re not using gets put back onto the grid.”

Chief Administrative Officer Duane Nicol said the city is making smart environmental decisions a priority, and the chance to use a natural energy source to offset the use of hydro electric power fits with the city’s vision. Selkirk is part of an FCM initiative, the Climate and Asset Management Network (CAMN), which offers peer-learning opportunities, training, and funding to help Canadian municipalities integrate climate change and sustainability goals systematically into decision-making about infrastructure assets.

“Beyond the strong economic case for this installation, there are the environmental and the risk reduction benefits as well. In the future, climate change will demand that electricity utilities become more resilient to interruption. Micro-production and smart grids are the future that climate change will demand of us, and I’m proud to say that we will be ready to be part of that solution when the time comes. Additionally by producing our own electricity we make it much more affordable to transition away from the use of fossil fuel heating,” Nicol said.

The life expectancy of the solar panels is about 30 years and the city expects that they will pay for themselves in 17 years, which means there’s 13 years of revenue generating gained from the addition of solar power. The pay-back period may be shorter if Manitoba Hydro’s rates continue to climb.

Sycamore Energy Inc., handled the install and CEO and co-founder Justin Phillips said he believes the Rec Complex is the largest rooftop installation in the Province of Manitoba and largest by a municipality. He commended the city for being “forward thinking”.

“Just the fact the City of Selkirk is taking the initiative to install this kind of technology, it’s not a small investment…so taking that initiative is encouraging,” Phillips said.

The savings from solar power are substantial, Phillips said, citing the Levelized Cost of Electricity (LCE) per kilowatt with solar at about 4.5 to 5.5 cents compared with about 8 cents for Hydro.