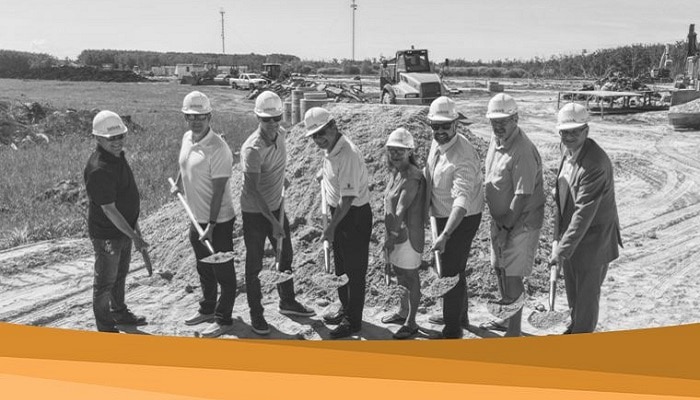 Selkirk, June 20, 2019 – Stellar Capital Inc., broke ground recently on an 84-unit townhouse complex that will be part of Vaughan Avenue West, the largest residential development in Selkirk in decades, and co-owner Keith Thiessen likes the location of his company’s latest project.

With much sought after rental townhouses already in the rural communities of Niverville, Ile des Chenes, Headingley and West St. Paul, Thiessen, who owns Stellar Capital with cousin Morley Friesen, said Selkirk is a good fit.

“We’re Blumenort boys, so we’re comfortable with a certain distance. Selkirk, though it has a lot more people, reminds us a little of Niverville in essence,” he said.

The Stellar Capital project is part of the larger development on Vaughan Avenue West that also features the 104-single family and two multi-family-developments, the first phase of which began construction in March of this year by GRG Investments.

Together, the two properties represent the largest residential development in Selkirk in many years.

Mayor Larry Johannson said he’s happy to say once again that this type of development is exactly what Selkirk council and city administration have been working towards.

“It makes me smile every time we have another ground breaking because this is what we’ve been aiming towards. Selkirk is a city with so much going on, whether it’s commercial development or residential like Stellar Capital’s project, and each and every one of them is exciting,” Johannson said.

“Kudos to the city team and the boys from Stellar Capital. They’re a top-notch team and they’re bringing really nice, impressive rental properties to our fine city. I’m thrilled.”

Rental properties have been built in Selkirk in recent years, including Broadstreet Properties’ Selkirk Meadows on Manitoba Avenue and Parkside Terrace on Sophia Street and Thiessen said Stellar Capital’s townhouses will be a perfect compliment.

“We see that maybe there’s a gap with townhouses, so we’re putting some townhouses into the city. Vacancy rates are low, there’s lots of employment in Selkirk, so we think it’s going to be very needed,” he said.

Tim Feduniw, Director of Sustainable Economic Development for the city, said Selkirk has been drawing up the blueprint for sustainable growth in Selkirk for years.

In 2017, the city’s Investment Profile was released, providing investors and entrepreneurs valuable information about Selkirk and why putting their money into the city makes sense. That was followed by the city’s Community Profile, which used much broader strokes to provide information on multiple facets of life in Selkirk. It’s information that’s still beneficial to investors and entrepreneurs, but also people who already call Selkirk home and those who may be considering a move here.

“The City of Selkirk makes strategic decisions, plotting a course for development that makes sense for the city and for the people living here, as well as those who want to live here,” Feduniw said.

“We’re seeing the fruits of those labours now, with Vaughan Avenue West being the largest development we’ve seen in years. Council and administration have worked hard to showcase Selkirk, and entrepreneurs like the good folks at Stellar Capital are seeing the potential and investing in Selkirk.”

Chief Administrative Officer Duane Nicol said Stellar Capital’s townhouses represent the kind of smart growth the city has been working hard to achieve – higher density development that blends in with the surrounding neighbourhood, offering different forms of housing options and expanding the range of housing available in Selkirk.

“The Stellar Capital development, paired with the rest of Vaughan Avenue West, is a great example of thoughtful development that supports the city’s long-term viability. It’s growth that make Selkirk more economically, socially and environmentally sustainable. It brings new employees and customers for local business, new families for local schools, and provides yet another housing choice for citizens. It’s development that helps us achieve our community strategic plan,” Nicol said.

Stellar Capital and Vaughan Avenue West fit with the city’s Strategic Plan and hits each of the plan’s five priorities – making Selkirk a vibrant, safe and healthy community, creating a strong and stable local economy, having safe and sustainable infrastructure, getting maximum value from community resources and being good environmental stewards.

Thiessen said the units are very nice and work well for “people with a couple of good incomes, working people or retired people”.

“They’re loaded. All the appliances, five appliances, air conditioning, walk in closets and decks. The two bedrooms have front and back decks, they’re very complete spaces for people,” he said.

Units available for lease in November

Two of the buildings are underway now and Thiessen said they’ll be leasing by November and finished building in the fall of 2020.