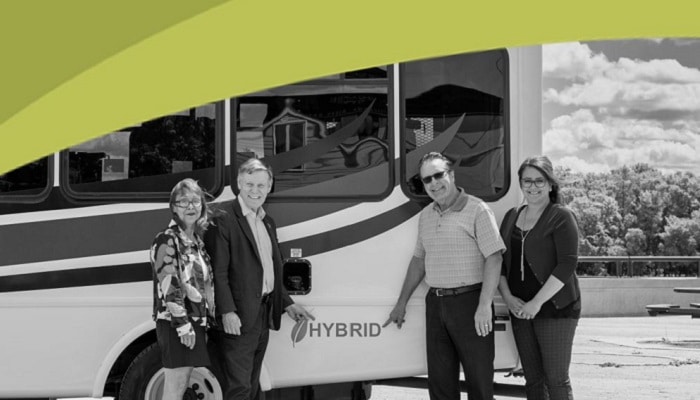 City of Selkirk, June 10 – The City of Selkirk and Federal Government announced today that three new Selkirk Mobility buses are transporting riders throughout the streets of Selkirk and one of them is doing so with hybrid technology, allowing the city to study the cost and environmental savings it provides.

A federal cost-shared Public Transit Infrastructure Fund contributed $150,000 towards the purchase with the City of Selkirk also contributing $217,037.

Winnipeg South MP Terry Duguid, Selkirk Mayor Larry Johannson and members of council, as well as Selkirk Transit Authority board members and staff were on hand for today’s announcement.

Proud to service the community with cost-saving hybrid technology

Two of the new buses are gas and the third, a pilot project for the city, is outfitted with hybrid technology. The city’s Strategic Plan calls for adequate funding for maintenance of all city owned assets and reducing the environmental impact of the city’s practices and services. The city’s GHG Reduction Plan, which calls for a reduction in corporate GHG emission by 20% by 2026, requires the city to look for options to reduce greenhouse gas emissions when purchasing new vehicles.

The city will use the third bus to study the operational impacts, cost savings and the GHG reductions of operating a hybrid bus.

Johannson said the new buses will help improve an already successful service, and the addition of a hybrid bus fits with the city’s environmental efforts.

“We’re committed to reducing our carbon footprint and by putting a hybrid bus into Selkirk Mobility’s fleet, we’re taking another step in that direction,” Johannson said.

“Keeping seniors and those with mobility issues active in the community is important and Selkirk Mobility gives them that opportunity to connect with others and I’m really proud of that.”

Dan McDermid, Director of Operations, said other regions already using the hybrid buses have indicated substantial savings can be had.

“With the hybrid, we’re anticipating 16 per cent fuel reduction, based on information the city received from another location,” McDermid said.

“If we see good fuel reduction in this one bus, we can install hybrid technology in the other two in the future.”

Reducing our carbon footprint where possible

Selkirk CAO Duane Nicol said the world is moving towards alternate fuels and by piloting the hybrid bus it allows the city to learn how it performs in Selkirk’s climate. It also provides city staff the opportunity to build skills to manage and operate a hybrid fleet.

“We have our Greenhouse Gas Reduction Strategy, and this is one aspect of it. We’re also looking at all of our fleet vehicles and right-sizing the fleet – does every use need a truck, or can we reduce the size of the vehicle with smaller carbon footprint vehicles that are electric or hybrid,” Nicol said.

“When we’re talking about climate change mitigation, and what we’re doing to reduce our GHG emissions, the key for us being a small city and not having a lot of resources is integrating that into all of our considerations. If we’re going to make a change, let’s make a change for the better. When we’re replacing fleet, when we’re replacing equipment, that’s where we can make those swap outs, it’s a lot more cost effective that way. It’s another asset management benefit, we’re intentionally looking at all those changes and we can plan and not replace like for like.”

The new buses will replace Selkirk Mobility’s fleet that included three buses – the oldest is a 2005; the newest a 2007. All three of the buses have been identified through the city’s Capital Asset Management criteria as being at the end of their lifecycle and due for replacement.

Nicol says Selkirk Mobility launched with a used bus fleet because getting the service up and running quickly was a priority given the failure of the former Selkirk & District Handi-Bus. Replacing the buses was planned for.

“The cost of asset replacement is built into the pricing model. Every year Selkirk Mobility puts funds away to replace its fleet. Because we planned for fleet replacement and had saved funds, we were able to take advantage of this grant opportunity and secured a brand new fleet for almost fifty cents on the dollar.”

The Honourable Bernadette Jordan, Minister of Rural Economic Development, announced funding for the purchase of the three new mobility buses for Selkirk Transit Authority, which manages Selkirk Mobility as well as Selkirk Transit.

“Making sure everyone can get where they need to go safely, quickly and comfortably is essential to creating inclusive communities. Supporting vital projects like the purchase of these mobility buses in Selkirk will ensure that all members of the community have transportation options that meet their unique needs,” Jordan said.

The new buses were purchased from Crestline Coach in Saskatchewan.

City of Selkirk 50 mins ago

City of Selkirk 54 mins ago