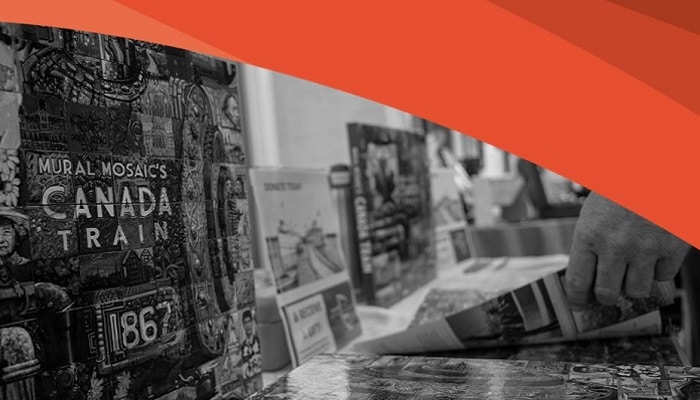 An 8×12 mural made up of 800 tiles painted by community members to commemorate Canada’s 150th birthday in 2017, the mural brought people together to create a glorious piece of art that all on its own will stand the test of time. Our mural became part of a train that connected 150 community mural mosaics created in communities right across Canada.

Now, you can take the story of our Mural Mosaic, and the 149 others, home with you in an impressive coffee table book called Canada 150 National Mural Mosaic. The book is stunning, and words hardly do it justice.

You have to see it to believe it

“When I first saw it, my reaction was ‘wow’. It’s actually stunning, and until you see it yourself it’s kind of hard to imagine how impressive it is,” says Mayor Larry Johannson.

“It’s big and will look fantastic on your coffee table or bookshelf, and when you look through it, you’re really taken in by the stories. Of course, the story of Selkirk’s Mosaic Mural is special, but reading about all the other communities across the country that came together for this wonderful celebration of Canada’s 150th birthday is heart warming. I’d recommend it for everyone.”

Your donation gets you a book, and a tax receipt

With a minimum $75 donation to the Selkirk Heritage Endowment Fund (SHEF) you’ll receive a copy of the book, valued at $75.

Vanessa Figus, Marketing and Communication Coordinator, said the book is the perfect keepsake for the celebration of Canada’s 150th birthday and the connection made through the creation of the Mural Mosaic. Donating to SHEF to receive the book quite simply puts the spirit of preserving history into perpetual motion.

“SHEF and the Mural Mosaic project were both cut from the same cloth, endeavouring to preserve history, one on a local scale, the other on a national scale, so it makes sense that we tie the knot a little tighter and give those who donate a copy of the book,” Figus says.

“When people see the book, they’ll be blown away. It does the Mural Mosaic project justice and I think everyone will be proud to know their donation continues Selkirk’s commitment to not just our heritage but Canada’s as well.”

SHEF was established in 2012 by the City of Selkirk as a perpetual endowment fund that will support the ongoing operational costs of a new municipal heritage museum. Until such a museum is established, the fund provides annual grants to the Marine Museum of Manitoba.

The trio’s plans originally brought together world-renowned artists – who didn’t know each other – to create mural mosaics and it didn’t take long for their visionary concepts to gain international acclaim.

Works like Wildlife Art, featuring artists like Robert Bateman, and The Horse Gift, which brought together the world’s best equine artists, were celebrated successes.

“In just two short years of creating murals the international community was starting to take notice. Mural Mosaic projects began lining up as communities and spectacular artists from around the globe began seeking out this unifying and emotionally engaging art form. The highly interactive website of www.MuralMosaic.com went from 100 to 100,000 online visitors daily! Suddenly Lewis Lavoie’s mural mosaic concept and his partners’ abilities to bring people together through art became a world-renowned phenomenon.

“…These projects were just the start of remarkable collaborations uniting artists who had never met before and may never meet again other than through creativity.”

They began their work on the 150 Mural Mosaic Canada Train in 2015, with the goal of bringing an entire nation together through art by creating a mural mosaic train through thousands and thousands of paintings by Canadians from coast to coast.

Your $75 donation to SHEF can be made at the Selkirk and District Community Foundation offices at 200 Eaton Avenue, and the book, which is gifted by the City can be picked up there as well. To make your donation online, click here.