Eveline reconstruction to make a more accessible and vibrant downtown 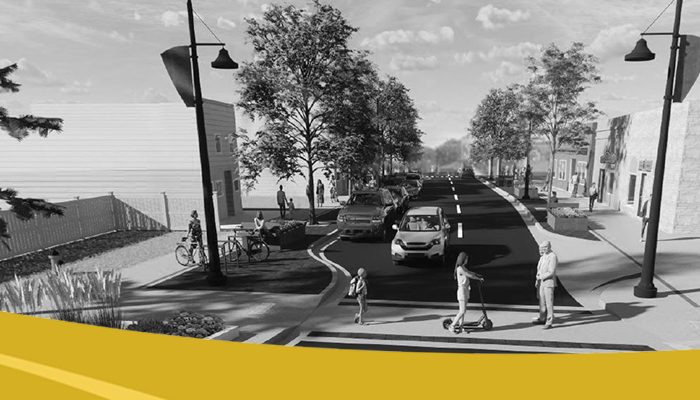 Reconstruction of one of Selkirk’s historic roadways will begin this spring when a well-travelled portion of Eveline Street is redone. The work will improve safety for motorists and pedestrians, make the street more accessible and connect it to active transportation pathways and sidewalks that allow for walkers and riders to go from Selkirk Park all the way to shopping on West Manitoba Avenue.

“This is a huge project. We’re rebuilding seven city blocks of road, sidewalk and boulevard all at once. It’s the largest single city street rebuild in Selkirk in decades – if not ever,” Nicol said.

“The roadway was identified as being in poor condition under our Capital Asset Management Program (CAMP) and in need of a complete rebuild and while we’re doing that we’re going to bring the street up to modern standards for accessibility while improving lighting, public safety and adding an active transportation pathway as well as other urban design best practices.”

“Exactly the sort of investment that strengthens a downtown”

“Selkirk’s Eveline Street reconstruction project is exactly the sort of investment that strengthens a downtown. It is a bold step in the right direction.”

“Vibrant downtowns are destinations where people, arts, culture and business all come together to serve as a key part of the city’s identity. They are well connected and accessible for everyone whether you’re walking, biking, taking the bus or driving your car. Strong downtowns are critical for successful cities, and they are places people just want to be.” 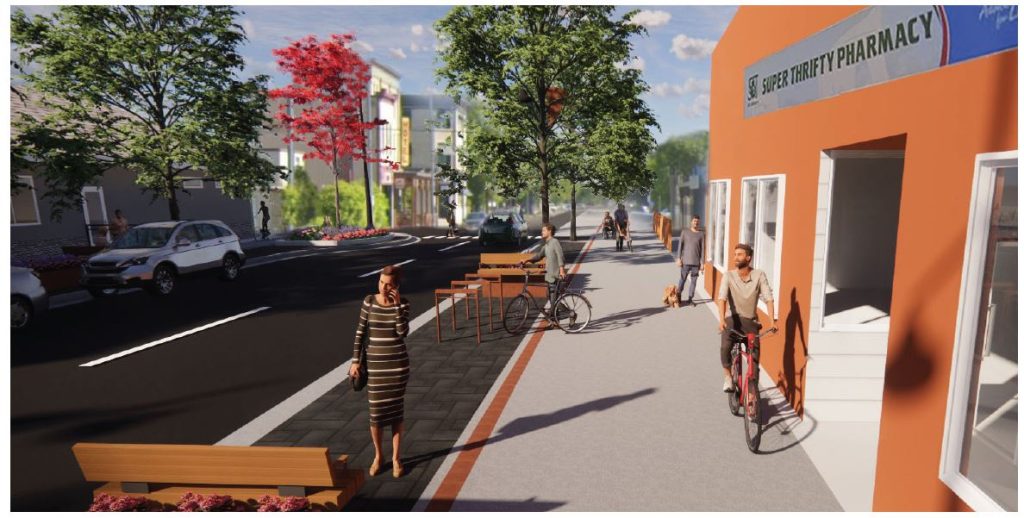 The project was originally slated to begin in 2021 with Manitoba Hydro moving overhead wires along Eveline and putting them underground. A strike last year at Manitoba Hydro delayed that work, which will now begin in March.

Selkirk Mayor Larry Johannson, an avid walker, said making the city more walkable is a strategic priority and the benefits of getting around town on foot are many.

“Obviously walking is a healthy thing but when you walk, you notice things you wouldn’t when you’re driving,” Johannson said.

“I’ve been walking these streets for years and you get to know your city better. Manitoba Avenue East has so much to offer and when you walk you’re more connected to all that’s happening on the street. You’ll discover businesses that you might not have noticed before and I know that people have wanted safer walking options for years, so this delivers on something that is important to the community and it is aligned with our new Active Transportation Strategy.”

Charlene Farrell, who opened Emerald Club Tattoo on Eveline Street in 2021, said she and her husband grew up in Selkirk and are thrilled to be in business on the city’s historic avenue.

“After seeing the photos of the project, we are looking forward to and excited for the changes that are coming,” Farrell said.

Lorraine Benjamin, long time Eveline Street property owner and resident, said the area is perfect for walking and the change is long overdue.

“We have been waiting to see changes to Manitoba Avenue East, Eveline and the Waterfront for 25 years and are so glad it’s happening now,” Benjamin said.

“This area is meant to be pedestrian friendly and accessible.” 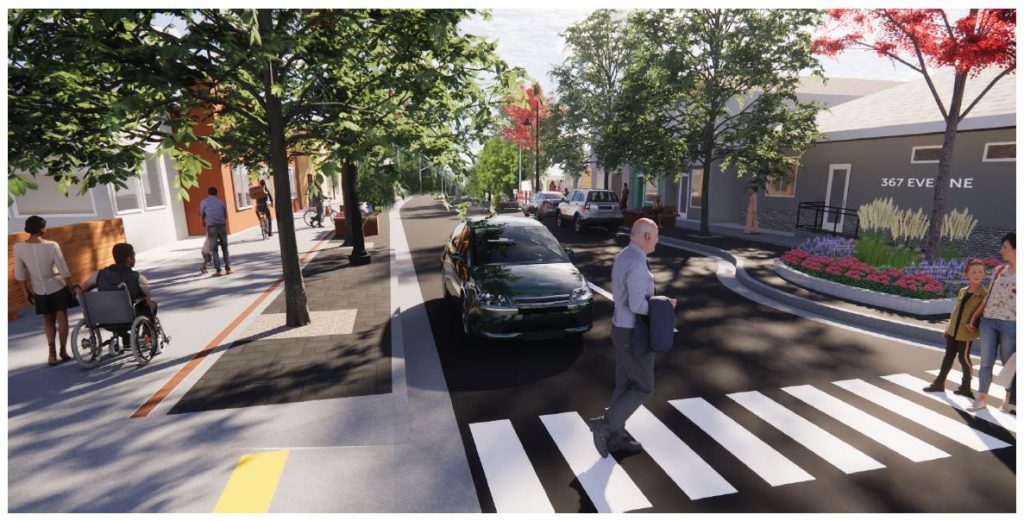 The project aligns with Selkirk’s Downtown Renewal Strategy that aims to transform the downtown area into a place where people want to be. McDermid said the reconstruction will make Eveline safer and more desirable for pedestrians, cyclists, people using mobility aids, and motorists.

“Active transportation is very important and these improvements will link Eveline to Manitoba Avenue making it safe and easy for people to walk, wheel or bike from the west end of Manitoba right to Eveline and then north to Selkirk Park,” he said.

There will be numerous other features that will make the street safer for pedestrians, including pedestrian peninsulas at intersections that give motorists a heads up that a crosswalk is ahead and reduces the distance walkers have to travel to get from one side of the street to the other. This is especially beneficial for folks with mobility issues or aides and those pushing strollers or walking with young ones. 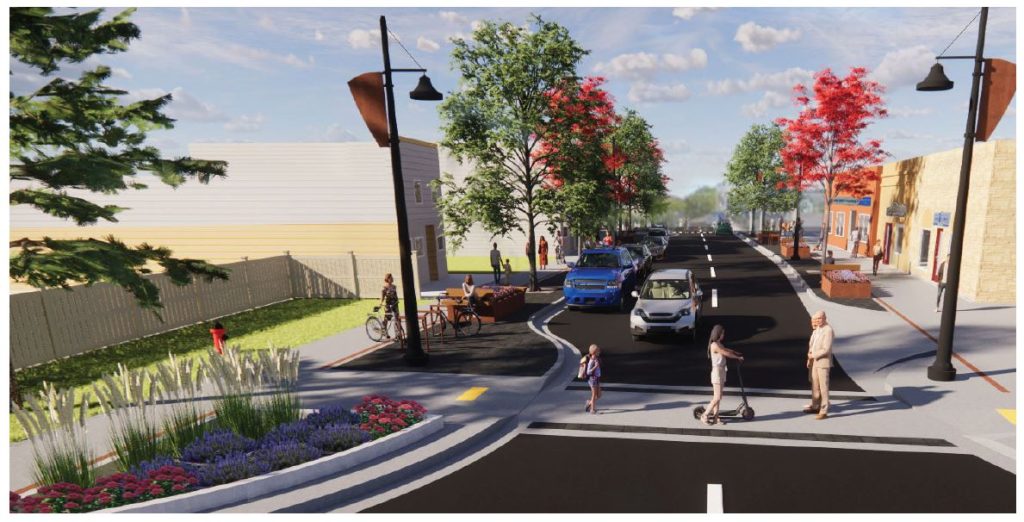 “Instead of having to cross four lanes of traffic, they’ll only have to cross two so it’s quicker and less dangerous to cross the street,” McDermid said.

There will also be detectable tiles for improved safety for the visually impaired.

The Waterfront approach will be improved and an accessible sidewalk will run from Eveline down the North entrance right to the York boat statue. Every sidewalk approach in the reconstruction area will be accessible so people with mobility issues and those in wheelchairs can easily move from the street to the sidewalk and the sidewalk will be level with business’s entranceways.

“It’s important for us to meet these modern standards and while doing so, we plan to recapture elements of the street’s natural state by reintroducing trees to the area to not only provide shade but to absorb excess storm water,” Nicol said.

“Not only does this help us fulfill our Climate Change Adaptation Strategy (CCAS) which is integrated into all of our work, it also restores the look of the street to its historic roots. Trees were a key element of the early Eveline streetscape”. 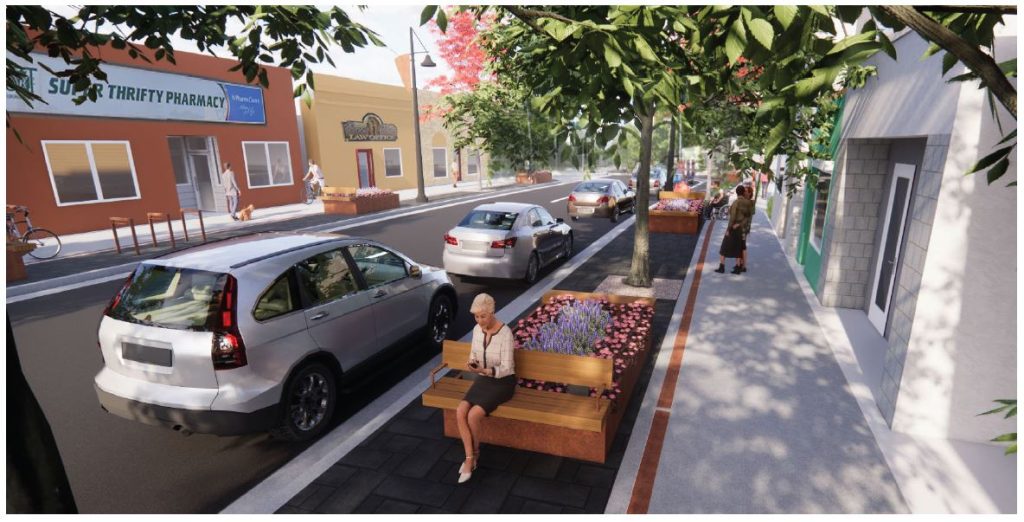 The city will spend $800,000 out of a Canada/Manitoba Investing in Canada Infrastructure Program (ICIP) grant for street trees. The street trees planted along Eveline will benefit from innovative soil systems the city is putting in place to facilitate healthy tree growth.

The reduced street width at intersections, along with the addition of boulevard trees are also a natural slowing mechanism for drivers, again, making the street safer.

Eveline will also see the city’s first traffic circle at the entranceway to Selkirk Park. Studies prove that traffic circles are safer in many ways and less expensive to build and maintain than traditional intersections.

Kaili Brown, Landscape Architect with HTFC Planning & Design, working on the Eveline project said a traffic circle at this location, Selkirk’s tourist and local hotspot is the safest option for motorists and pedestrians. 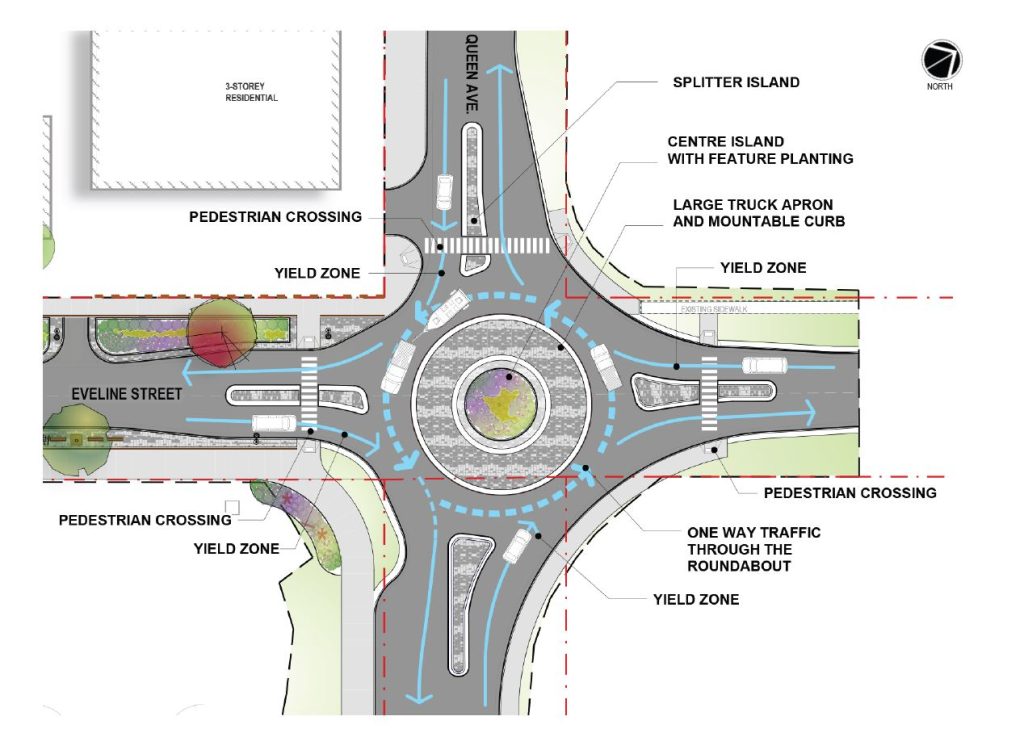 Render of traffic circle at Eveline and Queen

“Not only will this reduce traffic delays and congestion, it will naturally calm driving speeds while allowing motorists to yield to pedestrians before entering and exiting the circle. In the event a collision should occur, the results are typically far less severe than at a traditional intersection.”

Dan McDermid agrees that the traffic circle is in the perfect location and states it will be a beautiful addition acting as a statement piece.

“The entrance to our busiest park that’s located beside the Marine Museum, another feature location in the city, is the perfect spot for something that’s so aesthetically pleasing.”

Work will be done one side at a time, allowing one-way traffic at all times throughout the duration of the project which is set to be complete in October of this year.

The Eveline Street reconstruction project was awarded to JC Paving at the Feb. 7 council meeting.

“An out-of-town visitor, a young person choosing a place to live, an entrepreneur opening a new business, each one of these people is looking for a place to fall in love with. A redefined Eveline Street can be a beautiful public place that inspires us, connects us, invites us to linger, to shop, to visit, and to live. As a great urban street, it can offer a joyful experience that invites people to fall in love with Selkirk and its historic downtown. Investing in great places for people is an investment in the social, cultural, and economic fabric of the community, and it defines the kind of city that will be passed on to the next generations.” -Brent Bellamy, business columnist for the Winnipeg Free Press.

Selkirk one step closer to largest industrial investment in over 100 years
September 7, 2022
Stay in the know! Archives
Go to Top