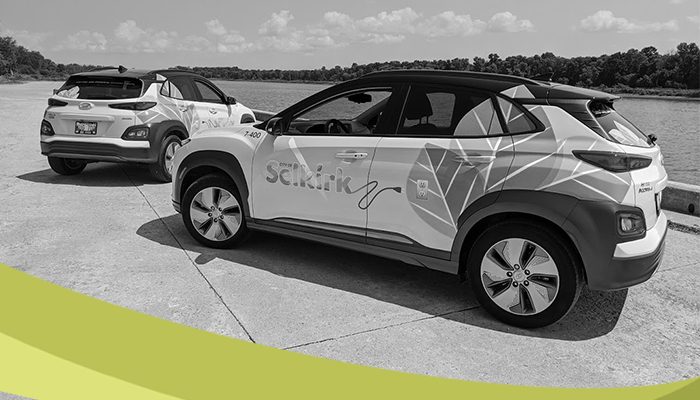 World leaders have travelled to Glasgow, Scotland for COP26, the UN’s Climate Change Conference, but the City of Selkirk is literally driving action on climate change in two electric vehicles and two hybrid SUVs, with plans to purchase two more electric vehicles in 2022.

The two EVs have been driven a combined 5,486 km since they were purchased this past spring. When compared to their gas-powered equivalent model, which uses on average 7.9 litres of gas per 100 km, the city’s financial and environmental savings really add up. The gas version would have burned about 433.39 litres that would have emitted 996.8062 kg of CO2 (carbon dioxide) and at gas prices where they are now, would have cost the city approximately $632.32.

Mayor Larry Johannson took one of the electrics to the City’s Caucus meeting in Dauphin in September and still can’t get the smile off his face over how impressed he was.

“I calculated it out before I left and figured I’d have about 40 K left when I got there, and sure enough I had 46 K left when I pulled up. The hotel had a charger so I charged it up and came back home the next day. It was a pleasure to drive and I was 110 per cent happy with the trip.”

The hybrids are mainly driven on their electric charge, but can switch to gas if required. The duo have been driven a combined 14,026 km and used 873 litres of gasoline. By comparison, one of the city-owned trucks that is still gas powered drove 13,289 km – 737 km less than the hybrids – and used 4,682 litres of gasoline, more than five times more fuel.

The hybrids, when compared with the fuel usage of a city-owned, gas-powered truck saved 4,068.7 litres of gasoline, which translates into $5,936.23 saved in taxpayer dollars, as well as 9,358 kg of CO2 from being emitted from city activities.

In total, between the four vehicles roughly $6,568.55 has been saved in avoided gas bills and 10,354 kg (or 10.354 tonnes) of CO2 were avoided. To understand how significant that is, one tree in 100 years can absorb approximately 1 tonne of CO2. By changing the city’s habits around driving (with just four of the vehicles in just one year) the city has avoided emissions equivalent to what 10 trees could absorb in a century.

Selkirk CAO Duane Nicol said the city’s fleet of passenger vehicles and heavy equipment account for between 45 to 42 per cent of the city’s corporate emissions each year. In 2020 that amounted to 330 metric tonnes of fleet generated CO2 equivalent. As more electric and hybrid models become available, the city will be able to decarbonise more of the fleet.

Fleet on schedule to be replaced by 2030

“As part of our Capital Asset Management Program, we regularly replace vehicles at the right time in their life-cycle to maximize economic value to the city. Each time a vehicle comes due for replacement, we’re re-evaluating that asset’s duty to determine which kind of vehicle we actually need and when we go to market, we are looking to replace it with an electric or hybrid model if possible. Now with new electric trucks becoming available, it’s likely we’ll have most, if not all, of the fleet replaced by 2030,” Nicol said.

In addition to the reduction of fuel costs, Nicol sites recent studies that show EVs require much less maintenance than a gas-powered vehicle, spending as little as half the cost of the average vehicle maintenance bill.

“When we did the analysis of EVs for the city, the fuel savings alone made the decision to replace our gas-fleet a smart business decision. Add to that the average savings of $4,600 in maintenance costs and cost of future carbon taxes, and you have the potential for a significant financial return to the city on top of the environmental benefits of eliminating emissions. For the city, it doesn’t just make sense, it makes dollars.”

To help its citizens drive action on climate change, the city is installing its first public charging station later this year.

Climate change will require action from all levels of government. The City of Selkirk is proud to be contributing to action on the biggest problem facing the planet right now.