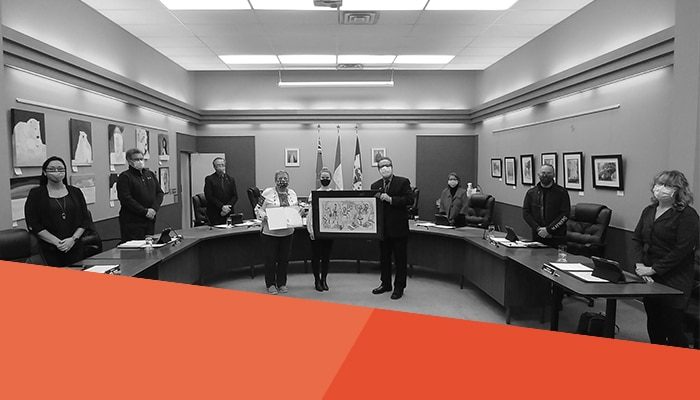 The City of Selkirk is synonymous with many things, from the steel mill to world-class catfishing on the Red River, and alongside those iconic flag bearers of the city is the Troyanda Ukrainian dance ensemble, which celebrated 40 years together in 2019.

Born out of the Selkirk and District Ukrainian School of Dance, which was established in 1972 and operated out of the Holy Eucharist Hall, Troyanda members have entertained around the globe, and, have always kept Selkirk in their hearts.

The group presented a framed, commissioned, original print by Terry Pitts to the City of Selkirk in recognition of its hometown. A card to Mayor Larry Johannson and council read, in part:

“Troyanda Ukrainian Dance Ensemble has 40 years of home within the city. Most of our dancers, current and alumni, grew and learned within your city limits.”

Johannson said he and all members of council are proud of Troyanda and join its members in celebrating their success.

“The Troyanda dance group has reached an incredible milestone and they’ve done it with class, dignity and grace,” Johannson said.

“They are ambassadors for this city and they have represented us well all across the globe. We congratulate them on their success and wish more of the same in the years to come.”

Carina Romagnoli, a Troyanda dancer and board chair person, said the group is proud to have its roots in Selkirk and equally proud to represent Selkirk on dance tours throughout Europe, South America, the United States and across Canada. Most recently, they did a two-week tour of the Ukraine in 2017.

“We are very thankful to the City of Selkirk for allowing us the opportunity to have our home based in Selkirk for the last 40 years. There have been multiple families of dancers and generations of dancers that have resided in Selkirk and walked through the doors of Memorial Hall,” Romagnoli said.

“We’re continually appreciative of everything the city does and continues to afford to us.”

Romagnoli, a Winnipeg resident, said she and a friend joined Troyanda after high school. Dancers hail from Selkirk, but also from around the Interlake and north Winnipeg, she said, because the group is special.

“We tried out and I absolutely fell in love with the group. It’s a very unique group in the sense that everybody is family, everybody is very welcoming,” she said.

“You feel a sense of belonging and a sense of community…it’s a really nice place to be.”

Now in it’s 41st year, Troyanda, like all other organizations, has been impacted by the COVID-19 coronavirus.

Romagnoli said the group moved to rehearsing online in the spring and then in summer worked on rebuilding community within the group with some social distanced hiking. In the fall, they returned to in-person practices, but have now split into two cohorts – one will practice in person and the other online from home.