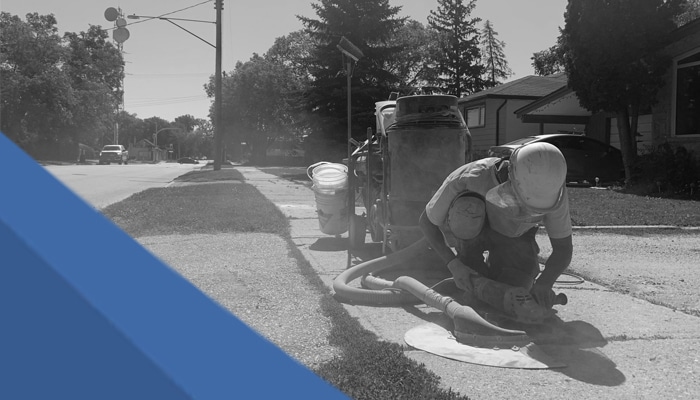 The City of Selkirk’s Strategic Plan calls for the smooth operation of transportation systems as part of its priority to provide safe and sustainable infrastructure.

A detailed assessment of all city sidewalks was done in 2018 and since that time the city has been doing targeted repairs to areas that were damaged or deteriorated and considered trip hazards.

“We’ve always done sidewalk assessments, but it was never to this detail,” said Dan McDermid, Director of Operations.

“We’re now able to fix our sidewalks panel by panel versus waiting for complete deterioration, and when you do small pieces at a time you keep your costs down as well.”

In previous years, assessments were generally conducted by summer staff, who did visual checks. It was difficult to find contractors willing to do small piecework, so repairs were done in large chunks, replacing as many as 100 panels at a time.

“This is another example of how our Capital Asset Management Program is bringing enhanced tools, new systems and leading practices to bear on our infrastructure challenges. We now use a standardized system to assess our sidewalks, identify and record deficiencies, which allows us to plan and budget to address these problems,” Nicol said.

“We get a lot more work done and a lot more problem correction for the same amount of money that we’re spending.”

This also gives the city an opportunity to correct accessibility issues that are found throughout the city.

“We’ve put a commitment into making our community more inclusive, and that means allowing everyone to have the same opportunity to use our sidewalks and other walking paths,” said McDermid.

“A lot of these sidewalks were first put in decades ago, without putting wheelchairs or accessible entry and exit points into consideration. A slight elevation change isn’t a big deal to most, but it could be a huge obstacle for someone in a wheelchair.”

Planning ahead to save time and money

In 2018, the city contracted Safe Sidewalks to do an assessment of the 55.5kms of sidewalks in the city and what degree of trip hazard they posed to those walking on them. Using a condition assessment scale of 1-5, with 5 being an extreme trip hazard, the company created a GPS map with ratings indicating the state of sidewalks.

That September, they returned and repaired 138 locations throughout the city that had a 30 mm variation in surface level. This was done by using a new cement grinding technique that levels rough and blunt areas to make them flush with the rest of the sidewalk eliminating the need to replace them.

“These situations are a bit more complicated and costly as many sidewalk panels and the sidewalk base have to be changed. We’re integrating these improvements into nearby capital projects to make the work more cost-effective. We just don’t have the resources to replace all 250 of them at once, but overtime, we’ll correct all of those deficiencies,” said McDermid.

“It’s an extremely cost-effective way of prolonging the life of the sidewalk and making our active transportation network safer for people,” Sicinski said.

“We have a couple of guys on staff that are very familiar with concrete, so we’ve been able to have them patch up holes that need immediate attention. We also have trained arborists on staff that’ve been trimming some of the trees and the vegetation that affects visibility around some of the sidewalks”

Learning from past experiences

A scheduled three-year assessment will take place next year and Sicinski says they’ll be able to see what’s working and what can be improved upon.

Nicol said the sidewalk repairs is aligned with the community’s Strategic Plan which call for the city to ensure smooth operation of its transportation systems, to ensure adequate funding for maintenance of all city-owned assets, and more active management of capital assets.

“Our sidewalks are an important part of our transportation network and increasingly so as people look to more active forms of transportation for health and environmental reasons. They are a vital element of our city infrastructure and through CAMP we’re seeing some significant improvements.”