Manchester infrastructure upgrade complete; near $3 million investment yields new surface and everything underneath 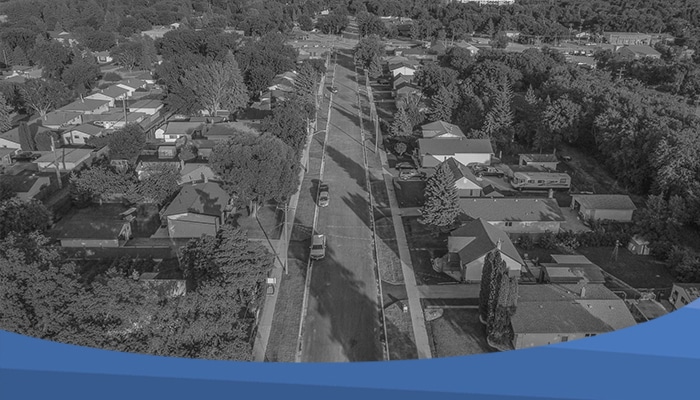 Folks living on the 400, 500 and 600 blocks of Manchester Avenue are now residing on the newest street in the City of Selkirk and for the next 30 years or so, shouldn’t see construction activity as the view from their front windows.

Construction began on Manchester in the summer of 2018 and wrapped up this week on what is a total replacement of the street itself and a renewal of everything underneath it, including separating combined sewers.

Mayor Larry Johannson said work on the three blocks on Manchester Avenue is a perfect example of the city’s Capital Asset Management Program (CAMP) in action.

“Our CAMP team identified Manchester as a priority because of the condition the sewer was in and now it’s been completely rebuilt. We’ve been there for three summers in a row but now the job is done and we won’t be back anytime soon,” Johannson said.

“I know it’s tough to have construction on your street, but there’s a reason behind it and now those citizens have the best infrastructure on their street and under their street. The storm sewer separation is a big one.”

Fixing everything above and below the surface

The city has invested into the three blocks since 2018 to do sewer replacement, land drainage installation, water main liner, sewer liner and a new road surface.

And while it’s a significant investment, it’s all part of Selkirk’s efforts to chip away at the city’s infrastructure deficit. The latest numbers, which are from 2015, show the replacement cost of all the city’s infrastructure is $293,168,668. More current numbers for  replacement costs will be even higher and will be available in the coming months.

Dan McDermid, Director of Operations, said the city uses asset management to project future work and plan for the investment. He said the 2016 Water Rate Study, which was approved in 2018, allowed the city to put money into its water utility reserves, so money for this project was already in reserve funds.\

In fact, all money for the entire project came out of reserve funds.

“Asset management allows us to project the money that we’re going to need and build that into the tax rates so that rather than hitting citizens with a one time large increase or wild fluctuation in the tax rate, we have a slow and consistent tax demand that allows us to have the resources to do this work in a proper timeframe,” said Duane Nicol, Chief Administrative Officer.

The city has a long-term plan to separate all combined sewers, which can cause basement back ups during high rainfall events.

“The Manchester sewer was the driving force for all of this, it was in very poor shape,” McDermid said.

“The sewer on Manchester serves a larger area, it’s not just localized, it takes sewage from other neighbourhoods so under our asset management plan it takes a higher priority. If it were to fail, it would have a big impact, potentially 200 or more houses, so it’s important to complete this work.”

“The benefit of this work is it prevents unplanned service interruptions which can be pretty impactful to residents, and can be very expensive. We are moving away from the old break-fix model of infrastructure management. Strategic asset management, based on collecting and analysing good data and using industry leading practices provides better value of dollar and far better service to citizens,” Nicol said.

“If the water line breaks or sewer collapses, we’re going in there unplanned and doing that work at huge costs and huge delays in terms of interruption to the streets. So good asset management drastically reduces the probability of those failures.”

Saving your basement from disaster

Separating the combined sewers is a priority under the city’s Climate Change Adaptation plan as well.

“The storm separation is beneficial because we know there’s going to be more frequent storms and more severe storms,” McDermid said, citing the recent rainfall and subsequent flooding in the City of Brandon as an example.

“We now expect those kind of weather patterns and separating the combined sewers helps expand the capacity of our storm network.”

The pipe being put into the ground today is PVC and the contractor has suggested it can last between 50 and 80 years. McDermid said since PVC has only been around for about 40 years, there’s really no telling how long it will last – it could be much longer.

“We have pipe that’s much older than that and made of concrete. This is all PVC, which is the best material of the day, concrete deteriorates due to the toxicity of the wastewater, whereas PVC does not,” he said.

The city also tackled some of the work itself. McDermid said city crews did the land drainage on the eastern side of the lane behind Jeff’s Mall and onto Manchester.

“That’s something we typically in the past would have contracted at a much higher price,” Nicol said.

“Part of asset management is building the capacity with our team, making sure that we have the training, the tools, and the know how to be able to do some of this work. So we can bring some of this work in house for our staff to do and do it more cost effectively.”

In the first year construction went from May to October and this year, was wrapped up in early August. McDermid said in Year 1 they discovered some ground conditions that weren’t favourable and caused delays. In years two and three crews changed the plan and were able to get the work done quicker.