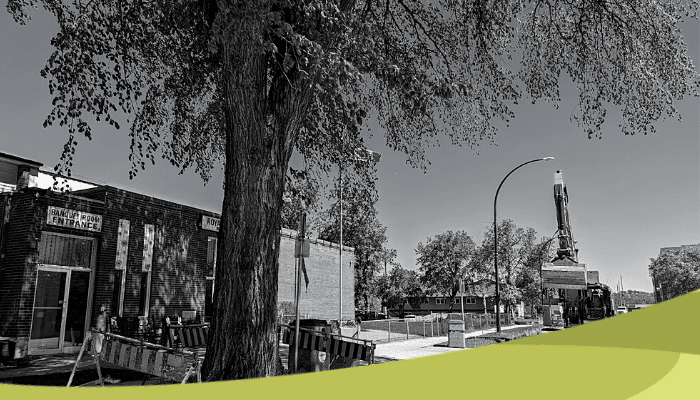 The lengths the city went to recently to save a decades old elm tree in front of the Selkirk Legion along Eveline Street demonstrates Selkirk’s commitment to the environment, its street trees and urban forest.

The roots of that commitment run deep, evidenced by the recent hiring of Mihali Schindle, the city’s Urban Forestry and Naturalization Coordinator.

Schindle said protecting the elm, which he estimates to be about 80-years-old, was important to the city and he and other staff worked with contractors during the Eveline Street reconstruction to ensure the tree would survive.

“It’s a huge tree, one of the city’s oldest and nicest, and obviously we wanted to preserve it,” Schindle said.

“We had several discussions with the excavation crew, as well as the planning crew for Eveline to try and figure out a way that we could limit any damage to the root zone as we rebuild the road.”

Schindle said a portion of the roots near the street side were in the direct path of the excavation route, and if those roots were damaged the tree would be under much stress.

They had to get creative in their planning for the tree to have any chance.

“If we were to just go ahead and dig up and damage half the root zone, it would be inevitable that tree would die. So we needed to come up with a different method for carefully exposing the roots and protecting them long term,” he said.

“We decided we would protect the root zone on the road side by creating a garden bed that would go out on the curb side about three meters and that would allow for additional soil to be put back down on the root zone instead of paving over this area.”

Schindle also worked with an arborist to identify other areas where the tree’s roots were in the excavator’s path and they painted identifying lines on the pavement or dirt and the contractor agreed to maintain a higher excavation height to reduce or eliminate damage to those roots.

The city has developed a long-term care plan for the tree that includes watering, fertilizing and maintenance, as well as monitoring it for Dutch elm disease.

The cost to save the tree was less than removing it, and ultimately in line with the city’s Strategic Plan that makes environmental stewardship a priority, calling for the protection of natural resources, more responsible development and water conservation. Moreover, the loss of the services provided by the massive tree would cost both the city and the neighbouring Legion for years to come as replacement trees would take decades to mature enough to provide equivalent benefits.

The timing of the Eveline Street reconstruction was perfect for the preservation of the elm tree. Dan McDermid, the city’s Director of Operations, said the emergence of Selkirk’s Capital Asset Management Strategy, Street Tree Policy and Climate Change Adaption Strategy ultimately saved the tree.

“This wouldn’t have happened ten years ago,” McDermid said.

“We’re evolving and we’ve changed the way we do things in the City of Selkirk. We’ve put more emphasis on our natural assets, we’ve conducted three years of tree surveys to know exactly what we have in the city and we’re committed to protecting and enhancing our urban forest.”

City CAO, Duane Nicol said the city is incorporating trees and other natural assets into its award-winning asset management program because of the immense value and services they provide to citizens.

“In a warming climate they also reduce heat and provide shade. Recent studies show they can reduce the street level temperature by at least 8 degrees on average and reduce air conditioning demand of shaded buildings. Investing in trees makes excellent financial sense. It delivers a positive return on that investment.”.