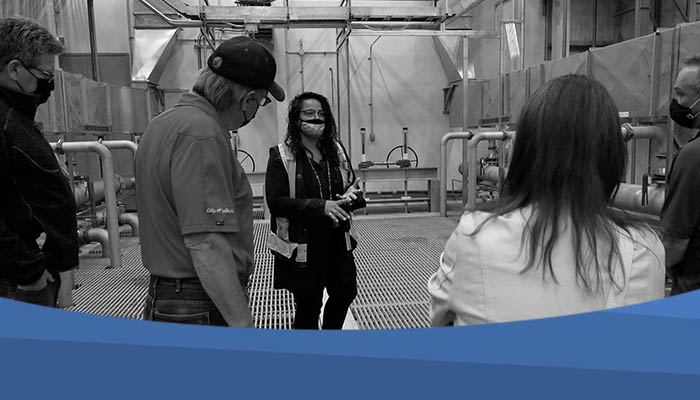 With Selkirk’s wastewater treatment plant nearing the end of its commissioning process, it’s clear the city’s investment in state-of-the-art technology is paying off for citizens, for the environment and everything that lives along the Red River and by Lake Winnipeg.

A bottle of treated effluent is as clear as a bottle of water from your tap, and it’s safe to drink as well.

“It is the clearest treated wastewater I have ever seen,” says Raven Sharma, Utilities Manager for the City of Selkirk.

“I’ve never treated wastewater that clear, so by using state-of-the-art technology, that’s the type of wastewater that we’re putting back into the environment. That’s cool.”

Sharma said she actually couldn’t believe what she was seeing.

“I was in shock because I have seen other membrane filtration working in Manitoba and I’ve never seen anything this clear. It gave me Goosebumps,” she said.

“I think this is amazing because I take pride in the environment. It makes me feel really good about what we’re doing. We’re putting this into the environment and thinking about the fish and all the aquatic life. We’re thinking about our impact on these ecosystems. We’re doing the right thing by investing for the future. It’s huge.”

The treated wastewater is pumped into the Red River where it ultimately makes its way to Lake Winnipeg. Pumping clear water that is safe to drink into the river is about as big an environmental win as you can get.

“The plant does an amazing job with the water citizens flush from their toilets, it’s cleaned and filtered and will help protect the Red River and Lake Winnipeg not only today but for the years to come,” Sharma said.

The city’s Environmental License requires the plant to be operational for 18 consecutive days and meet all the federal and provincial guidelines. This process ensures the plant is functioning the way it should and that the cleanest end product is being released into the river.

“When commissioning is complete that’s when the keys are handed over and the City of Selkirk is the official owner,” Sharma said.

Largest investment ever to benefit Selkirk for years to come

The almost $40 million plant is state of the art – and the city’s largest capital investment ever – and will treat effluent to a higher standard than provincial regulations. It can handle Selkirk’s present-day population and up to 11,000 more from day one, with the capacity to cost-effectively and easily expand in the future.

The city’s old plant was built in 1976 and does not meet current provincial regulations that require treated wastewater, or effluent, to contain no more than 1mg/L of phosphorus and 15 mg/L of nitrogen. The new plant’s phosphorus levels after treatment are 0.3mg/L and nitrogen is 3mg/L.

The new plant’s Membrane-Bioreactor Treatment process, which provides the best environmental protection for the Red River and Lake Winnipeg, is producing an exceptionally high quality of effluent, so if regulations change in years to come, the city will still likely meet the standards without costly retrofits or new construction.

Dan McDermid, the city’s Director of Operations, said the city is using Fibracast’s membrane technology and the Selkirk plant is the first full-scale plant of this size in Canada.

“They have plants in Singapore and some in the United States that have it, but other than some industrial plants and small-scale ones here, we are the first big plant in Canada.”

Sharma said the new plant is another step in Selkirk becoming an environmental leader, not only in Manitoba, but across the country.

Seven lift stations throughout the city push wastewater to the plant where it goes through four phases before it comes out the other end as clear water – the headworks, bioreactors, membrane and finally ultraviolet.

Sharma says it’s not just the membrane filtration that makes the plant so efficient, it’s the system’s headworks that make a big difference.

“It’s not just the membrane filtration, that’s just a part of it. A lot of other wastewater plants don’t focus on the headworks, which is the removal of all the organics, the foreign materials, the bacteria, and the grit. We have a really amazing headworks that goes through everything like a fine-tooth comb,” she said.

“Our headworks does a lot of the work for us. It’s the grit removal and it gets all of the organics and inorganics.”

From there, the wastewater goes through a compaction process that removes any larger particles still remaining and focuses on the fine grit, which extends the life of the plant’s equipment because it’s not getting into the plant’s membranes and bio-reactors.

“It’s great for the life expectancy of our other equipment,” Sharma said.

The bioreactors add oxygen into the water, allowing it to be aerobic. In the membrane phase, activated sludge is constantly returned to the bioreactor. Sharma said it’s good bacteria that they’re not losing.

The final phase is the ultraviolet, which addresses any of the remaining viruses, in this case E-coli, coliform bacteria and fecal coliform.

McDermid said the city hopes to be able to decommission the ultraviolet in about a year, after the membranes prove themselves and the UV treatment is no longer required.

The plant aligns with all five priorities of the city’s Strategic Plan – a vibrant, safe and healthy community, a strong and stable local economy, safe a sustainable infrastructure, maximum value from community resources and environmental stewardship. It also fits with the city’s climate change mitigation and adaptation plans.