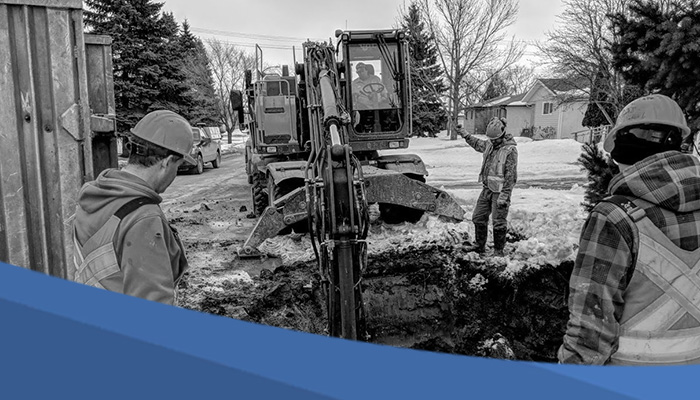 To build great things, you have to start from the ground up. But to build toward a more climate resilient city, the construction is starting below the ground.

The city will be separating the combined sewers, a critical objective of the city’s award-winning Climate Change Adaption Strategy (CCAS), down Sophia Street between Centennial and Selkirk Avenues. With help from the Province of Manitoba’s Disaster Prevention and Climate Resiliency program, the city is able to do some of that work in 2021.

Mayor Larry Johannson said the separation of the sewer system is a perfect example of the city’s Capital Asset Management Program (CAMP) in action.

“Our CAMP team identified this stretch of Sophia St. as a priority because of the condition the sewer was in and because as a combined sewer it needed to be separated.,” Johannson said.

“We appreciate the funding received by the Province of Manitoba to help us with our climate change work. I thank them for partnering with us to make Selkirk a more resilient and sustainable community. We have a strong vision for Selkirk and we have the plans to get us there. This investment helps. We look forward to more opportunities to partner with them in making Selkirk, and therefore Manitoba, more climate resilient” said Johannson.

Following site preparation and pre-construction completed by the city, construction will begin on January 18th. The remaining costs are projected to be $371,000 and will covered by the Province’s aforementioned Disaster Prevention and Climate Resiliency program.

“We didn’t just throw our name in a hat and hope for this best for this grant. It was years of hard work creating and following our CCAS and our asset management program. Our CAMP team identified this project, which we already had planned, because it fit the parameters of the grant which allows us to cover some of the overall costs,” said the city’s Director of Operations Dan McDermid.

“Sewer separation is a priority we outlined in our CCAS. Coupled with the fact that we’ve identified the quality of the current sewer pipes to ‘poor,’ we gave the Province a situation that would make it difficult for them to say no.”

Combined sewers are an old system where both stormwater and sewer systems are merged into one pipe. While this tactic is cheaper for developers, they have a limited capacity during high rainfall events, and can be harmful to the environment.

“Its an expensive endeavour, but a critical one. Achieving full separation will takes tens of millions of dollars over the coming years. But by using our asset management program we’re creating opportunities to link this work with other projects and therefore do it way more cost-effectively, “ said Nicol.

“The most recent and notable example was down Manchester Ave. over the last 3 years. We were not only able to do the essential combined sewer separation work, we also identified that the road needed to be completely redone and the water main needed to renewed,”

Over the last 3 years, around 520 metres of combined sewers were separated down Manchester Ave., as well as the re-lining of the water mains and the full reconstruction of the road.

McDermid says separating the sewers is a no-brainer, given the short and long-term benefits for both citizens and the city.

“Because of climate change we’re seeing more severe storms, that’s a fact backed by science and statistics. This brings more rain at once, which our current system has trouble handling at times, and can result in sewage backup or basement flooding in your home. Having a dedicated stormwater system greatly decreases the chances of this happening,” said McDermid.

“With a combined sewer, the unfortunate side effect is that there can be some overflow into the stormwater system which means diluted, but untreated, sewage flows into the Red River. Separating these systems makes sure there is no overflow and each gets directed to their proper ending points. Every metre of sewer we separate reduces the risk to citizens and our environment.”

Nicol says that the citys climate change adaptation work and its asset management program are aligned well with both provincial and national priorities. As a result, the city is better able to make use of grant programs because there are shovel-ready projects to apply with.

“Our team has developed two leading-practice programs that are getting attention nationally. Selkirk’s commitment to good infrastructure planning and environmental stewardship is making our community more sustainable,” said Nicol.

“When the federal or provincial governments have money – we have projects. In the long-run that means more work in Selkirk with less property tax burden on our citizens”.