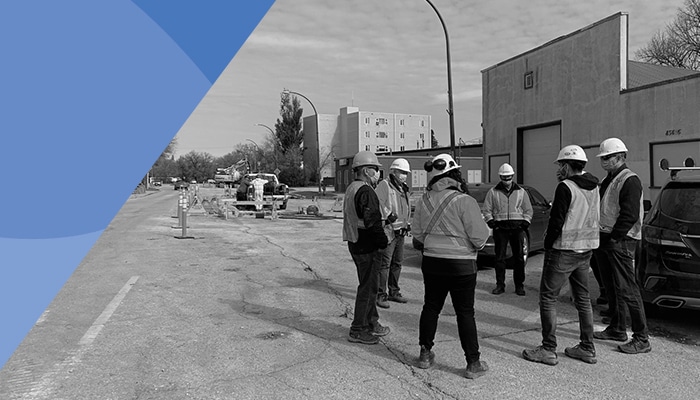 A water main relining project this past fall is the most recent example of Selkirk and Winnipeg working together to improve services to citizens while keeping costs low in both cities.

Members of Winnipeg’s Water and Waste Department took the drive north to watch the cleaning and relining on Main Street from Lake Avenue to Manitoba Avenue, a technique Selkirk has used several times in recent years.

The process of relining instead of replacing fits into Selkirk’s asset management scheme nicely says Director of Operations Dan McDermid, because it extends the lifespan of a city asset and does so at a fraction of replacement cost.

“With information collected from the Capital Asset Management Program (CAMP) registry, we were able to compare the cost per meter for water main replacement versus water main relining,” McDermid said.

“By doing this lining project instead of a replacement project in the future, there is a cost savings to the city of more than $400,000.”

Those are the kinds of numbers that catch your eye and a big part of the reason Winnipeg’s representatives came to take a look.

“Our goal as asset management professionals is to manage our infrastructure in order to deliver core services to the citizens of Winnipeg.  With aging infrastructure becoming an increasingly important issue for many municipalities across Canada, opportunities to share ideas and collaborate with peers from other cities are valuable.  It allows us to expand our knowledge base and toolbox for managing the infrastructure challenges we face,” said Cynthia Wiebe, Asset Management Engineer at the City of Winnipeg, Water and Waste Department.

“Seeing the water main lining that Selkirk was installing to protect their water distribution infrastructure, and connect with new colleagues, was one such opportunity and helps us stay on top of new and innovative techniques to operate, maintain and rehabilitate our key infrastructure assets.”

McDermid said the meeting was benficial.

“Winnipeg hasn’t done water main lining in the past and they brought a team here to observe,” McDermid said.

“We had some good conversations and now they’re looking at maybe doing this, so it’s a good thing.”

Learning from each other

Megan Jakilazek, Asset Management and GIS Technician with the City of Selkirk says partnerships are important and will benefit both cities moving forward.

“We are starting to form a relationship with the City of Winnipeg so that both entities can work together to improve asset management practices in Manitoba,” Jakilazek said.

“This is the beginning of developing a relationship that allows an easy flow of information from Winnipeg to Selkirk and vice versa and it starts to create a community of practice that we can have constructive conversations that both can benefit from.”

Another example of the two cities benefiting from this information exchange is the City of Selkirk adopting Winnipeg’s construction specifications, which are the most stringent in the province, and will provide longer life for city streets.

“Asset management is a strategic priority for Selkirk. Building these connections has been integral to building a program that is widely recognized as among the leaders for a city our size. The value here for citizens is that we are learning from industry leaders how to better spend our limited infrastructure dollars. Better services for less, that’s the goal,” said Nicol.

Selkirk has been opting for water main relinings, when possible, for the past three years and was among the first in the province to take advantage of the practice. Though the technique was been used in Europe for about 25 years, it’s fairly new in Canada. Induracoat, a Canadian company, has handled the work in Selkirk.