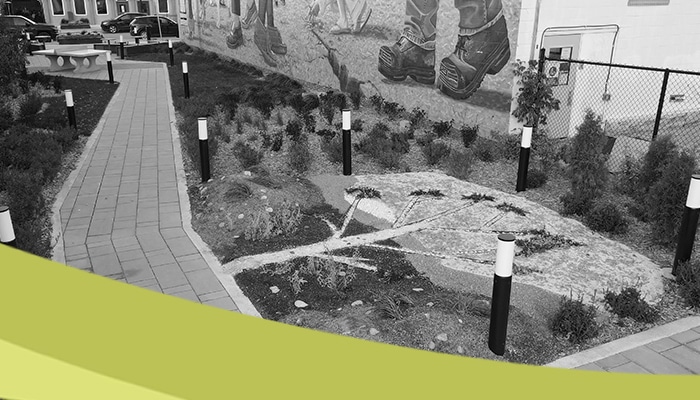 For Jeannie Red Eagle the official opening ceremony of the Manitoba Avenue East Anishnaabe Mashkiki Gitigaan – The People’s Medicine Garden on September 24th must have felt all at once like a long time coming and as if it happened in the blink of an eye.

Red Eagle suggested an indigenous healing garden at a City of Selkirk open house on the revitalization of Manitoba Avenue last April. She had seen the conceptual drawings of the street and the inclusion of pocket parks along the avenue.

She spoke with CAO Duane Nicol and presented her idea, and now, not much more than a year later, the healing garden is firmly rooted in its own pocket park.

“Everything fell into place. It was last April, just a little over a year later and now here it is,” Red Eagle said.

“Things don’t move that quickly unless everything is aligned  in other dimensions, not just in the physical realm.”

It certainly seems like everything has come together quite nicely. On a chilly day for an opening ceremony, there were people from all walks of life wrapped in the warmth of celebration and respect for an idea that has brought the community together.

Selkirk Mayor Larry Johannson said Manitoba Avenue East has been brought into the 21st Century with the revitalization project, and the healing garden will play a critical role in a bright future.

“I went to school with Indigenous people, we’ve played sports together, we’ve celebrated together, and we’ve worked together. To be mayor now in this community and have this beautiful healing garden here, it truly caps my life in Selkirk.

“We can’t change the past, it’s impossible, but together we can forge a new future. Together we will do it and this healing garden is a strong part of forging that new future together.”

Partnerships in the community brought garden to life 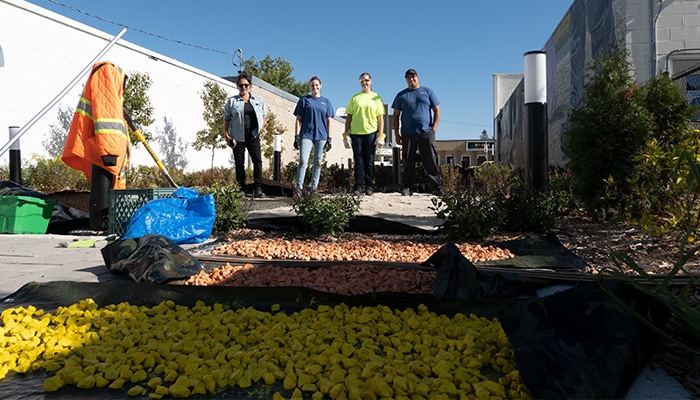 The indigenous healing garden came to fruition quickly after Red Eagle’s conversation with Nicol, but it’s a project she’s had on her mind for many years, at least since she moved to Selkirk in 2003.

She was on a journey to find her own personal balance in her life and while she worked on that, she was presented with an opportunity to work with Comp students  of the First Nations, Metis & Inuit Studies class and their teacher, Mark Walterson.

“That’s where it started to happen,” Red Eagle said.

The high school students embraced the idea of creating the indigenous healing garden and their role was crucial in its success.

“They’re very excited. This will be a continuing legacy for indigenous and non-indigenous students of the Comp. I shared with them that we all play a part in this, we all own it, and we can always come back to it.”

The ceremony opened with traditional drumming and stories by Elder Atkinson and Dennis Whitebird from the Treaty Commission of Manitoba. Walterson said their words  are important and that for many years Indigenous kids missed out on what was shared as part of their education. He was glad his students were there to hear them.

He added, “Anishnaabe Mashkiki Gitigaan – The People’s Medicine Garden will be a place where stories can be shared, and the entire community can benefit.

“It’s a place to be, to feel safe in times of peace and in times of turmoil, to hopefully be a stabilizing and steady place for you to visit.”

Walterson thanked the city for its support of the healing garden. 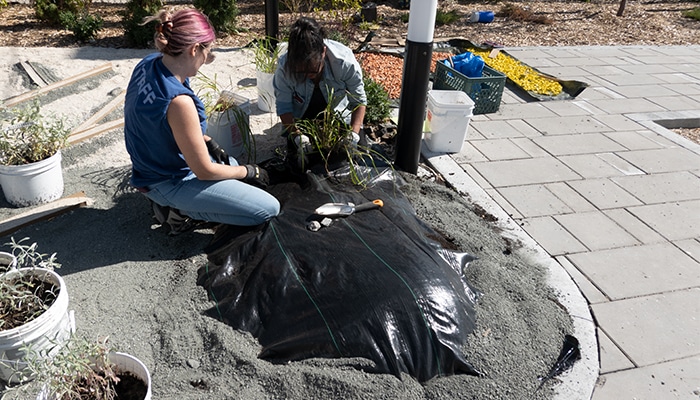 Angel Fredericks, the city’s utility clerk, said she was honoured to take part in the establishment of the garden.

“It was pretty revitalising to have an artist like Jeannie Red Eagle tell us what she saw for that blank space of dirt and what its end purpose was for – healing,” said Fredericks, who placed soil, moved quartz stones into place and helped plant sage and sweetgrass.

“It was cool to take her idea she had in mind and help her bring it to life, with everything made from the earth that embodied the four sacred medicines used by the First Nation people.”

For Red Eagle, the project and the spirit of cooperation that existed throughout give her hope. 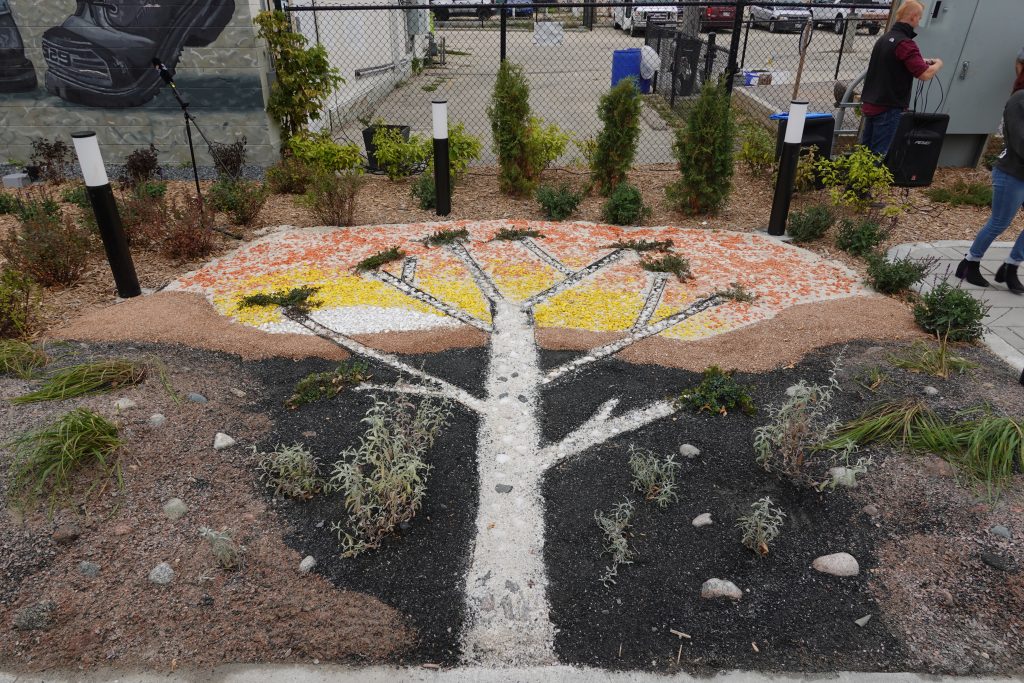 “Hats off to the City of Selkirk, who have fully supported everything we wanted and have asked, ‘what can we do, what do you need?” Red Eagle said.

“One of the purposes that we wanted for this garden is for it to be a place for cultural and educational purposes for community members Indigenous and non-indigenous to gather so that they can learn together. This is reconciliation in action.

“I want the community of Selkirk to be a role model for what can happen, for what other communities can do, not just across Manitoba, right across Canada. Why not?”