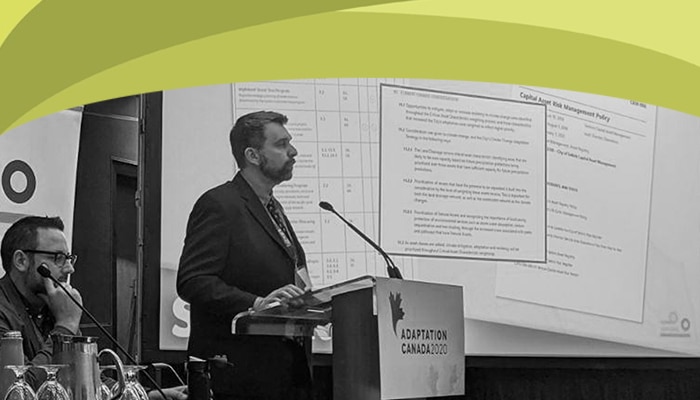 The City of Selkirk was recognized once again for its Climate Change Adaptation Strategy when Chief Administrative Officer Duane Nicol was asked to join the Prairie Climate Centre (PCC) and present at Adaptation Canada 2020 last month, before the government enforced a travel advisory.

Held in Vancouver from Feb. 19-21, Adaptation Canada is the country’s national conference on climate change adaptation.

“It was a very exciting opportunity for the City of Selkirk,” Nicol said.

“We got a lot of great feedback and learned a lot from the other sessions I was able to attend. The ancillary benefit to attending these things, other than presenting and helping Selkirk get the word out about the work that we’ve done, is taking in the sessions and learning from the best in the field.”

Making it a part of our operations

Nicol presented on Selkirk’s success in integrating climate change adaptation into its budget process and its day-to-day business, something that many others have failed to accomplish.

“I think we garnered quite a bit of attention because of the way that our plan is different than most other adaptation plans in that we’ve really closed the gap that typically exists between strategy and action,” Nicol said.

“By making it practical and integrating the proposed activities into the business of the municipality we took adaptation from a side project, sitting on someone’s desk, and made it part of our core government activities like asset management and budgeting. As we’re making regular business decisions about our infrastructure, we’re considering climate change impacts and by doing that we’ll be more adapted in the future.”

Helping others for a greater cause

More evidence that Selkirk is seen as a leader in climate change adaptation came when Nicol returned home from the Vancouver conference in the form of a CitizenSupport email request from a municipality in Ontario.

A municipal leader there had reached out to the City of Winnipeg’s Sustainability Office for advice on developing its climate change adaptation strategy, and Winnipeg directed them to Selkirk.

“Our goal from the start was to take a lead role in both asset management and the integration of climate change into our asset management program so to have others reach out to us to assist in their progress is fantastic,” Nicol said.

“Being asked to present at national conferences by an organization like the Prairie Climate Centre provides us with a platform to further the implementation of climate change adaptation and that’s a win-win for everyone.”

How it all started

Dr. Ian Mauro, executive director of the PCC, was invited to Adaptation Canada 2020 to present on the Climate Atlas, which PCC developed to “inspire local, regional and national action that will let us us move from risk to resilience”.

Selkirk partnered with PCC when developing its adaptation strategy to help staff understand the specific impacts climate change has on the city and develop a strategy to deal with those impacts.

Mauro said the partnership with Selkirk clicked in a huge way and has been more successful than anyone could have imagined.

“The partnership with Selkirk has been so fruitful, so instructive and I think so inspiring for so many people,” Mauro said.

“And that’s because they’ve really demonstrated the pathway by which communities can take the local knowledge of their cities combined with science to create a functional plan that actually gets us into a place where we’ve got climate action taking place, not just the development of a plan that sits on a shelf.”

Mauro invited the city to participate in Adaptation 2020 because it’s a key component to spreading the word and helping others put their plans into action.

“It was really important to have the City of Selkirk there. When we had our workshop, people were huddled around and they were very seriously listening to Duane’s guidance around how you do this and potentially scale what Selkirk has done into other jurisdictions and so there’s a real opportunity for knowledge transfer from the Selkirk example,” Mauro said.

Doing the work now to make it easier for others

To facilitate that transfer of knowledge, PCC and the city are working on an academic case study that will help others reach their climate change adaptation goals.

“To extend the reach of this story and the lessons that it teaches us all we’re working in collaboration with the city to make a more complete case study of how this happened so that others can learn from the example and the things that we collaboratively generated and figured out together,” Mauro said.

“That’s what we desperately need is to see this replicated. Not only has Selkirk done the good work of getting themselves ready, they’re also helping other municipalities and cities understand how they can get ready. That extension work, that reaching out and not just working from within speaks to the strength of the City of Selkirk and the people there and the way in which that community is looking out for each other but also looking out for other communities. I think that’s the kind of generosity, good will and sharing of wisdom that we really need to deal with the challenge of climate change, but also any challenge.”