Selkirk’s water tower getting a facelift 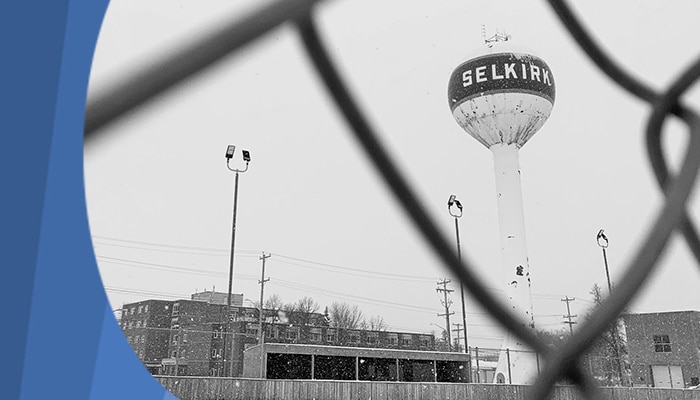 The City of Selkirk is borrowing a line from an iconic Canadian children’s show from the 1960s that implored viewers to ‘look up, look waaaaaay up,’ to see something special.

In the TV show, it was the Friendly Giant you’d gaze upon; in Selkirk it’s the city’s water tower.

Most know that if you take a look now you’ll see a tower that could use a little TLC and that’s exactly what the city is going to give it with a new coat of paint.

Mayor Larry Johannson said the water tower is as emblematic of Selkirk as catfish and the local steel mill and he’s excited about the upgrades.

“This is a project that’s been a long time coming and I’m really happy that the water tower is going to get a new look,” Johannson said.

“It needs a new paint job and we’ve been working behind the scenes to get this approved and now we’re going to work with an artist to use this canvas in the sky to help tell the story of our great city. It’s a unique project and one that I think the whole city will be enthusiastic about.”

Duane Nicol, the city’s Chief Administrative Officer, said the rate application the city submitted to the Public Utilities Board in 2017 included funds to pay for the expensive project. The rate application was approved in January 2019 and the city has put together a Request For Proposal (RFP).

“We began planning for this project in 2016, and in our rate application we identified 2020 as the year to do this work, subject to contractor availability,” Nicol said.

He called the appearance of the tower “less than pleasing” and wanted to ensure the public that’s all it is, the rust that is visible on the tower is not affecting the functionality of the tower, which pressurizes the city’s water distribution.

Protecting our water and the environment

The repainting of the water tower aligns with the city’s Strategic Plan by practising good environmental stewardship and maintaining a reliable water supply, revitalizing Selkirk’s image and capitalizing on the city’s tourism potential.

Dan McDermid, Director of Operations, said the tower is still doing its job but if the exterior was left unchecked it would eventually impact the performance.

“The paint acts as the skin of the water tower, it’s external and it’s keeping the elements away from the metal,” McDermid said.

A great piece for the portfolio

Two RFPs call for two contractors – the first one for a designer and a second will call for a painter.

Nicol said it’s an extraordinary project because the tower is more than 130 feet in the air. The designer will create the imagery and the painter will remove the old layers of paint and bring the design to life.

Ellie Longbottom, the city’s Culture Coordinator, worked on the designer RFP and studied proposals other cities had put together for similar projects. Selkirk’s proposal asks the artist to consider four concepts – the existing simple text look, a look using the cities new brand design, a mural reflective of Selkirk’s heritage, or a tasteful and community-aligned sponsorship.

“We should get some really good proposals and I’m looking forward to seeing all the submissions and how creative people will get with this,” Longbottom said.

“We’ve given them four concepts and I really want to see how different people interpret those themes.”

Taking inspiration from around country

Longbottom said she learned plenty from other municipalities from across the country that have undertaken similar projects, and she’s reaching out to the local arts community to encourage their involvement.

“It’s such a great opportunity to capture the essence of our city and to put it up there, high in the sky, for everyone to see. I can’t wait to see the ideas that are out there,” she said.