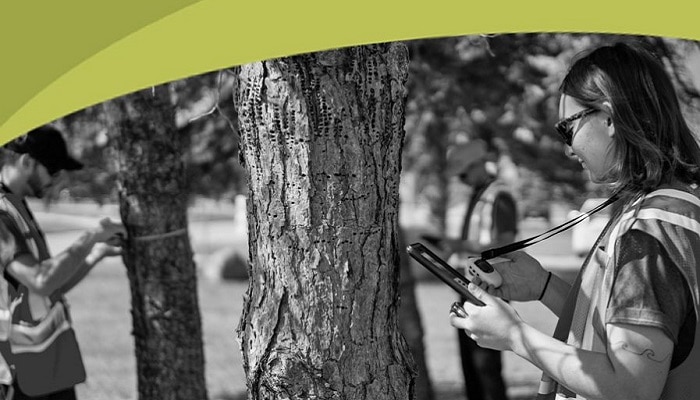 The leaves may be showing their fall colours now, but before they turned, a steady flow of rainfall put an emphasis on all things green, effectively turning up the colour volume on the city’s urban canopy.

It was a stunning visual reminder of their beauty and it came on the heals of the City of Selkirk’s completion of Phase 1 of a three-year tree inventory project that aims to ensure citizens will always have trees to admire and their multitude of other benefits will be reaped for years to come as well.

“Our tree inventory flows out of our corporate Strategic Plan and award winning Climate Change Adaptation Strategy – that’s why we’ve undertaken this project, and it’s aligned to our asset management program because trees are natural assets that deliver services and as a city we need to protect,” said Duane Nicol, Selkirk’s Chief Administrative Officer.

“With climate change and the risk of invasive species and stress on trees, the city is already at risk of losing a lot of trees, so we know we need to look at conservation of the species at risk and we need to better manage our urban canopy. Our tree inventory program will help us do that.”

The city began taking stock of everything it owns in 2015 under the Capital Asset Management Program and since then 6,600 assets – everything from pipes in the ground to trucks, streets and buildings – have been documented in an asset registry and mapped out.

The registry not only lists the city’s assets, it gives their condition and a plan for when that asset will need maintenance and when it ultimately will need to be replaced, allowing the city to prepare for its maintenance, repair and replacement.

This summer, Justin Torcia, the city’s certified arborist and tree inventory program leader, led a team of three surveyors who documented all the trees on Selkirk’s streets, back lanes and boulevards.

A new layer has been added to the asset management GIS map, with blue pin dots indicating each of the 4,700 trees the team collected data on.

“It’s a little bit overwhelming when you look at the map because there’s so many blue dots there,” Torcia said.

“But there are coordinates for each tree, and when you click on one you easily find out where it’s located, its age, what condition it’s in, how big it is around, how tall it is, all the pertinent information for that one tree.”

This year’s work demonstrated something the city already knew – there’s a definite lack of diversity in Selkirk’s tree population. Two species of trees make up almost half of the city’s street tree population – Manitoba Maple and Ash-Green, which account for just over 2,000 of the documented trees.

Diseases like Dutch Elm and Emerald Ash Borer are real threats. While the city has been proactive in managing its population to avoid devastation at the hands of these types of diseases, the detailed information provided by the inventory can enhance and strengthen those efforts.

“That’s the basis of asset management, by doing this inventory we’re understanding what we’ve got. Part of the process of asset management is not just having and buying new when they fail but improving operation and maintenance. It’s about sustainability of our infrastructure. It’s about maximizing life, minimizing costs and getting the best services we can from our assets,” Nicol said.

“So for a tree, for a natural asset, operation and maintenance includes taking those preventative steps and making sure that we’re managing it in a way that keeps the tree healthy and resilient. Trees that are healthy and resilient are much more likely to be able to survive some of the challenges that we know that climate change is going to bring to us and some of the other stressors that we’re going to experience in our city.”

Being proactive rather than reactive

Torcia said rather than just wait for Dutch Elm to devastate a tree, the city can apply a basil spray at the base of the tree in early fall to kill the beetle that spreads the disease. If there’s an infestation of aphids they can use another spray to eliminate most of the infestation and reduce stress on the tree.

“When a tree is stressed it’s more susceptible to diseases and pests. The less stress on our trees the better the overall urban forest,” Torcia said.

Trees are nice to look at, but they have value far beyond the visual – they clean the air by sequestering carbon, they give off fresh oxygen, they reduce storm water run off and provide shade that’s important to the lifespan of city streets.

“This is a very strategic effort, by planting trees today, in 15 or 20 years when these trees are actually providing the shade that we need them to provide they’re extending the life of the road and reducing the heat island effect within the city,” Nicol said.

“Managing and growing our urban forest is a vital part of our climate change adaptation efforts.”

The city is working on new policies that will govern the way trees are dealt with in the future, including a strategic plan for what type of trees the city will plant and where, as well as a policy to deal with damage done to trees during street construction, a fact that was noted during surveying.

Besides learning critical information about the city’s trees, Torcia said they also learned a lot about Selkirk residents.

“People were really supportive, they really appreciated the program once we explained how the information was going to be utilized,” he said.

“A lot of people out there really like their trees. When you have to go and cut down a tree in front of their home they get really upset, so they’re appreciative of the program and that the city is putting money and effort and resources into maintaining the urban forest.”

Next year, the tree inventory team will move into Selkirk’s parks.