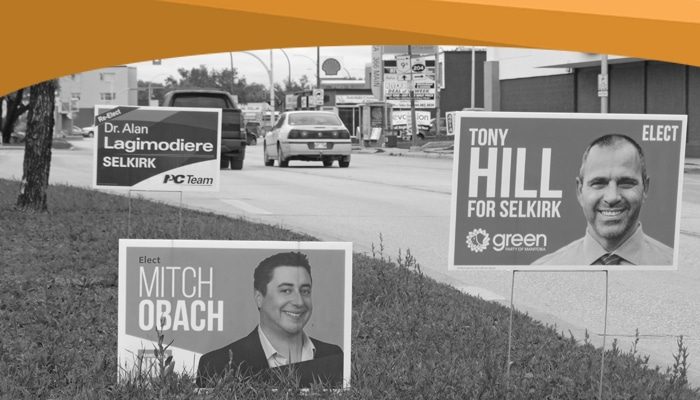 The electoral landscape is about to change in the City of Selkirk in a very obvious way – candidate signs will no longer be allowed to be placed on boulevards and left there for the duration of the campaign.

Selkirk Chief Administrative Officer Duane Nicol said previous councils looked at both by-laws and interpreted the 2000 Sign By-Law as not including election signs, as they were not specifically mentioned in the by-law.

The resolution of Aug. 26 changes that.

“The reason for the restriction is to limit the number of signs on boulevards which could be a distraction or interfere with safe driving,” Nicol said.

“There has been some concern, and confusion, over the years as to why business owners and private citizens have to remove their signs at the end of the day, whether it’s a sandwich board promoting a business or a garage sale sign, yet candidate signs can stay up for the duration of the campaign. Council’s decision is that once the provincial election is over, the new rules will take effect and candidates will have to follow the same rules.”

Selkirk council passed a resolution Aug. 26 directing the city’s By-law Enforcement to include election signs in the enforcement of the Sign By-law, created in 2000, which permits signs to be placed on public property from sunrise to sunset, but does not allow them to remain beyond that time.

The rules apply to all elections – including but not limited to municipal, provincial, federal and school board.

Election signs, or candidate signs, have been allowed to stay up longer under the (Traffic Control B-Law or Streets By-Law), written in 1974, which allowed for “political posters” to be installed on boulevards.

Keeping Things Fair for Everyone

Nicol said councillors and staff have been questioned over the years, and specifically when there’s an election, about why election signs are exempt.

Many of the complaints were simply that signs proliferating the boulevard were unappealing and quite an eyesore. It’s also a potential safety hazard.

“It’s aesthetically not very pleasing, it doesn’t make the community look very good so we get a lot of questions and concerns about that,” Nicol said.

“It’s also a safety issue. If there’s one or two signs in an area it’s fine, it’s not necessarily distracting, but when you have a whole mosaic of signs, it becomes a distraction to drivers.”

The goal of the Signs on Public Property By-law is to limit safety issues, limit traffic hazards and prevent excessive numbers of signs on public property. By definition within the By-law, signs on public property are broken down into “Sign” and “Business Sign”.   A “Sign”, which will now include election signs, is permitted on city property from sunrise and must be removed prior to sundown. The “Business Sign” must be removed at the close of business each day and is only permitted immediately in front of the building.