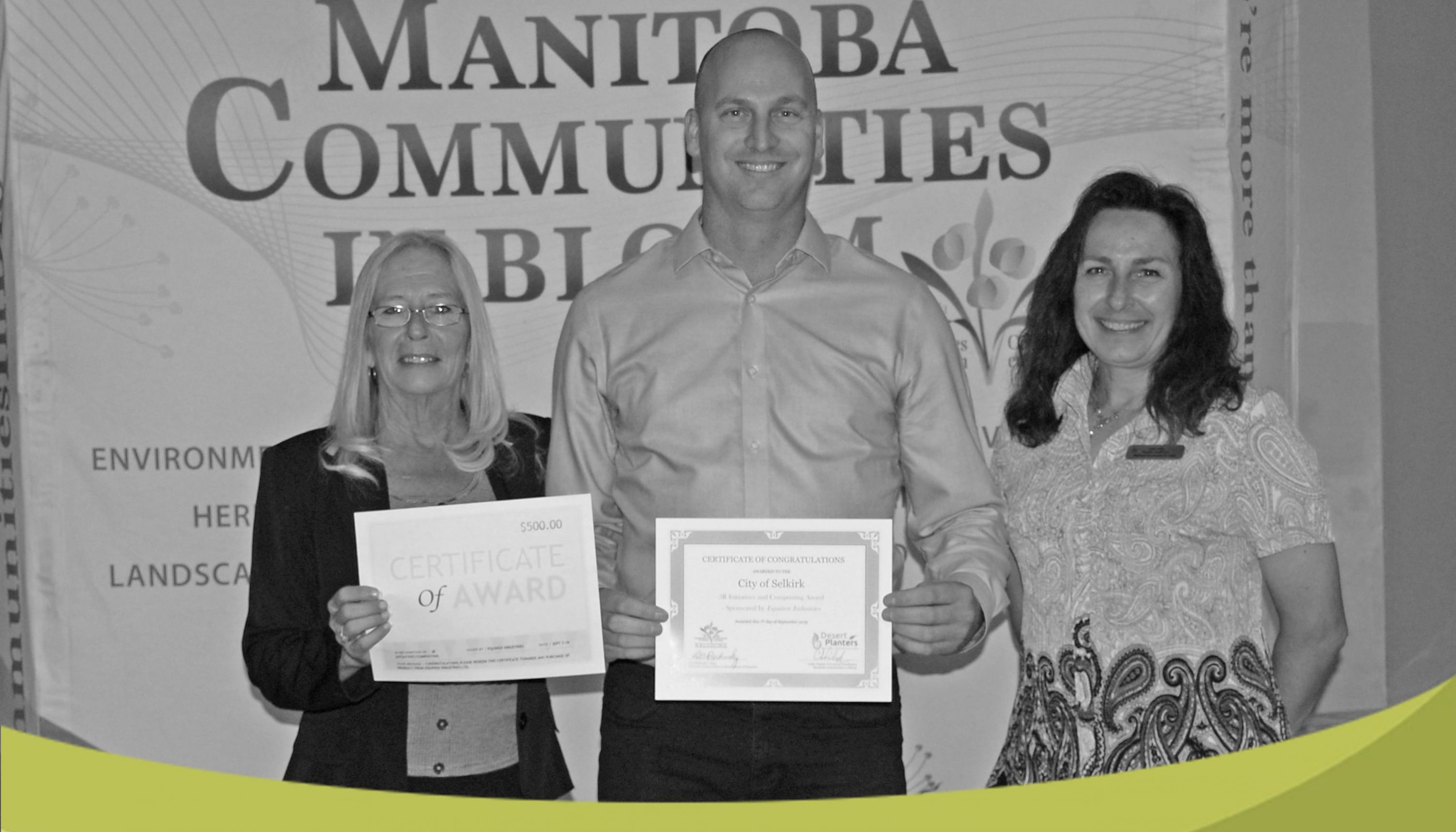 Selkirk’s Communities in Bloom (CiB) committee members credit teamwork for the 5 Bloom Bronze Award, with a Special Mention for its Water Tower Community Garden, it earned at the annual awards conference held Sept. 6 in Morden.

Committee member Michelle Balharry said the collaborative efforts of the City of Selkirk, sponsors Home Hardware, The Flower Child and The Selkirk Record, along with members of the Horticultural Society and volunteers worked together to improve the city’s score.

Newest CiB member Nia Massey was impressed with the weekend conference and awards, and called the entire experience a great opportunity for learning.

“As the newest member to the Communities in Bloom committee, this was my first year and I was really thrilled to be at my first conference,” Massey said.

“Our group managed to maintain its 5 Bloom Bronze rating. I’ve learned a lot about how the city operates and how the Communities in Bloom committee works. I’m proud to be part of it.”

Selkirk was also awarded the 3-R Initiatives and Composting Award, which goes to the community with the highest rating in the waste reduction to landfill section of the evaluation grid under Environmental Action. This section focuses on the 3-R’s: reduce, reuse and recycle in regards to municipal composting programs. This includes activities such as composting sites, yard waste collections, mulching of wood debris, reclamation of cut trees and handling of hazardous waste including e-waste collection and reuse of compost material.

The city’s representative on the CiB committee is Ryan Sicinski, Manager of Public Works, and he was pleased with the recognition for the city’s environmental efforts.

“Our new wastewater treatment plant, the solar panels on the Rec Complex and the composting bins placed at our civic buildings and community gardens played a huge role in achieving this award for us,” Sicinski said.

“I am so proud of our community for doing its part in contributing to this award as well.  As a new member to the Communities in Bloom team, I realized there is much more to this program than just flowers.”

The Water Tower Community Garden, along with Red Feather Farm, are Selkirk’s only multi-bin composting sites.

“The city partnered with us and built a multi-bin composting system for plot holders and residents to use,” said committee member Taylor Gyselinck.

“We see neighbouring residents walking over to use it and the gardeners use it. It’s huge to see that.”

Projects that stand out

The committee members – Anne-Marie Kurbis, Gyselinck, Debbie Kuypers, Sicinski, Balharry, Dianne Veitch and Massey – did many things this year, but two of the larger projects were the continuation of placing paving stones at the Main Street perennial garden and the revitalization of the Water Tower Community Gardens.

At the perennial garden, Grades 3 and 4 students from Daerwood School painted garden themes on some of the paving stones and will return this month to finish the project.

The Water Tower revitalization was not only the biggest project of the year, but the biggest the committee has ever tackled. Garden co-ordinator Taylor Gyselinck – also the owner of The Flower Child – said the return of the community gardens was embraced by everyone and the original plan for 28 raised plots quickly went by the wayside.

“We ended up increasing the number of plots due to the response from the citizens of Selkirk, to having 32 plots. At the end of the day we still had well over 20 people on our waiting list waiting for a plot,” Gyselinck said.

“The response was tremendous from the public.”

Not possible without generous sponsors

She said the city and Home Hardware were instrumental in allowing the garden project to flourish. The 28 gardens were left over from the original garden project that ceased operations a few years ago and 14 of the plots were in very bad shape.

“They had to tear them all apart because the wood was completely rotten,” Gyselinck said.

“They were really sad looking, they had quackgrass coming through and there were weed issues.”

The city not only built the new plots, they put poly on the wood so it won’t rot, placed a weed barrier and supplied top soil for the new plots and topped off the others.

Balharry said when CiB judges Shawna Phillips and Kelly Liebzeit toured Selkirk on July 24 they were impressed with the community gardens. Liebzeit was especially thrilled, having judged in the city previously.

“She was delighted to see the transformation of the community garden because she saw it in 2018 when it was empty and derelict,” Balharry said.

Showing what Selkirk has to offer

“It was fantastic for us to see the City of Selkirk leading the way in some of these categories, especially environmental action with all the work the city and council have done with things like solar panels on the Rec Complex, the new hospital, all of the forward thinking projects that have come to life in Selkirk,” Gyselinck said.

“They change not just the whole landscape, but it changes the whole idea, it really pushes us forward in a positive way and in a positive light. We’re really a leader for other communities throughout the province.”

The gardens were available to groups who wanted to take part and the Selkirk Nursery School, Jeanie Red Eagle and students from the Comp who created an Aboriginal healing garden and Camp Awesome were among those who dug in.

“Robert Smith School made a pizza plot which is one of our favourites,” Gyselinck said.

“They planted everything they need to make pizza, including the oregano, the tomatoes, the peppers and so in the fall they’re going to harvest it for the kids and have a great pizza party, so they can see the end of their hard work.”

The success of the gardens is evident in the fact that eight additional gardens were added and the committee still ended up with a waiting list of people who wanted to participate. But even more impressive is that the gardens have brought the community together.

“One of the greatest things was seeing the community come together there,” Gyselinck said.

“I can go there at 8 o’clock any night of the week and there’s people gathering there, there’s such a social aspect.”

The committee once again held a Yard of the Week contest and a Commercial Property of the Week, which was a big hit. They’re going to build on the enthusiasm with a Holiday Lights of the Winter contest.

The city’s new off-leash dog park was a highlight of the judges’ tour as well.

“It’s basically driving home again that Communities in Bloom is so much more than floral displays, and it’s so much more than being in bloom, there’s more involved and so much community effort that has to be recognized throughout all of the criteria across the board to achieve the ranking that we do,” Gyselinck said.

“I personally feel privileged to be part of Selkirk’s Community in Bloom committee and to sit at the table and represent our community, especially when you go to the conference and see how difficult it is to achieve those five blooms.”

City of Selkirk 45 mins ago

City of Selkirk 49 mins ago