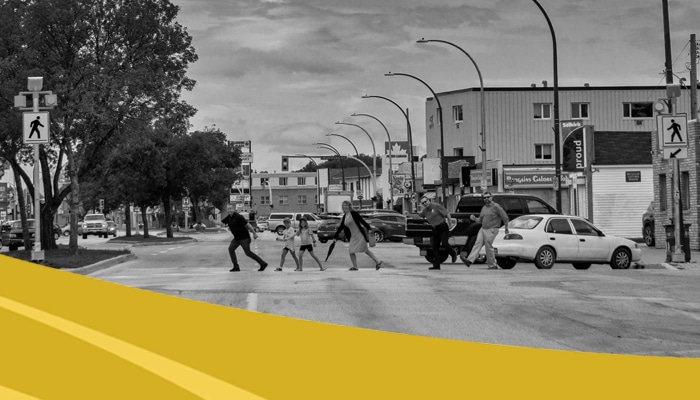 The city has installed solar powered crosswalks at Main Street and Morris Avenue, an environmental and cost saving move that will also increase safety for students walking to school and anyone participating in active transportation.

“It’s a high traffic area for a lot of students so it’s a great spot for a crosswalk,” said Ryan Sicinski, the city’s Manager of Public Works.

“We’ve also addressed the safety concerns that are on Manitoba and Jemima with fresh solar crosswalks there as well.”

Along with the new solar crosswalks, Manitoba Avenue and Jemima Street have improved signage that is better placed to alert motorists to the cross walk.

“There were some issues with the Manitoba and Jemima crosswalk last year,” said Dan McDermid, Director of Operations.

“It’s a very wide stretch and sometimes drivers weren’t realizing there was a crosswalk there. This new crosswalk is more visual and will alert drivers better.”

Shining a light on active transportation

Selkirk Mayor Larry Johannson said installation of improved crosswalks is an important part of the strategic plan and a demonstration of the city’s commitment to enhancing opportunities for safe active transportation.

The city budgeted for two new solar installs this year and is fulfilling Strategic Plan commitments to make Selkirk a vibrant, safe and healthy community, build safe and sustainable infrastructure and be good environmental stewards.

A great financial and environmental decision

Going with solar power is an obvious environmental benefit but also a wise financial decision. The crosswalk at Main and Morris, as well as one installed at Manitoba Avenue and Annie Street last year, doesn’t have electric power available.

“These locations currently don’t have power to them, so both were prime candidates for solar because to run electrical power, plus meters, plus everything else would be very costly,” Sicinski said.

“So solar is a perfect solution.”

An added benefit of solar is that every part of the solar crosswalk is replaceable, so if there is a part that stops working, it can easily be replaced by city staff rather than having to call Manitoba Infrastructure out for repairs.