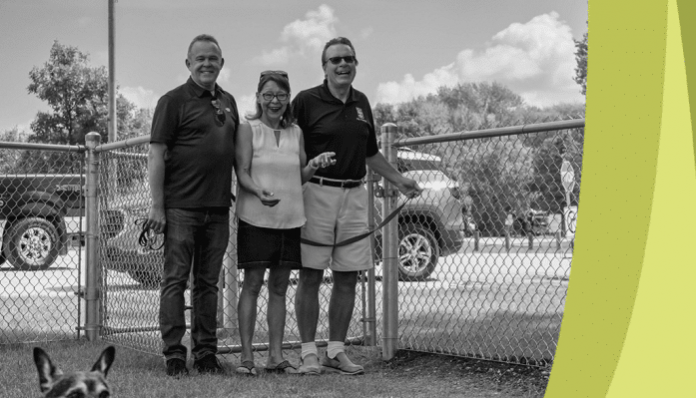 SELKIRK, JULY 16 – With a bark and a howl and several sniffs hello, Selkirk’s four-legged citizens were off and running at the official unleashing of the city’s first fenced off-leash dog park today.

Mayor Larry Johannson said the opening of the off-leash park, located within Selkirk Park across the road from the campground office, set tongues a’wagging and brought smiles to the faces of both dogs and their owners.

“It was fantastic to see everyone come out today for the unleashing and it was great to see all the dogs having fun and getting some exercise in a safe environment,” Johannson said.

“This project was something council supported and worked on with administration to make it happen and we know it was something citizens wanted very much. Citizen engagement into the development of this off-leash park was tremendous and I want to thank everyone for their effort and involvement.”

A safe space for your dog to play

The dog park features two double gate entries, allowing the dog owner to open the first gate and close it behind, so owner and dog can stand in a waiting area while the other dogs approach and sniff out the new arrival. Once everyone is acquainted, the owner can safely open the second gate to enter the dog park. The double gates reduce the risk of dogs getting out of the park when a new one arrives.

The park is 1.75 acres and has a four-foot high chain-link fence. There are trees and small hills within the park and bags are available for owners to pick up dog waste and dispose of it in the garbage cans.

Rules are posted in the dog park and public washrooms are nearby in Selkirk Park.

The city’s Strategic Plan calls for public engagement as well as development of outdoor spaces and providing the best recreational opportunities. The city encourages active transportation and the dog park is accessible from the road and will be accessible from the walking trail in Selkirk Park.

Ruth Rolfe, the city’s Manager of Parks and Recreation Facilities, says the city looked at several locations for the off-leash park and this site was the best due to its topography and easy access for both foot and road travel.

The City of Selkirk identified the establishment of a dog park as a priority in its 2016 Recreation Strategy and allocated funds to complete the project within three years.

In 2018 a survey on the dog park elicited tremendous response, resulting in more sign ups for CitizenVoice, the city’s survey program, than any other survey.  A Facebook page has already been started by a private citizen and people are sharing information on the dog park.

Selkirk’s hydration station was on site for the unleashing, making sure people and their dogs were well hydrated and there were doggie treats for the day’s most special guests as well.

Rolfe said the city will continue to work with citizens to improve the off-leash park, which in future could be connected to water and electrical lines to offer water at the park and lighting for night time use.

If you’d like to join a citizen group to be a part of the management and future development of the park, contact the CRGT clerk at 785-4950.