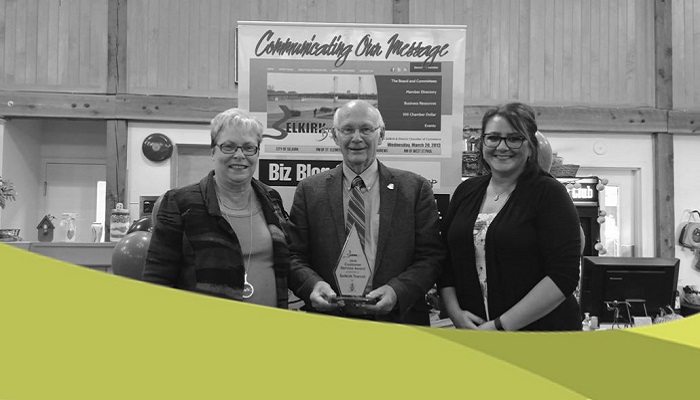 You may think Selkirk Transit is just a bus service and you probably don’t give much thought to the deeper purpose behind it.

It’s understandable, but the good news for the people of Selkirk is that there is a deeper purpose to Selkirk Transit Authority and it benefits people from almost every segment of society.

The Selkirk Transit Authority (STA) has a mandate to engage the community and it’s something everyone on staff takes to heart. It hasn’t gone unnoticed and the STA recently was recognized with the Selkirk Biz Customer Service Award.

More than a transit service

For Charlene Dunning, Manager of Transportation Services for Selkirk Transit Authority, which operates Selkirk Transit and Selkirk Mobility, the award is verification that STA staff’s efforts to do more than just provide a ride are working.

“We’re always thinking of ways that we can do good in the community and we know that providing affordable and environmental transportation is the start of that, but the goal is to do more, to find ways that as a non-profit we can improve the lives of people,” Dunning said.

“To do that, we’re always looking for innovative ways to serve our clients better, and to help citizens get around the city, and beyond, allowing them to connect with others, which improves their lives too.”

Partnering with community groups enables STA to reduce fees, or in some cases eliminate them, so people can get around the city, or to places like Winnipeg, safely.

The STA partners with the Children’s Festival to provide free transportation to several day cares; offers a free park and ride to Holiday Alley; partners with local businesses like Boston Pizza for Game Day transportation to Winnipeg Blue Bomber and Winnipeg Jets games and Fabutan and Frank’s Pizza to reduce the price of monthly youth bus passes by more than half. Frank’s Pizza has also created Frank’s Fund, which reduces the cost of youth charters so groups like day cares can travel to local landmarks for field trips.

Selkirk Mobility has been recognized on several occasions for the way its staff go the extra mile to ensure clients are respected and cared for. Mobility recently celebrated its third anniversary and as it fell on the 100th birthday of client Dr. Claude Murphy, who’d been with them since the beginning, they included him and his family in the celebration.

It was Terrie Moar, executive director, and Shawna Cromie, team lead, of Growing Years Family Resource Centre, who nominated the STA for the award, citing its role in the Mastermind Group as a big reason for the nomination.

Mastermind features representatives from various not-for-profit groups who meet to learn more about each other and find ways to problem solve issues they may have. In their nomination letter, Moar and Cromie say it became clear that STA was doing more than picking up and dropping off clients.

“It was (in Mastermind) that we first became aware of Selkirk Transit’s philosophy around providing outstanding quality of service. They have played a key role in helping Selkirk become connected, providing a key service to allow our citizens to support local organizations and businesses,” the nomination said.

“We are amazed at how they seek partnerships. They have been a boon to Growing Years Family Resource Centre, offering to assist the accessibility of ridership for families in need. They offer a variety of services to Selkirk and area, assisting seniors, families and people with disabilities to connect with family, medical services and businesses. They are open to suggestions and are mindful of the needs of their ridership. This is key to their success.”

Dunning said Mastermind opened her eyes to an opportunity that aligned perfectly with the STA’s mandate to engage the community, and the STA along with some community partners, put the wheels in motion.

“While attending the Mastermind meeting, I heard about so many great programs but there was a common barrier for all – transportation,” Dunning said.

“So working with several community partners we were able to secure funding for a pilot project.

They applied for and received a grant from the Selkirk Community Renewal Corporation that allowed them to move forward with a pilot project that aimed to increase community engagement by removing cost barriers to transportation.

The program is in its infancy but has so far shown great promise. During the month of October, their ridership increased to 3,451 riders, up from 2,342 riders during the same month last year. That’s an increase of 1,109 riders in one month alone.

“The pilot program has been a huge success,” Dunning said.

The STA works with several mental health organizations and removing the cost barriers to transportation is allowing their clients to become part of the community again.

“It’s an exciting program and has brought a network of community leaders together. We’re learning from each other and supporting each other,” Dunning said.