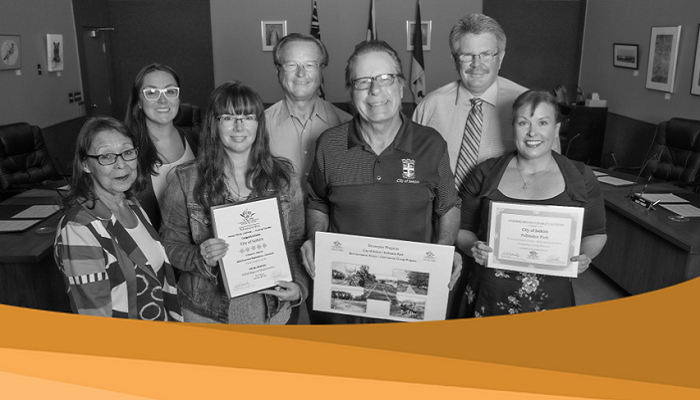 There’s a unanimous feeling amongst those involved in Communities in Bloom (CiB) in Selkirk that it takes a village to successfully bloom.

That thought is shared by the CiB judges, who commended everyone from the CiB committee, mayor, council and CAO, city staff, Selkirk Horticultural Society, business owners, home owners, volunteers, a Transit driver and the Selkirk Regional Health Centre in their evaluation that earned the city a 5 Bloom Bronze rating.

The judges were impressed with the immense amount of pride shown by everyone, and especially how the city has taken CiB to heart.

“The City of Selkirk’s vision ‘A vibrant regional hub for commerce, culture and recreation, providing the best opportunities an urban center can offer,’ was experienced throughout the well-planned and executed Manitoba Communities in Bloom judges tour,” the evaluation says.

“It was gratifying to hear CAO Duane Nicol acknowledge that the Communities in Bloom 6 criteria and basic values were the basis of the city’s informative breakfast meeting presentation.”

The city’s rating means it achieved a score of 84 per cent, which falls into the Bronze scoring level of between 84 – 86.9 per cent.

Committee member Michelle Balharry said Selkirk was one of just three communities to score 5 Blooms Bronze out of 14 entered, and the only one in the over 5,000 population category to do so.

“That’s a tremendous accomplishment to receive scores like that in our population category because it’s very difficult to receive that high of a ranking,” Balharry said.

Though Balharry joined CiB two years ago, she knows that previous members have worked extremely hard since Selkirk first joined CiB and scored a 3 Bloom rating. That effort continues and starts every year almost immediately after the judges’ report is released.

“How we get better is we take the judges’ recommendations into serious consideration, we listen to what they have to say, we look at the scores to see where we can improve and that’s where we concentrate our efforts,” Balharry said.

Ruth Rolfe, the city’s Manager of Parks and Recreation Facilities, said the judges’ recommendations also help inform council of what it can do to continue the city’s forward progress. Rolfe said she can bring up the recommendations during budget discussions and council is receptive.

Rolfe, who was in her first year working with the committee, said communication is key for success and the committee and the city provide very clear direction, which makes her responsibilities easier to achieve.

“It’s a really easy relationship. When you sit down with the committee there’s an enthusiastic group of volunteers that clearly knows what they want, so when I’m asked to do things, it’s clear,” Rolfe said.

“And it’s the same with mayor and council, there’s clear direction from them, so it really helps administration.”

The city joined CiB nine years ago, and Chris Carruthers, Director of Culture, Recreation and Green Transportation, has been involved since Day 1. He’s seen an evolution in the city in attitude and it’s reflected in the ratings, which have increased every single year.

“The city and community, the business community, all the volunteers…It’s now established in the community and it’s just gonna get better and better.

“Sometimes we only go up one per cent, but we’ve never taken a step back or even rested on our laurels, we’ve always moved ahead with a better score every year.”

Balharry said city support is crucial to the committee’s success and it’s nice to see that the city is all in.

“I’ve never seen it in any other community. It’s such a good partnership,” she said.

Debbie Kuypers, who’s been a CiB committee member for seven years, agreed that city support is crucial. But so too is a strong committee and she said they’ve had great members all along.

She said Anne-Marie Kurbis, who’s been on board since Day 1, is “the backbone” and new people who’ve joined in recent years have all brought something to the table.

“I think what Anne and I are both happy about in the change of the committee is there’s more enthusiasm – energy and enthusiasm. We needed a change, like any committee, you need to bring people on board with different talents and qualifications and fresh perspectives,” Kuypers said.

“Everybody has their own little specialty, I think we feel really energized with the new people that came on board.”

Along with Kurbis, Kuypers and Balharry, committees members include Taylor Gyselinck, Corinna Rach and Dianne Veitch. Rolfe and Carruthers are the city representatives.

She said there’s a degree of community pride that has been fostered throughout the years and it’s evident in people’s behaviour. One member of the Horticultural Society randomly picks weeds in the parks while out on her lunch break.

And while everything might be coming up roses for the committee, Kuypers said there’s still work to be done in making people realize that CiB is about more than just flowers.

“When people talk about it they think it’s planting flowers, and while that’s a good thing that makes the city look great, there’s so many other aspects of Communities in Bloom. We can’t emphasize that enough,” she said.

The judges gave special mention to the Selkirk Regional Health Centre. They toured the hospital and its grounds and were impressed with how the hospital meets or exceeds the CiB criteria – which are tidiness, environmental action, heritage conservation, urban forestry, landscape and floral displays.

“The Selkirk Regional Health Center was chosen as the ‘Special Mention’ as this facility and grounds meets or exceeds all 6 evaluation criteria. Tour guide Pamela McCallum, Executive Director Interlake Eastern Health Foundation, emphasized the relationship this facility plays in connection with patients, staff, the environment, nature, sustainability and the community. Aspects that are in line with Communities in Bloom and City of Selkirk values,” the evaluation said.

Balharry also commended everyone who participated in Yard of the Week and Commercial Property of the Week.

Rach developed the Pollinator Park and was recognized with an award for a photo essay she did on the project.

This year’s main project was creating a path at the Main Street Perennial Garden and Balharry said Home Hardware was a big supporter and donated patio stones. It’s a project that will continue to benefit the community in years to come.

“The future project for that is to have school kids come and paint garden themes on the patio stones, so it’ll be an ongoing project that involves community and teaching about what’s at the garden and why it’s important.”