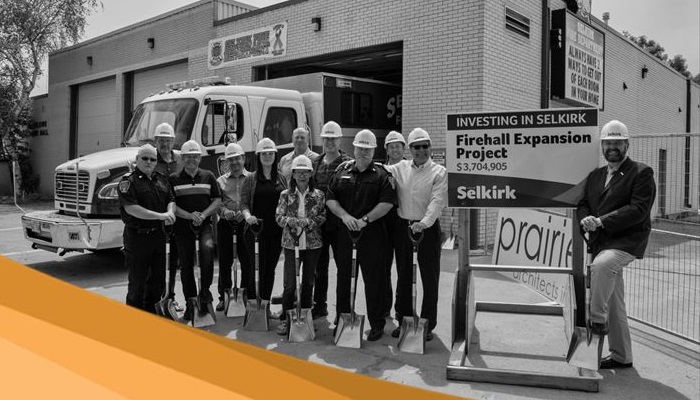 The City of Selkirk held an official ground breaking ceremony June 12 to signal the start of construction on its fire hall expansion.

The $3.9 million expansion includes a three-storey building that will be attached to the west side of the current fire hall on Eaton Avenue. The new building will include a truck bay for a much needed ladder truck and improve the function and update the existing building with the addition of showers, lockers and changing rooms. It will also include a year-round, indoor training suite, a training room, administrative offices and will be the new home to the city’s Emergency Operations Centre (EOC).

Selkirk Mayor Larry Johannson said the expansion was fuelled by a need to provide a state-of-the-art facility to house the city’s top-notch fire department and the equipment they use to protect the city’s people and property. The city’s growth has made the ladder truck a necessity.

Johannson said because the current hall can’t accommodate a ladder truck, which the city expects to purchase in 2019, the expansion is a priority.

“I’m really proud of our fire department. They’re recognized for their professionalism by their peers and respected by the citizens for the important work of not only saving structures but people’s lives,” Johannson said.

“It’s an exciting time in Selkirk. This expansion will improve conditions for the firefighters and provide better protection for the citizens of Selkirk. It’s been years in the making, and I have to acknowledge the members of the Fire Hall Taskforce, who took the time and the effort to do this right.”

“We took an integrated planning approach to the designing of this expansion,” Cook said.

“We brought in Prairie Architects who then brought in the engineers, mechanical systems experts and so on. The City brought key administration that will be responsible for the operation and maintenance of the building after it’s built, and most importantly we brought in the fire fighters who will actually use the building. Everyone was at the table at the same time making sure this building meets the needs of the fire department and is cost-effective and environmentally responsible over the full-life of the building.

Improvements to better protect our residents and fighters

Selkirk Fire Chief Craig Fiebelkorn said the addition will greatly improve the hall, and stressed the purchase of a ladder truck is crucial for firefighters to do their jobs.

“The catalyst behind this whole thing is the need for a ladder truck to protect the City of Selkirk. With all the new somewhat high-rise apartments coming up, all the retail spaces coming up, you need that elevated waterway for fire suppression and rescue,” Fiebelkorn said.

“Currently, we have no room to put a ladder truck inside. The expansion out the west end of the existing building will house the truck and it will give us an interior training suite that we can use for mock rescues, as well as office space and a training room.”

The fire hall expansion meets several criteria in the city’s Strategic Plan, which makes safe and sustainable infrastructure a priority, as well as getting maximum value from community resources. The hall expansion is an example of the city actively managing its capital assets. The city also engaged its citizens in the fire hall design process, holding an open house in January of this year, another priority of the Strategic Plan.

The groundbreaking ceremony was held at the current fire hall, located at 200 Eaton Ave., beside the civic offices.