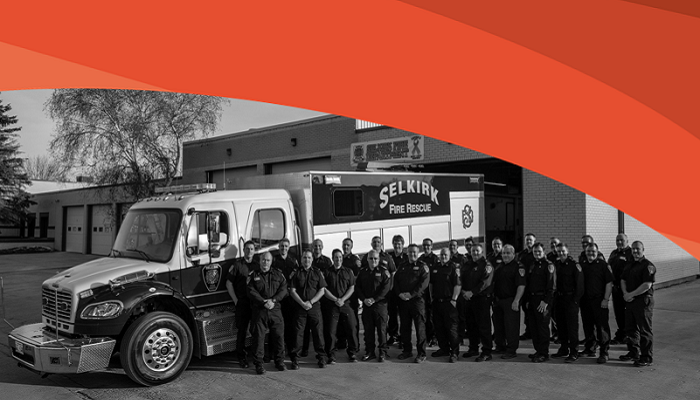 The city’s replacement of a 25-year-old rescue truck and the advancement of technology have combined to make Selkirk’s firefighters better equipped to do their job fighting fires and keeping Selkirk’s citizens safe.

The Fort Garry Fire Trucks, custom-built rescue vehicle was designed by members of the Selkirk Fire Department, in consultation with city, to meet current needs and to be able to handle population growth that is occurring in Selkirk.

“The truck was built with longevity of service in mind and functionality,” Selkirk Fire Chief Craig Fiebelkorn said.

“Basically a rescue truck is a big tool box. It carries our fire- fighting gear, our breathing apparatus that we wear for fires, our saws, our extrication tools, and all the heavy equipment you need for the peripheral of firefighting and rescues as well.”

Investing in our future

Selkirk Mayor Larry Johannson said investing in the city’s citizens and their safety is not just a Strategic Plan priority, but a priority for Council and Administration and the new rescue truck offers peace of mind that Selkirk firefighters have the tools they need to do their job well.

“We’re proud that we’re getting this new truck and we’re proud of the expansion of the fire hall. Protective services in the city is of the utmost importance to all of us, it’s always high on our priority list and I think with the arrival of the new truck it shows that we mean business when it comes to protection for the City of Selkirk,” Johannson said.

“This truck will be an asset and is a much-needed addition to our fleet. I think we have the best volunteer fire department in Canada and we are making sure that we outfit them with the best equipment to do the job.”

Fiebelkorn said the truck will improve the safety factor at fires immensely. A light tower atop the truck can illuminate half a city block so that nighttime firefighting becomes safer and more efficient. The light eliminates the need for portable generators and lights, all of which take time to set up.

“The light really adds to the safety features of the truck. In the middle of the night, you want people to see, and not be tripping over snow banks and extension cords. That’s handy to have and time saving too,” Fiebelkorn said.

The truck was also built ergonomically. All the trays slide out, tilt and lock in place and there are dividers that equipment can be fastened to so it can’t slide around and cause damage.

“It was built with the firefighter in mind.”

The rescue truck will be the command centre at fires and other emergencies. It has an upgraded communications system for fire ground efficiency and multi agency inter-operability. The truck is also equipped with a green strobe light, which is the international indicator of incident command, so during mutual aid calls arriving detachments will immediately know where to report to.

“People coming will know to come to that truck and we can strategize with other Fire Chiefs,” Fiebelkorn said.

“The safety features are unbelievable and we’re looking forward to operating more efficiently and safer at all times.”

David Thorne, Director of Protective Services for Selkirk, said the $419,000 truck was funded through a reserve fund and won’t result in a tax increase for residents.

“The city’s been contributing to the reserve for many years knowing that this asset would have to be updated, so there’s going to be no hit to the citizens. This is one of the benefits of good capital asset management,” Thorne said.

The previous truck was built long before true rescue trucks were designed and Thorne said after decades in service, it was time for an upgrade.

“The truck that it replaced was built in 1996, had served its purpose and was in need of replacement. The city has done its due diligence with its strong asset management system and moving in this new rescue truck in place of the old one is seamless.” Said Thorne.