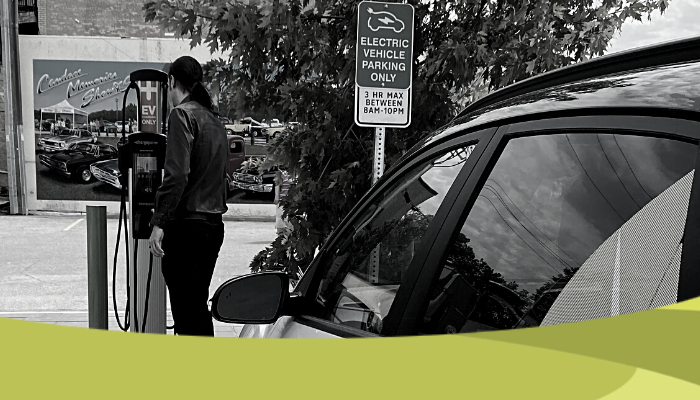 CAO Duane Nicol said there is an ever-increasing number of electric vehicles on the road and the charging station provides convenience for residents, and visitors to the city, who have chosen to drive an EV. Plus, it supports the city’s work towards reducing its Greenhouse Gas emissions.

“With the Federal Government mandating that all new vehicles sold in Canada will be electric by 2035, we know there will be a massive increase in electric vehicles on the road, in fact we’re seeing it already. Charging stations are vital to this shift. In the coming years, having this infrastructure in your community will be the only way to keep visitors and tourists coming,” Nicol said.

Dan McDermid, the city’s Director of Operations, said electric vehicle charging stations come in three levels, from 1 to 3. The city’s level 2 charging station is best for daily charging and charges 10 times faster than a level 1. A level 2 station can charge a fully depleted battery within 4 to 8 hours depending on the vehicle. Level 2 stations are also great for “top-up” charging, that is adding some additional charge to a partially depleted battery. A level 3 charging station requires 400-volt service, which is very expensive to install.

“The city itself currently has two hybrid and two fully electric vehicles, and due to the fact that more and more people are making the choice to switch to an electric vehicle it made sense to install the charging station,” McDermid said.

“We’re thankful for the ZEVIP grant that allowed us to do this, and we’ve applied for another. If successful, we may install two additional EV charging units at two other locations in the city.”

The location of the city’s first charging station was strategic Nicol said, ensuring maximum benefit for the local community.

“It’s perfectly located. Users will pull up and plug in. While their vehicle charges, people will have time to get out and walk around our downtown, do a bit of shopping and dining,” he said.

For Spencer Hruden, the city’s Energy Efficiency Coordinator, the public charging station in Selkirk is a welcome addition for those who already own, or are considering, an EV or a hybrid. Gas stations are everywhere, but charging stations aren’t, at least not yet.

“A common issue for people considering the change to an electric vehicle is range anxiety, which is the concern that charging stations will not be available where and when they are needed.” Hruden said.

Nicol said that while the city is adding this infrastructure, there will be a role for the private sector in the future as well.

“While there have been some investments made by private businesses like Canadian Tire in Selkirk’s west end, it’s not nearly been enough. Gas stations are owned and operated by businesses – in the long run, so will charging stations. At this point public sector investments are needed to address the current gap – but that will only go so far. The private sector needs to play a role here as well.”

The city has taken a leading role in environmental sustainability, and climate change emergencies occurring across the globe demonstrate the need for action.

“Climate change is the most pressing issue of our time. We are once again seeing the results of a changing climate, and the devastation it is causing, on our TV newscasts every night,” Nicol said.

“From unheard of 40-degree-plus temperatures in the U.K., to out-of-control wildfires in Canada, the United States, Greece, Portugal and many other places, we’re seeing what a warming climate does.”

The EV charging stations align with Selkirk’s Strategic Plan which makes environmental stewardship a priority and calls on the city to improve its practices and services and help citizens make good choices.

Selkirk has led the way in environmental stewardship, from its state-of-the-art and centre of excellence Wastewater Treatment Plant to its award-winning asset management plan that integrates climate change into the city’s infrastructure decisions.

Last fall, Selkirk enacted its innovative Greenhouse Gas Accountability Bylaw and began reporting its emissions – which the city had been tracking since 2016 – to the Carbon Disclosure Project.

Nicol said the city is reducing its corporate emissions, and several initiatives are underway to achieve its corporate target of net-zero emissions by 2030. Specifically, Nicol notes that the city’s Wastewater Treatment Plant is fossil fuel free, and half the water treatment plant has been geo-thermal retrofitted with the remainder set for retrofitting this year. Decarbonizing both facilities would account for about 31 per cent of the city’s total emissions. The city is decarbonizing its vehicle fleet by replacing gas vehicles with electric and hybrids, which would further reduce emissions by about 45 per cent.

“Adding EV charging stations in strategic locations throughout the city, is aligned with our strategic vision and is another demonstration of our commitment to climate action. It is our contribution to expanding the charging network and making it easier for citizens of our region and beyond to electrify their transportation,” Nicol said.