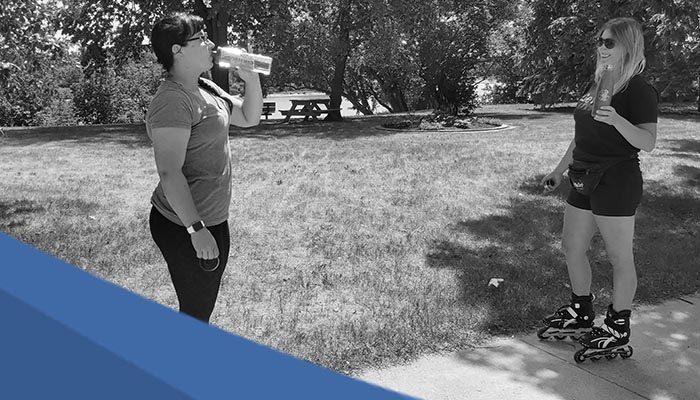 The cumulative effect of drought-like conditions year after year in Southern Manitoba is taking its toll in several ways, and one of them is playing out in the kitchens and bathrooms of several communities across the province.

While other communities – Winkler, Morden and Niverville among them – have had to enforce watering restrictions to preserve a limited supply of water, the City of Selkirk has no such issues. The City of Morden has a tip line where residents can report neighbours that aren’t adhering to water restrictions that were implemented on May 4.

In Winkler and Niverville, watering your garden or your flowers is only permitted on even days for one half of the community and odd days for the other.

While Selkirk encourages water conservation as a good environmental practice, there are no restrictions in place.

Selkirk has no need to enforce watering restrictions, thanks to forward thinking, demand management and asset management strategies that have the city prepared with a stable supply of water for today and tomorrow.

The city’s Strategic Plan, Priority 3 – Safe and Sustainable Infrastructure, calls for the city to have a reliable water source.

The forward thinking began in 2011 when the city expanded its water treatment plant. In 2016 Selkirk partnered with the Manitoba Water Services Board (MWSB) on an investment of $2.5 million and drilled two supplemental wells in the RM of St. Andrews to complement the four wells in Selkirk that were already serving the city. An 11 km pipeline was built – Selkirk’s version of the Winnipeg –Shoal Lake aqueduct – and carries the water to Selkirk.

The result has been safe and abundant water for Selkirk residents now and into the future.

“We’ve got a big check mark beside the Strat Plan’s call for a reliable water system, and we have the data to prove it,” says CAO Duane Nicol.

“When we embarked on the supplemental wells project in 2016, we pledged that we would be proper stewards of the environment and responsible users of the water supply. We said that we’d work with our neighbours to make sure there’s enough water and that it’s safe and abundant. And we’re doing that. While this is important for today, it is absolutely critical to ensuring our city’s future in the face of climate change. This is about being prepared for growth and at the same time, creating community resiliency to climate chaos.”

Mayor Larry Johannson says that Selkirk has invested millions of dollars in the critical, though not always headline-grabbing, municipal infrastructure

“And residents, who’ve invested their life savings in their homes, they should feel confident that the infrastructure is here to support them. The value of their homes isn’t going to be sideswiped by a failing water system or failing wastewater system.”

The city’s Environmental Act License for the additional wells and pipeline calls for the city to provide a monitoring report to the province every five years. The city upped that and has a contractor monitor the wells every year.

Raven Sharma, Utilities Manager for the city, says the city was extremely proactive in its water monitoring and is almost unique in its approach to its water supply.

“Beyond the yearly monitoring, internally, the City of Selkirk staff go to every city well every week and we actually mark the static water level and I put it into a trend graph so we’re monitoring all the time,” Sharma said.

“We can pick the graph up and look at it over a month-long period and if we see a decline in the static water level, that indicates something with our draw down and we can investigate and look at our hydrology.”

Sharma says yearly monitoring is rare in other communities, and weekly is unheard of.

Nicol said a report from Friesen Drillers, the company contracted to monitor the wells every year, for the years 2018-2020 shows the city’s wells are operating as expected and that even with a lack of precipitation over the last couple of years the wells have normalized and the city has more than enough water supply to meet its needs.

The monitoring also includes precipitation tracking and the relationship between precipitation and the aquifer, which is another component that helps the city anticipate what the future will look like as the climate changes.

All of the monitoring helps inform the city of trends that could indicate a potential problem so the city can be proactive instead of reactive.

“That’s a big part of this. The city’s climate change adaptation strategy is knowing that we don’t know everything right now. The strategy directs the city to build practices and systems that collect good data and analytics so that we are in a situation where we can actually anticipate rather than react. We can get a head of problems,” Nicol said.