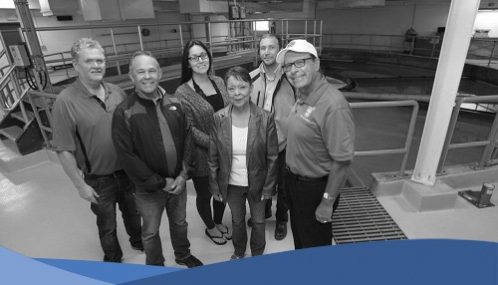 Installation of a pipeline that will secure a safe and consistent water source for Selkirk residents today and for years to come is underway and will be completed by September.

City of Selkirk Director of Operations Dan McDermid said residents currently get their water from four wells located within the city limits. The city’s main well is located on Christie Avenue. A $1.9 million construction project saw two additional wells established in the RM of St. Andrews and an 11 km pipeline is being installed to bring the new supplemental water source to Selkirk’s water treatment plant.

The total cost of the project is $2.5 million, which will be cost shared 50/50 between the City of Selkirk and the Manitoba Water Services Board.

Concerns about adequate water supply for the city were initially raised decades ago, in the 1960s, and though reports from that time called for additional wells, no work was done.

Selkirk Chief Administrative Officer Duane Nicol said that a dry summer several years ago presented some challenges with the city’s water supply and prompted both water conservation efforts and a renewed look at the ability of the existing wells to supply Selkirk and its growing population.

Nicol said Selkirk is built atop a unique limestone formation and studies have shown the rate that water from the aquifer can be drawn through the limestone is quite low, about 5,000 gallons per metre per year. It’s a rate that’s far too low to supply Selkirk today and into the future.

“We were using far more than that,” Nicol said.

“We were getting to the point where, within a very short period of time into the future, there was a good possibility that we were going to dewater our well, or in other words, drop the water line below the well head.”

The search for a suitable location for new wells began in conjunction with the Manitoba Water Services Board, the St. Andrews location was tested, the community and municipal council were included in consultations and ultimately the site was selected.

McDermid said the investigation was extremely thorough. The city and MWSB looked at existing studies and conducted new ones. Friesen Drillers was retained and test wells were dug, test pumps where the site was tested at full capacity for seven days to see what effect it had on surrounding areas were done and the site passed all the stringent testing.

Nicol said the extreme pre-testing was important to ensure the new well wouldn’t cause problems for anyone, especially those who live near the site.

“Basically what you’re trying to do with the pre-testing is determine if you’re going to cause a problem, then let’s cause it now before it’s actually in production. What the testing did tell us is that even at full capacity, which the wells are not going to be at full capacity when we’re using them, did not have a material impact on anyone. It dropped the water line slightly in the wells within the first mile, after that there was no change at all. When they shut the wells off, they recharged within 24 hours,” Nicol said.

“There’s just an amazing amount of water available in that area. We’re going to have zero impact on the residents and that’s a very important part of the licensing process. We have a policy in place now that says if we ever do have an impact in the future, because of our well, we have a commitment to restoring existing water users’ ability to get water.”

The rate water can be drawn through the limestone at the new well site is 100,000 gallons per metre per year.

Planning for our future

The water line fits with the priorities in Selkirk’s Strategic Plan in several ways, including taking a firmer control of our economic destiny, providing safe and sustainable infrastructure including a reliable water supply and being good environmental stewards through water conservation.

Mayor Larry Johannson said he’s proud of how city staff worked with all the other partners to make the essential project a reality. He commended city administration for their work on the Environmental Licence application, which he said impressed the Manitoba Water Services Board for its thoroughness.

The water line is essential, he said, and serves Selkirk’s citizens well, and positions the city even better as we move forward.

“We won’t be having the water line in 100 per cent use, as it’s a supplemental line, but we’re planning for the future. The Number 1 thing that residents look for in a community is good water, the second thing is recreation, and I think with this water line and with the amount of work that we’ve put into our parks we’ve got 1 and 2 covered pretty good in the City of Selkirk,” Johannson said.

“While our focus was meeting the needs of our current population into the future, we’ll also be prepared for new residents and also for new commercial growth in Phase 2 of our Business Park. We have to be ready for the investments and developments that we know are coming, and we will be.”

McDermid said the city will continue to work with area residents and the RM of St. Andrews to ensure the wells are functioning properly now and into the future.

“We’re going to be working with all the local residents and the RM on an aquifer program to make sure everything is going well,” McDermid said.

“We’ll have a yearly meeting with everyone, a get together that’s a ‘how ya doing?’ kind of thing.”

Nicol confirmed the city is committed to being good neighbours, and good environmental stewards, today and tomorrow.

“This isn’t a one-time-and-done kind of thing, we’re going to be proper stewards of the aquifer, responsible users of the water and work with our neighbours to make sure that there’s enough water and it’s safe and abundant for everybody,” Nicol said.

“It was definitely needed. We did thorough research. When you make this sort of investment you have to make sure that it’s actually needed. It is clear that the best science tells us that we needed to do this and if we didn’t that the city would have significant challenges producing enough water for Selkirk in the very near future.”

Well location – RM of St. Andrews, in the area of Meadowdale and McRae roads

Pipeline route – Meadowdale Road east to Hwy. 9 then south into the City of Selkirk along Easton Drive to Agnes Street, to McLean Avenue to Water Treatment Plant.

Construction equipment will be visible along the pipeline route over the coming months, but disruption to property access will be minimal as the pipeline will be installed using directional drilling beneath private driveways.