Soaking up change from across the Globe 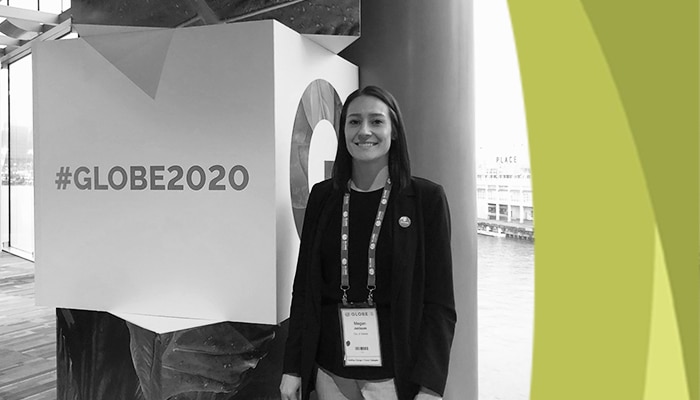 The world’s a big place and when you get accepted into a group that’s limited to 150 globally conscious citizens under the age of 35, well, you might have to pinch yourself to make sure it’s really happening.

Megan Jakilazek, Asset Management/GIS Technician for the City of Selkirk, found herself in that pinch position in December when she learned her application to Leading Change had been given the green light.

“I was really excited. To be honest, I hadn’t heard about Leading Change until it was suggested that I apply and after looking at it I realized it was a great opportunity,” Jakilazek said.

“My thoughts were that it would be a really great place to meet younger people who are also working towards sustainability goals from an outside perspective, not a government perspective, because I feel, especially in Manitoba, there’s not many groups that are focused on that type of progress.”

Leading Change is a national not-for-profit whose mission is to “activate young professional leaders to accelerate positive change”.

Jakilazek attended Leading Change ahead of Globe 2020, the largest and longest running sustainable business summit and innovation showcase in North America, held this year in Vancouver Feb. 10-13. Since 1990, 170,000 people from 97 countries have attended Globe.

Now back to work, she said the trip was an incredible experience that provided a once-in-a-lifetime opportunity to meet and exchange ideas with the movers and shakers of the climate change world.

And from her Selkirk office, she has access to an incredible world-wide peer group of like-minded leaders, who specialize in all different sectors of sustainability, circular economy and climate change.

“Having a peer group of experts like this will allow me to reach out to specific individuals and ensure best and leading practices are getting incorporated into future programs, projects and policies within the City of Selkirk,” Jakilazek said.

Learning from the best

One contact that was particularly intriguing was Alexandra Woudzia, a Green House Gas (GHG) management expert from Climate Smart Business Inc., which works to educate and certify businesses across Canada in measuring and reducing carbon emissions.

“This is something that the city might be interested in learning as we build our Climate Change Mitigation Strategy. I see a huge benefit in learning how to measure the effectiveness of sustainability initiatives that aim to reduce GHG emissions,” she said.

“By participating in events like Globe 2020, it shows citizens that once again, Selkirk is standing out as a leader in taking action against climate change and is fulfilling its responsibilities of sustainable practices and development going forward.”

Jakilazek had her work cut out for her when it came to deciding which speakers to take in during the four-day event; it was a list that included Lucas Joppa, a Chief Environmental Officer and Sarah Chandler, a Senior Director of Operation, Product Development and Environmental Initiatives. Theirs might not be household names, but their companies may ring a bell – Microsoft for Joppa and Apple for Chandler.

But beyond the big names, Jakilazek said one of the most beneficial aspects of Globe 2020 was having the best in the world united in one place, for one cause.

“What was really exciting was the fact that this wasn’t just North America, because there’s a lot of countries that are doing phenomenal climate adaptation action, and really Europe’s much farther ahead than a lot of places,” she said.

“So being able to talk to people who were where we are now several years ago, and have learned things as they’ve continued their journey, getting to talk to them, learn from them and just having that connection, that’s a great opportunity.”

Chief Administrative Officer Duane Nicol said being accepted into the Leading Change session speaks to not only Jakilazek’s skill set, but her character and commitment.

“When you put this into context, it’s 150 young sustainability professionals from across the globe, not just Canada, not just North America, but internationally. So it’s a big deal,” Nicol said.

“It’s not the first 150 that signed up, or the 150 who could afford to go, it’s 150 young people that were accepted. It’s confirmation that Leading Change sees what we see in Megan, so we’re extremely proud of her.”

What the city sees in Jakilazek is someone who led its climate change adaptation strategy, a strategy that has garnered attention from across the province and the country.

Almost seamlessly, the city integrated climate change adaptation into its day-to-day activities, earning high praise from the Prairie Climate Centre – an accomplished group of scientists and communicators who worked with Jakilazek and the city on its adaptation plan – and Catherine McKenna, the federal minister who stopped by to see how the little Manitoba city was getting it done.

Leading the charge across Canada

Dan McDermid, the city’s Director of Operations, said Jakilazek’s selection to Leading Change should come as a surprise to no one, especially those who work side by side with her in Selkirk.

“Megan has been an invaluable addition to the City’s team, we could not have gone so far with our Asset Management Program and Climate Change work without Megan’s work ethic and skill set,” McDermid said.

Nicol said the city is considered a leader in climate change adaptation and that is in no small part due to Jakilazek’s talents.

“The city is lucky to have someone of Megan’s calibre on our team, helping to deliver the work that we’re doing in climate change, and the benefit of being selected to Leading Change and being able to attend Globe 2020 is building that network of people,” Nicol said.

“When we start doing new things that we aren’t currently doing, Megan now has a network of professionals that she can reach out to from across the globe to ask for assistance and guidance and insight, and that’s invaluable.”