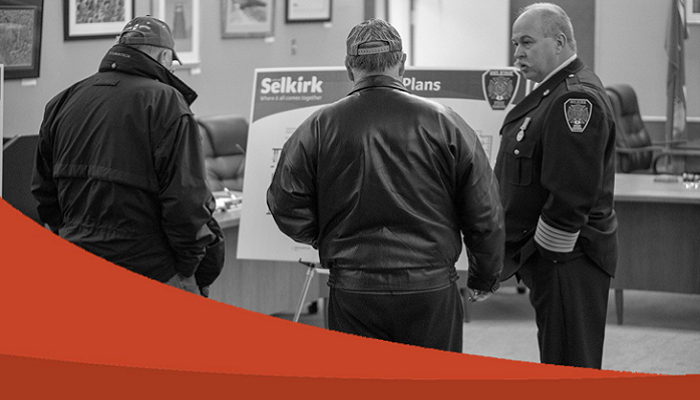 Approximately 40 people attended a City of Selkirk open house held Jan. 31 to share details of its fire hall expansion plans with members of the public.

Construction on the $3.98 million dollar project will begin this spring.

Chief Administrative Officer Duane Nicol said city staff members were on hand at the open house to answer questions and keep citizens apprised of work that’s gone into planning the expansion and why its necessary. He said the infrastructure investment is an important project that will help keep the community safer, and allow Selkirk’s firefighters to continue to be leaders in community fire safety.

“This project is a strategic investment into the safety of our community. It is aligned with our vision for a safer community and it is an early example of the benefits of using asset management principles and long-term planning to manage costs and provide improved municipal services,” Nicol said.

A three-storey building will be attached to the west side of the current fire hall on Eaton Avenue. The new building will include a truck bay for a much needed ladder truck and improve the function and update the existing building with the addition of showers, lockers and changing rooms. It will also include a year-round, indoor training suite, a training room, administrative offices and will be the new home to the city’s Emergency Operations Centre (EOC). There will be minimal service disruption during construction, which will begin in spring 2018.

Nicol said the city’s adherence to strong asset management principles means citizens won’t be hit with a huge tax increase to pay for the expansion.

Council began contributing to a Fire Hall Expansion Reserve Fund in 2013 and increased the contribution in subsequent years so taxpayers wouldn’t be burdened with a large tax hike at the end of the project. The reserve levy for taxpayers with a residential property valued at $100,000, is $21.51 annually. When the project is completed, that levy will be removed and replaced by a local improvement tax levy of $20.93.

Deputy Mayor Kelly Cook, a member of the city’s Fire Hall Taskforce, said the open house provided an opportunity to engage the public in the expansion and put on display the planning that went into such a major project.

“Having all the stakeholders engaged in the planning and design of the building I think is paramount to the success. We have an addition that meets the needs of our Fire Department and allows for the addition of a ladder truck that is critical not only for the safety of our citizens but also our firefighters,” Cook said.

“As a council we have always been supportive of making our city safer and a better place to live. This is just one more example of working together, delivering on a community need and I believe in a financially responsibly way. I cannot wait to see the project complete and as a community we can host an official opening we are all proud of.”

Selkirk Fire Chief Craig Fiebelkorn said while the need for space for a ladder truck was the catalyst of the project, the new space also provides year-round training space for Selkirk members, and an opportunity to host training sessions with their Mutual Aid partners.

“The Mutual Aid system in Manitoba is a very strong system and a very well developed system. We’re here to help our neighbours and they’re here to help us when needed. The only way to accomplish that totally is to train together,” Fiebelkorn said.