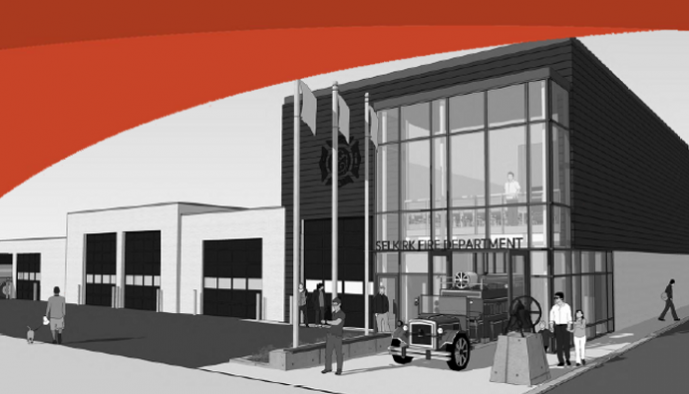 Details of Selkirk’s fire hall expansion will be on display Jan. 31 at Council Chambers from 5:30-7:00 pm while the city holds an open house to share architectural drawings as well as design specs for the $3.98 million project with the public.

A three-storey building will be attached to the west side of the current fire hall on Eaton Avenue. The new building will include a truck bay for a much needed ladder truck and improve the function and update the existing building with the addition of showers, lockers and changing rooms. It will also include a year-round, indoor training suite, a training room, administrative offices and will be the new home to the city’s Emergency Operations Centre (EOC). There will be minimal service disruption during construction, which will begin in spring 2018.

Duane Nicol, CAO for the City of Selkirk says that holding the open house reflects the City’s commitment to citizen engagement, one of the City’s strategy objectives.

“This is an important project for the City and it’s a major infrastructure investment. This open house will give citizens an opportunity to see the project plans and ask questions to get a better understanding of why this investment is so important. The Fire Hall Taskforce has done some amazing work of which the community can be really proud. The project is cost-effective and will allow us to enhance our fire-fighting capacity. The taskforce is excited to show citizens the results of this work” said Nicol.

The planning and design of the City’s fire hall expansion has been a multi-year effort undertaken by the Fire Hall Taskforce, which included members of City administration, Councillors Darlene Swiderski and Doug Poirier, Deputy Mayor Kelly Cook and members of the Selkirk Fire Department.

“We took an integrated planning approach to the designing of this expansion,” said Deputy Mayor Kelly Cook and chair of the Fire Hall Taskforce.

“We brought in Prairie Architects who then brought in the engineers, mechanical systems experts and so on. The City brought key administration who will be responsible for the operation and maintenance of the building after it’s built, and most importantly we brought in the fire fighters who will actually use the building. Everyone was at the table at the same time making sure this building meets the needs of the fire department and is cost-effective and environmentally responsible over the full-life of the building” said Cook.

Selkirk Fire Chief Craig Fiebelkorn said the addition is not only necessary, but it will be a nice addition to the revitalization of downtown. It’s a construction born out of necessity, Fiebelkorn said, noting the ladder truck is the accelerant in this case.

“The catalyst behind this whole thing is the need for a ladder truck to protect the City of Selkirk. With all the new somewhat high-rise apartments coming up, all the retail spaces coming up, you need that elevated waterway for fire suppression and rescue,” Fiebelkorn said.

“Currently, we have no room to put a ladder truck inside. The expansion out the west end of the existing building will house the truck and it will give us an interior training suite that we can use for mock rescues, as well as office space and a training room.”

Selkirk Mayor Larry Johannson said the city has a first-class fire department and the current building no longer meets the needs of a modern department that is called upon for various types of incidents today that there was no call for in years past.

Johannson said because the current hall can’t accommodate a ladder truck, which the city expects to purchase in 2019, the expansion becomes all the more necessary.

“I’m really proud of our fire department. They’re recognized for their professionalism by their peers and respected by the citizens for the important work of not only saving structures but people’s lives,” Johannson said.

Members of City Administration, Council and the fire department will be on hand to explain the design of the new facility, how it will be financed, and can respond to citizen’s questions.