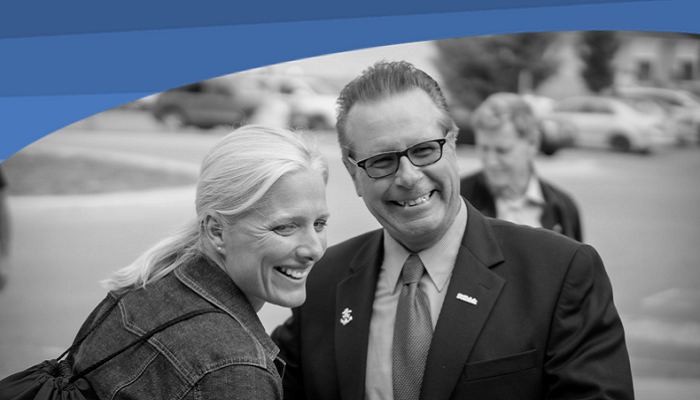 Selkirk played host this Thursday to the Honourable Catherine McKenna, Federal Minister of Environment and Climate Change, who visited the city to learn more about Selkirk’s innovative approach to reducing greenhouse gas emissions and integrating a concern for the environment into its everyday practices.

Mayor Larry Johannson said it was a huge honour to have the Minister take time out of her busy schedule to stop in Selkirk and learn more about the city’s progressive approach to adapting to climate change.

“We were thrilled when we learned the Honourable Minister McKenna was going to stop in our city and see what we’re up to as far as becoming more environmentally responsible and learning, as elected officials and city administrators, what we can do to be better global citizens,” Johannson said.

“We take that role seriously, and I’m proud of the effort that everyone here at the city puts into becoming more educated, more responsible and innovative in our thinking about our city and our planet.”

Minister McKenna spent an hour in Selkirk, and toured the Gaynor Family Regional Library, a green building, while learning about several city initiatives that helped Selkirk become one of 16 communities across the country selected to participate in the first phase of the Federation of Canadian Municipalities Capital and Asset Management Network (CAMN).

Selkirk was the only Manitoba community selected for CAMN and is the smallest of all chosen to participate.

Minister McKenna said she was happy to engage with Mayor Johannson and members of city council and staff and was impressed with their dedication to protecting the environment and fighting back against climate change.

She was especially impressed with their will to make lasting change, not just change that occurs during a four-year elected term.

“It’s great to see the City of Selkirk, in partnership with the Prairie Climate Centre, doing incredible work to protect our environment and strengthen the local economy,” Minister McKenna said.

Selkirk selection based on leadership and innovation

Selkirk received a $50,560 grant from the Federal Government, through FCM, to integrate climate change goals into its Capital Asset Management Plan (CAMP) and have been working towards that with Winnipeg’s Prairie Climate Centre.

Chief Administrative Officer Duane Nicol said Selkirk was selected because the city is becoming known as a leader in not just capital asset management, but its efforts to be a greener and a more environmentally responsible urban centre.

Being selected to CAMN alongside large urban centres like Toronto and Saskatoon gave indication that Selkirk is a serious player, and Nicol said the Minister’s visit confirms it.

“With the support of FCM, and the Prairie Climate Centre, Selkirk is getting prepared to more affordably face the challenges and risks of a warming planet. We’re also taking thoughtful steps to reduce our greenhouse gas emissions. It’s important work and it’s what our community, especially our youth, expect from their city.”

Building partnerships for a greener future

McKenna was directed to Selkirk by Dr. Ian Mauro, Co-director of Prairie Climate Centre (PCC), which has teamed with the city to help staff understand the specific impacts climate change has on Selkirk and develop an adaptation strategy to deal with those impacts. PCC recently launched climateatlas.ca, which combines climate science, mapping and storytelling to bring the global issue of climate change closer to home for Canadians.

“The City of Selkirk is at the forefront of preparing for climate change. They are demonstrating – and increasingly recognized – for reducing their greenhouse gas emissions while making their community more resilient and livable,” Mauro said.

“We’re excited by our emerging partnership”.

McKenna applauded the partnership and the efforts to make climate change knowledge accessible to all Canadians.

“Innovative technologies like the Climate Atlas of Canada not only help us better understand the impacts of climate change – but enable us to find solutions and take concrete action now, and for future generations,” she said.

Mauro and others from the non-profit PCC engaged in a workshop with city employees to identify climate change impacts on the city throughout all four seasons and the potential risks.

Nicol said the task now is to make responding to climate change part of routine in Selkirk.

“We’re changing the policies and practices and tools and engraining them into the day to day practices, so it’s not just something special we’re doing off the side of our desk, but it’s core and fundamental to what we do,” he said.

McKenna learned about the city’s decision to heat the new wastewater treatment plant without the use of fossil fuels, instead repatriating waste heat and using electric heat with the long-term ability to connect solar panels and generate its own electricity.

At the city’s water treatment plant, an older section that uses natural gas for heat is being updated with an innovative geothermal system; no new wells will be drilled, the city will use raw water to either take heat out of or deposit heat in to either heat or cool the building.

Solar panels that are being placed at the Rec Complex, the city’s Transit service, its ‘hydration station’, which has eliminated 10,222 single use plastic bottles since its inception three years ago and the city’s active transportation network were also brought to the Minister’s attention.

The Minister’s visit was filmed as part of the city’s work with the PCC. 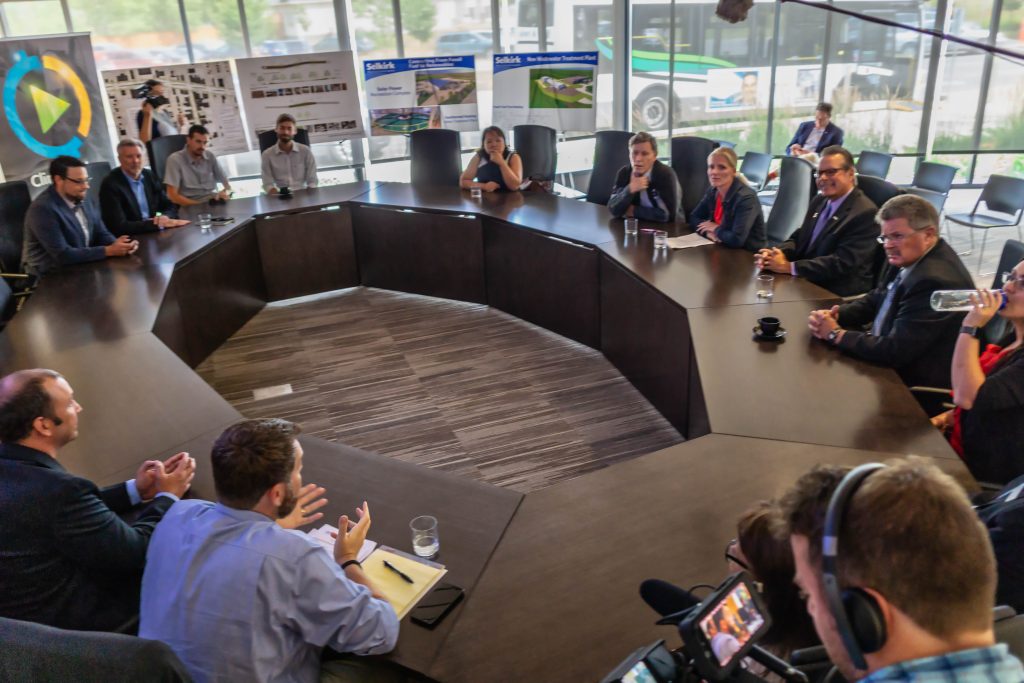 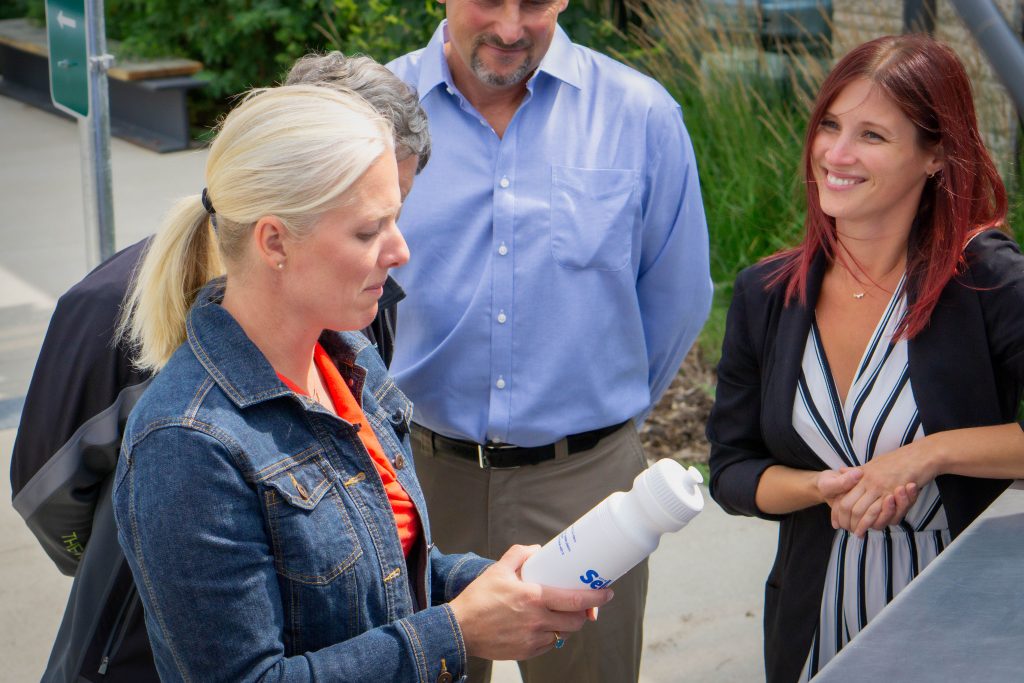 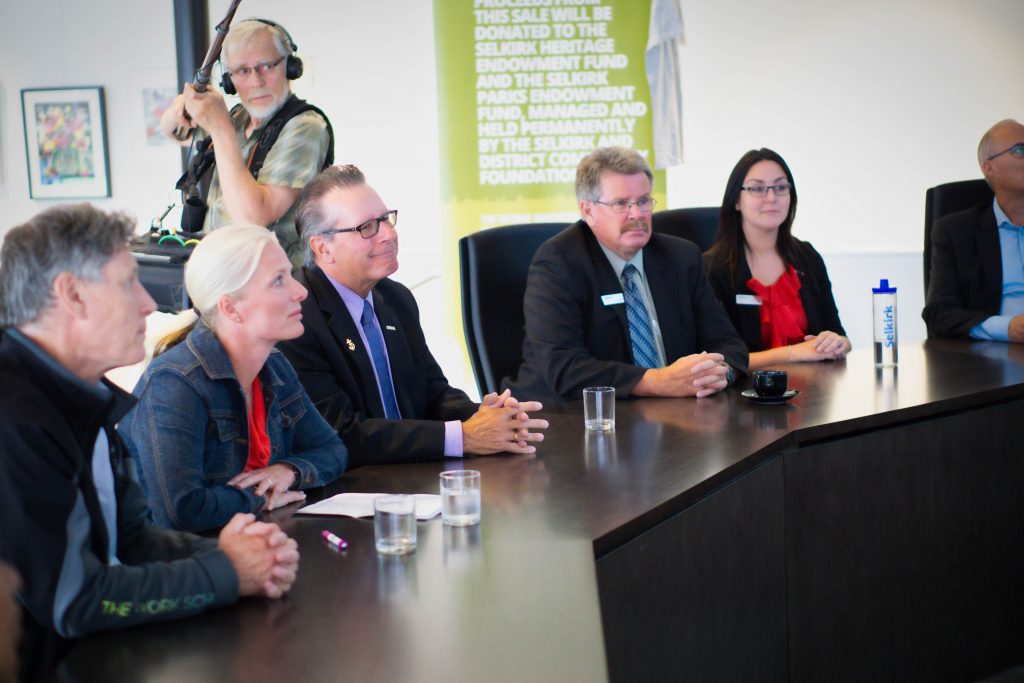