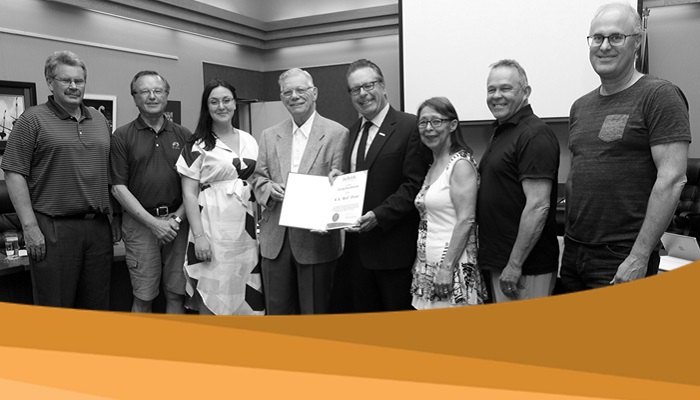 In Selkirk, the name R.S. ‘Bud’ Oliver is synonymous with municipal politics. In the international community, the name is closely aligned with what is now known as the Red River Basin Commission.

In January of this year, the man who was Selkirk’s mayor from 1984 to 2002 stepped down from his position on the RRBC’s board of directors, after an astonishing 35-year run. Oliver was recognized for his service at the annual RRBC Northern Chapter Fish Gala in March and by Selkirk Council at a ceremony May 22.

For Oliver, his time spent with RRBC – an international not-for-profit organization that facilitates a cooperative approach to water management within the basin – was an incredible learning experience in not just waterways, but in how a spirit of cooperation can affect real change across political boundaries.

It was 1984 and Oliver had just been elected Mayor of what was then the Town of Selkirk. One month after his election the call to take part in a new initiative that involved the American states of North and South Dakota and Minnesota and the Canadian province of Manitoba, all connected through the Red River Basin, arrived on his desk.

“In the middle of November there was an invitation that came from North Dakota that they were having this international summit meeting on the Red River Basin to talk about the issues of the basin,” Oliver recalled.

“Up to then, there had been discussions, but I think this was the first time that there was an approach made, that strangely enough, water ways should be dealt with as a water way as opposed to artificial political boundaries.”

A flood in 1979 had triggered a conversation, Oliver said, that looking at water in isolation wasn’t working and people in different states and provinces had to start working together.

An international summit was held in 1984 and Oliver was involved. He said it was his first real exposure to water issues.

“I knew nothing. I’d lived by the Red River all my life to that point, but as far as all of this water stuff, I was never into that,” he said.

The power of working together

His attendance at that first summit was the start of more than three decades spent working to improve water management in the basin. The first official organization that came out of the summit was The International Coalition for Land and Water Stewardship in the Red River Basin, and appointees to the board came from various levels of government in both countries and technical experts from water-related organizations.

The name was eventually shortened to The International Coalition (TIC).

The early days, even before the formation of TIC, were fraught with concerns that joining forces with others from neighbouring government bodies would be disastrous. Oliver said in those days in the States, cross-border communication was unheard of and even prohibited by legislation. In fact, there was a multi-million dollar lawsuit between Minnesota and North Dakota over diking on the Red River. Both sides built dikes on their side of the river, Oliver said, but didn’t coordinate, resulting in dikes of different heights.

“That shows how out of whack everything was then,” Oliver said.

TIC conferences were billed as non-political, non-partisan, neutral meeting grounds where you were free to talk about issues, even with representatives from other states and countries.

“What was integral to all of this was the level of trust; there was no level of trust before, it was every man for himself,” Oliver said.

While TIC was progressing and participants were excited at what the future could bring, money was tight. At one point in time, members of the board were asked to loan money out of their own pockets to keep TIC going. Oliver and many others obliged, and they all got their money back, but he said that showed the level of dedication everyone had.

He said TIC worked because despite having no legislative power, it had the power of people working together, and they could encourage better decision making.

“That’s really the only power this group has ever had. Little by little that kind of approach was working and people began to trust this organization and the stature of it was growing, because they could see they’re real, they mean it and they’re out there for the good.”

In the later part of the ‘80s, another similar-minded group was formed, called the Red River Basin Board. Eventually, the two groups formed one, and became known as the Red River Basin Commission. Oliver was chairman of TIC for 12 years, was a RRBB member and when the Commission came into being, he was vice chair, then chair, past chair and a board member until this past January. Oliver also has the somewhat unique distinction of maintaining his seat on RRBC even after his political career in Selkirk came to a close in 2002.

“When I was out of office here, they approached me to continue on being the representative of Selkirk and I was very happy to do that. That allowed me to continue on with them in a way that normally wouldn’t be, normally you have to be a member of the board of directors representing something,” he said.

City of Selkirk Coun. Darlene Swiderski, who sat on council with Oliver from 1995 – 2002 and called Oliver a “great mentor and trusted friend”, said it was no surprise to her that Oliver would be held in such high regard by the members of RRBC.

“People who worked alongside Bud on council, and even just citizens who elected him term after term, knew what a great leader he was and what he brought to the table,” Swiderski said.

“He was effective in his position, and he didn’t just sit on boards for the heck of it. If he was involved, he was involved. He was well respected, and obviously that respect crossed borders into another country.”

Mayor Larry Johannson said the fact Oliver was asked to remain on the RRBC even after his political career came to a close shows the impact he’s had everywhere.

“He had such success on RRBC as the Selkirk representative. We appreciate all his time he put in there, all his energy. He’s such a smart man and he was a pioneer and a big part of the success that the Red River Basin is having,” Johannson said.

The city’s current mayor said Oliver had a big impact on him over the years and he takes pride in what started as admiration on his part and turned into a friendship.

“During his tenure as mayor of the City of Selkirk, he was such a well respected man, so honours and accolades go out to him,” Johannson said.

“He was who I looked up to as a citizen and he’s a man that I’d be proud to model myself after and I consider him a true friend and somebody that we respect. I’m happy to be following in his footsteps.”

Selkirk CAO Duane Nicol said that while the term statesman is rarely, if ever, used to describe a municipal elected office, he says it is a title that most certainly describes Oliver.

“To this day I’ll be at a meeting or conference with other municipal officials and people will ask how Bud is doing. He had a gravitas in municipal politics that you don’t often see,” Nicol said.

“He brought people together, put petty political matters aside and focused on finding practical solutions. His leadership got stuff done and all of the people living in in the Red River basin are the better for it. Not only has Selkirk been very well represented on the RRBC board, but they have benefited immensely from having arguably one of the savviest municipal minds around.”

The RRBC today is working on a pilot project with the goal of returning dredging to the Red River, and looking at using lidar imaging to formulate plans for storing water in times of flood.

For Oliver, he said his and others determination to stick with an organization that built itself from the ground up and struggled through lean times, demonstrates how important it is to keep slugging away at causes you believe in. And, he said, it’s important to keep telling the story, so today’s visionaries don’t get discouraged when things don’t come together as quickly as they’d like.

“I sit in amazement and see what has been accomplished, and think back to the beginnings where there was loans that were made to keep it going and now their budgets are in the million dollar range,” Oliver said.

“I’ll use the word pragmatic. You have to do whatever it takes to work.”

City of Selkirk 46 mins ago

City of Selkirk 50 mins ago