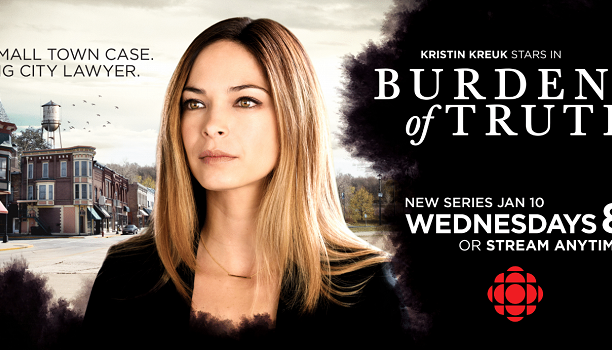 SELKIRK, MANITOBA – The City of Selkirk is celebrating the launch of the new CBC original series Burden of Truth by raising a flag to recognize their fictional equivalent ‘Millwood, Manitoba’. Selkirk serves as the location for the highly anticipated series, which filmed over 50 of its 74 days in Selkirk and surrounding area.

On January 5, 2018 the City of Selkirk, along with Manitoba Film & Music, Eagle Vision Inc. and ICF Films will host a flag raising event at the city’s Waterfront with a few words from Selkirk Mayor Larry Johannson, followed by a small reception supported by Eagle Vision Inc. at the newly restored Riverside Grill. Representatives from the City of Selkirk, Manitoba Film & Music and Burden of Truth’s Manitoba producer Eagle Vision Inc. will be on hand to answer questions about filming in Selkirk and the launch of the series. Premiering January 10 at 8:00 p.m. on CBC, Burden of Truth (10×60) is a legal drama starring Kristin Kreuk (Smallville, Beauty and the Beast) as a fast-rising corporate attorney who returns to her small hometown of Millwood – a prairie town with an industrial past and uncertain future – to represent a major client in a case against some sick high school girls.

While shooting in Selkirk in the summer and fall of 2017, the production had a significant economic impact and helped renovate and refurbish the Riverside Grill, a local treasure and social enterprise that offers workforce training to people with disabilities.

“It was very exciting for us to welcome the production to Selkirk,” said Selkirk Mayor Larry Johannson. “There is a real sense of pride for the residents here. Many people in Selkirk had a positive experience dealing with the production and the economic impact has been significant. People are really looking forward to the premiere.”

“The city was extremely welcoming and a dream to work with,” said series producer Kyle Irving, a partner at Manitoba production company Eagle Vision Inc. “We spent nearly a million dollars this season to shoot Selkirk as Millwood. That money goes directly into the economy in the form of employment, location rentals, purchase of goods and services, hotel rooms, gas and more.”

Burden of Truth is one of many productions that have used locations outside Winnipeg. In Manitoba Film & Music’s last fiscal year (April 1, 2016 to March 31, 2017), 40% of shooting days took place in 24 different communities outside the capital.

“The economic impact of the production industry in Manitoba is felt all over the province,” said Carole Vivier, CEO & Film Commissioner at Manitoba Film & Music. “We are seeing communities benefit from dollars spent, but also from increased community pride and tourism opportunities.”

To thank the City of Selkirk and those involved in the production, the Selkirk Biz, MFM, Eagle Vision Inc., ICF Films, and other partners are organizing a private red carpet screening of the pilot episode of Burden of Truth on January 10, 2018 at the Selkirk Boston Pizza. The event is by invitation only and is meant to thank those involved with the production for their support. Proceeds from the event will go to Selkirk Biz and the Selkirk Friendship Centre.