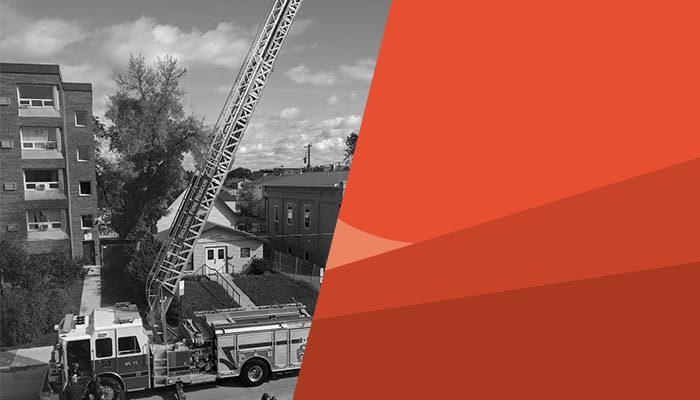 When the City of Selkirk approved the purchase of a ladder truck for its fire department in 2018, there were some who wondered why money was being spent on equipment perceived to only fight fires in high rises.

“The reason you have a ladder truck is elevated streams and rescue,” Thorsteinson said.

“Elevated streams are to get water above a building, especially in an industrial setting or a big retail outlet. They have big flat roofs and you gotta be crazy to put somebody on a flat roof. Two by fours can be bought everyday but lives can’t.”

Mayor Larry Johannson said protecting the citizens of Selkirk, and their investments in their properties, is paramount and having the best equipment available for the Selkirk Fire Department is crucial.

“Industry and commercial developers want to know that their investments are going to be safe and secure,” Johannson said.

“They want to know that the community can provide the services and resources they need to be successful. That’s water, wastewater, and a successful, well-trained and well-equipped fire department is part of that equation as well.”

A massive fire that destroyed at least one business and saw others suffer substantial losses in an industrial park in the Rural Municipality of Macdonald on June 30 has shone a light on the importance of fire protection.

There were many factors that worked against a successful outcome in the Macdonald Industrial Park fire, but in the City of Selkirk the Strategic Plan and a strong Capital Asset Management Program ensures the Fire Department is prepared as best it can be.

City CAO, Duane Nicol said a lot of factors go into peoples’ decisions to locate their home or their business in a community, sometimes services like firefighting are taken for granted. He says the Macdonald Industrial Park fire should be a reminder that the quality of fire protection services is just as important as something like property taxes.

“Fire protection doesn’t just happen. It takes proper capital and operating investment. We have an exceptional team here in Selkirk and the city has made the critical investments into fleet, facility, and equipment to ensure the team has the tools it needs,” Nicol said.

“Not only does this make the people who live and work in Selkirk safer, but it protects investments. Lower levels of service will not only increase risk but will drive up costs like insurance for property owners.”

As the city grows, so does the need for added protection

The city’s ladder truck is a 2008 model and was purchased for $420,000, about a third of the price of a brand new one at the time. The truck had 10 years on it, leaving the city with at least 15 years of service from the truck. All fire apparatus in Canada must be recertified after 25 years of service.

The city’s original ladder truck was put out of service in 2006. It could not be replaced at that time as modern ladder trucks would not fit within the city’s existing fire hall. Selkirk Fire adopted alternate methods to manage without a ladder truck.

The city’s growth, and the increasing numbers of multi-storey apartment complexes and large footprint retail buildings made the ladder truck a priority.

In 2019 the City of Selkirk opened a three-story expansion to the centrally located fire hall, in part to accommodate the new ladder truck and to provide modern and enhanced year-round training space for the department.

“The $4 million fire hall expansion was yet another example of our strategic investment into the core municipal infrastructure that underpins the commercial, residential and industrial expansion we have seen over the past few years,” Johannson said.

Even if there were no tall buildings to protect, a ladder truck improves safety for the firefighters and their ability to extinguish a fire.

It takes one person one minute to have the ladder up with water flowing and Thorsteinson says fighting a fire from above is often preferable to going inside a structure or standing on top of it.

The experienced Fire Chief says even a storey-and-a-half or two-storey house with an open concept design can be risky to get on top of.

“You might need the ladder there because you don’t want to put firefighters on a roof when there’s a lot of heat underneath it and it’s got lightweight trusses,” he said.

“If you’re shooting from above you’re in a defensive position.”

Johannson said the citizens of Selkirk, and those who’ve invested in Selkirk are well served by the city’s fire department.

“We are very proud of our department and of the quality of service and protection they provide. They truly are a fundamental part of what makes Selkirk such a great place to life, work, invest, and play,” he said.