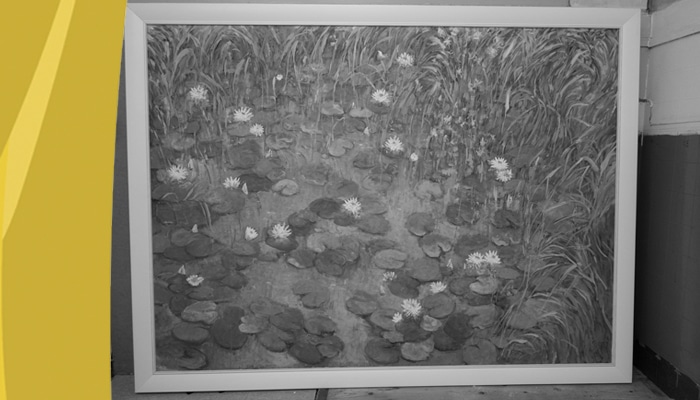 A forgotten painting, an artistic soul and a generous heart have resulted in a $1,000 donation from a Selkirk couple to the Selkirk Heritage Endowment Fund (SHEF).

The painting, called ‘The Lily Pond’, was one of two found by Dorothy Myhal-Gély while searching for something else in the garage. She called her husband, Gabriel Gély , who had painted them some 20 years ago, to see her find.

Gabriel had forgotten all about the paintings, and the duo called their friend Mary Thorne to see what she thought might be a fitting future for them.

Thorne, a fellow artist and volunteer of the Gwen Fox Gallery, framed the 5×4-foot paintings and later brokered a deal with the City of Selkirk to hang them in the civic offices. If the paintings sold, the Gélys decided they would donate 20 per cent of the sale to SHEF, a cause they had supported in the past.

In early September the painting sold for $5,000 and the Gélys made the donation and penned a touching note to the City of Selkirk. It read:

‘Greetings to the City of Selkirk Executive Members; We wish to express our appreciation regarding your generosity in allowing space to display ‘The Lily Pond’ painting. Enclosed, please find a donation to SHEF. Your kindness is very much appreciated by us – Gabriel Gély (artist) and Dorothy Myhal-Gély’.

Gabriel was born in France but had a dream to spend time in the Canadian North, which came true in 1952 when he left his homeland. He settled in the arctic and spent most of the next 35 years there. The reality of his dream did not disappoint and Gabriel’s artwork was a reflection of the people and culture he surrounded himself with.

Selkirk Chief Administrative Officer Duane Nicol, who was a City of Selkirk councillor in 2012 when SHEF was established, said it came about as a result of the city’s ‘Capturing Our Shared Heritage’ vision paper that was adopted by council of the day.

“In addition to the city’s annual contribution to the SHEF, the fund has grown as a result of many private donations from citizens and folks who have a passion for history. The Gély’s  extremely generous donation is the fund’s largest one-time donation we’ve ever received. We are so appreciative of Dorothy and Gabriel’s donation, and it has been an honour to have these amazing works of art in our office – I’m going to miss Lily Pond to be honest. It is beautiful” Nicol said.

SHEF aligns with the city’s Strategic Plan, Nicol said, in that it aims to build a strong and stable local economy by helping to revitalize Selkirk’s image and capitalize on Selkirk’s tourism potential.

The Selkirk and District Community Foundation’s Executive Director Bev Clegg Says she is always thrilled to learn about fantastic stories of generosity.

“Dorothy and Gabriel supporting Selkirk’s rich history through this endowment is a great example of how thoughtful, community minded people find creative ways to give to causes they care about.  Like all donations given to the Foundation, this gift will be held in perpetuity – giving today, gives for tomorrow and is always ‘Here for Good’,” Clegg said.

Donations to SHEF can be made in person at the City of Selkirk Civic Office or online. Donations can be made in memory or honour of a friend, or loved one and to celebrate someone or something.

“With the donor’s permission, donations are permanently recognized by the city and are currently displayed on our virtual museum website. So, as a donor, you’re actually becoming part of our history, our legacy” said Nicol

For a limited time, anyone making a donation of $50 or more to the SHEF will receive a gift from the City  of a beautiful hard cover copy of the Canada 150 National Mural Mosaic book, valued at $75.

To learn more about our Endowments or to make a donation today, click here.