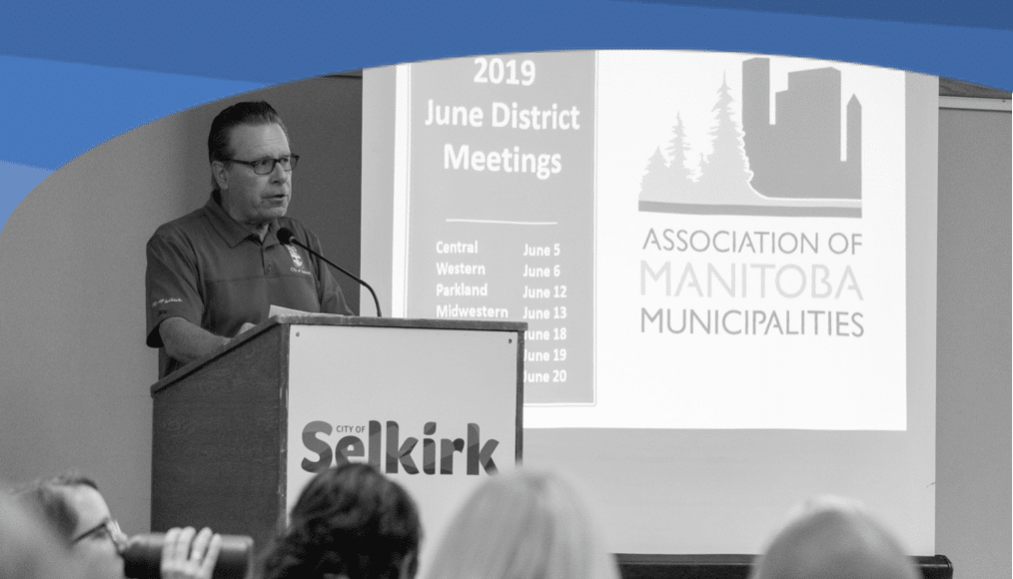 Mayor Larry Johannson, who is the Chair of AMM’s Cities Caucus, said resolutions passed at the district level move on to the annual convention in November and have the ability to impact change in the province. From now until the convention, the resolution will be circulated to other municipalities to gain support.

Selkirk’s first resolution seeks to have the Municipal Act changed to allow more flexibility in the setting of prices, which currently has to be done through a by-law, and the second resolution calls upon the AMM to lobby the provincial government to index the provincial support grant at the rate of Consumer Price Index or higher. The grant – which provides municipalities with financial support for various programs – has been frozen for the past three years.

“The AMM is an important lobby group,” Johannson said.

“We saw that last year when a resolution to reinstate the Manitoba Roads and Bridges Program, which we co-authored with the City of Thompson, was backed by 102 AMM member municipalities, setting a record for support and resulting in the province bringing the program back. That’s powerful stuff.”

The city prides itself on taking a leading role in many ways including asset management, climate change and environmental stewardship. Hosting the AMM District meeting and getting two resolutions approved is an indication others in the province have confidence in Selkirk.

Joe Masi, Executive Director of AMM, thanked the city in a letter on behalf of the Board of Directors, for hosting the meeting.

“The organization and hard work that council and administration staff put into this event was evident, greatly appreciated and a certain success,” Masi said.

“Congratulations on hosting an impressive meeting and thank you for your assistance, cooperation and hospitality.”

The 90-plus representatives at the meeting were given wildflower seeds from Prairie Originals as a gift and a donation was made to the Selkirk Parks Endowment Fund in all their names.

Attendees were given a tour of the Selkirk Recreation Complex, which was in the midst of being decorated for the graduation ceremonies. Of particular interest to attendees was the new solar generation capacity of the centre.

Councillor Kelly Cook was re-elected as Interlake District Director, a position he has held since being elected last November in a by-election. Directors serve two-year terms.

Cook said he’s looking forward to his term, having gained some valuable experience during the last six months.

“I am excited to be re-elected to serve as a Director to the AMM Board and represent the Interlake District,” Cook said.

“I look forward to being a strong voice for our district.”

After the meeting, city officials hosted a “sold-out” tour of Selkirk’s many infrastructure projects, with stops at the new wastewater treatment plant, Manitoba Ave. East, the fire hall expansion and a visit to the Vaughan Ave. West residential development.

Selkirk is the one of only two cities in the Interlake region, which also includes neighbouring municipalities West St. Paul and St. Andrews.

Cook joins past Councillor Dawn Macfarlane as only the second Selkirk council member to ever serve on the AMM Board of Directors in its 20-year history. Macfarlane served on the founding AMM Board. Former Mayor Bud Oliver served as President of the Manitoba Association of Urban Municipalities, one of the two organizations that joined to create the AMM in 1998.  