Wisconsin couple found love with each other, and Selkirk’s catfish 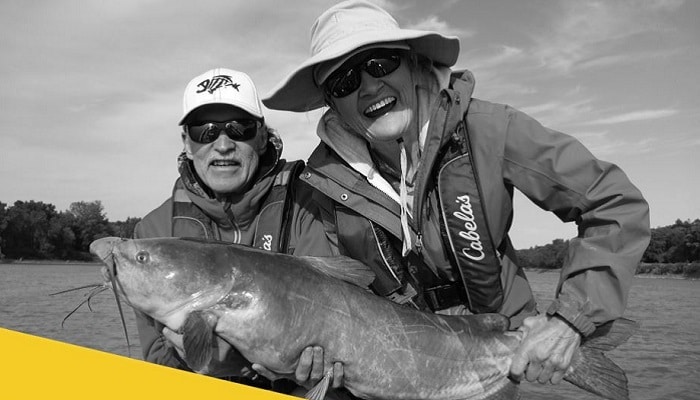 When the City received a phone call from Wisconsin requesting a $150 order for the highly sought-after Chuck-Wear, they just had to know more.

There’s countless stories of the big fish that got away but Dick and Patti Skweres, who hail from Star Prairie, Wisconsin, don’t have any of those tales to tell from their visit last summer to Selkirk, Manitoba, Canada.

Dick, a life-long fisherman, had heard about Selkirk’s reputation for great big Catfish and plenty of them, set his sights on the little riverside city last July.

“I’ve been a lifelong avid fisherman and I’ve been aware for many years now that the Red River by Selkirk has a tremendous population of large channel Catfish,” Skweres said, and when a planned trip to Ontario fell through, he had a suggestion for his wife, Patti.

“I said to my wife ‘why don’t we go up to Manitoba and see how this cat fishing is’?”

It didn’t take long for the couple to find out – during 12 hours over two days they caught 43 cats.

“The first day we fished from eight in the morning till maybe 4 o’clock and we caught 30 that first day,” Dick said.

“We couldn’t believe it. It was amazing. They said they’d been catching 10 to 15 a day, but for some reason they were very active when we were out there.”

He was thrilled that the cats were so welcoming to their American visitors, and he and Patti returned the favour by releasing every single one they caught.

“It was one of these things that I always wanted to do, I try for fish at least once a year that I don’t normally fish for, whether it be a cat fish or musky or anything different than walleye,” he said.

“My wife and I are both retired, we’re both 74 years old. We’re getting to the point where we’re both in good health but I don’t know how much longer we can keep fishing.”

Dick has travelled for fishing throughout his life, and recalled at trip to Florida when he caught a seven-and-a-half foot long sailfish followed by a 200-pound hammerhead shark the following day.

When he and Patti hit the road and drove to Selkirk last summer, he was anticipating good fishing, but admits he wasn’t prepared for what came next – the fish seemed to be everywhere.

“We just fished a 10 mile strip of the river, no farther than that and every spot that the guide would stop the boat and throw out the anchor, we seemed to catch like three or four fish in each spot,” he said.

“And then you wait about 10 minutes if you don’t get a bite, pick up and go to the next spot and do the same thing again. I would consider it very fast fishing. Anytime you can catch 30 large fish like that in one day.”

If anything can rival Dick’s love for fishing, it’s his love for his wife Patti. The two were married just five years ago.

“I’ve fished my whole life, I’m a retired financial accountant and my wife is a retired beautician. I was actually single my whole life up until five years ago when I met and married my wife. I retired at age 62 and I was single at that time and then some time after that I got married for the first time. So far so good,” he laughed.

Patti didn’t fish, but Dick snagged her at just the right time in his life and she’s fallen in love with not only Dick, but fishing as well.

“She never fished, her family wasn’t into that so, this is kind of a sad part of the story, but there’s two fellas that I fished with my entire life, one was my brother in law Roger, and the other was my life-long friend Jim and they both died now in the last four to eight years,” Dick said.

“So I lost my two fishing partners and I talked my new wife into taking up fishing and she loves it. And she’s getting pretty good at it.”

Their fishing style varies though.

“When I go fishing I have to catch something every once in a while to consider it fun,” he said.

“My wife can be out on the lake and enjoy it even if she doesn’t catch anything. Just seeing the eagles and loons and everything else and just being out on the water on a nice sunny day. But I kinda need to catch something.”

Couple wearing their Selkirk Pride and planning to return

“The plan was always to open the border to selling Chuck-Wear online” said the City’s Marketing & Communications Coordinator, Vanessa Figus. “This just kicked us into gear to do it.”

The duo, who ordered T-shirts and hoodies from the City of Selkirk’s Chuck-wear line, plan to return to Selkirk this summer and spend a bit more time fishing and seeing the sites.

“We’ve talked about it and decided we want to come back and do it at least once more and maybe spend a little more time up there looking around and seeing what else there is to see, I’m sure there’s more than just the catfish,” he laughed.

Chuck-Wear is available for purchase online (North-America wide) and in-stores. For a list of retail locations or to purchase today, click HERE