City invites residents in for peak at this years road repairs 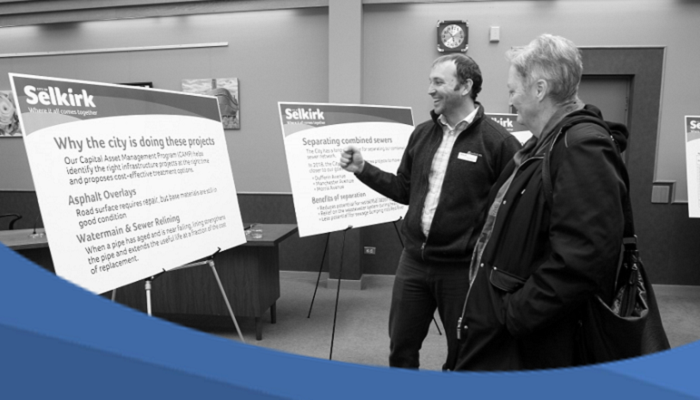 The City of Selkirk invited residents that will be impacted by construction this summer to council chambers to learn why their street was selected for improvements and how much the city is investing.

A total of $2 million will be spent on 14 infrastructure projects that have been identified through the city’s Capital Asset Management Program (CAMP) as being at the right time in their lifecycle for cost effective upgrades. The work began in March and will continue through to September.

Selkirk Mayor Larry Johannson said the city is more informed about what streets should be repaired, thanks to CAMP, and it wants to make sure the citizens know what to expect when their street is being repaired.

“I think it’s important, and appreciated, that you’re given the heads up when big machinery is going to show up and start work on your street. I know that I would be happy if I knew ahead of time that my street was going to be worked on and I knew why,” Johannson said.

“City staff and council are taking that approach, that we need to make sure citizens are informed. And we want them to know, that through good capital asset management, there’s a reason why their street was selected. It’s the same as being a good neighbour, we want to keep our neighbours informed.”

More than 50 people came to council chambers on March 28 to learn about the work that will be done on their streets this spring, summer and fall.

Chief Administrative Officer Duane Nicol said home and business owners who would be directly affected by the work were invited to come see the scope of the work and ask questions of city staff about what will be happening on their street. They were also given the opportunity to sign up for an email list that will keep them informed as the work date gets closer and about any potential changes.

“We invited them so we could give them a very specific understanding of how this is going to impact them, and encourage them to sign up and be on our email contact list so that as the project affecting them progresses we can give them a heads up, and say ‘hey, this is when it’s going to happen, this is what it’s going to look like,” Nicol said.

“It’s a higher level of communication so people have a better sense of the work that’s being done and why.”

The city had storyboards set up that showed all the different projects and when they will be taking place. There were comment boards as well, so people could leave messages for city staff and council to consider.

Nicol said it’s important for people to understand that CAMP helps the city determine what work gets done and when, and it’s a strategic decision that puts city dollars to work in the most effective way.

“We want people to understand why we selected their street, so we’re talking about capital asset management, and the processes that we’re following to make better decisions. Our goal is best quality services with lower long-term costs,” he said.

“We’re helping people understand how much this work costs because a lot people are surprised by the costs. When we tell them we’re putting new asphalt on their road, say Vaughan Ave.  from Annie to Agnes and that one block  costs over $118,000, they’re surprised by that number.”

The city has significantly increased  its infrastructure investments over the last four years, spending over $800,000 per year on roads alone compared to and average of  about $400,000 total in  previous years.

“There’s been a serious increase in investment, in part through  support of the provincial and federal governments and their various infrastructure support programs. But the increase also reflects the City’s strategic focus on reinvesting in our core infrastructure and therefore encouraging community renewal. In 2018 we’re spending over $790,000 on road renewal and over $500,000 on water and sewer renewal”, Nicol said.

“There’s a lot more to be done, and CAMP is allowing us to do the right work at the right time. It’s about being able to provide quality services today and well into the future. It’s about the sustainability of our community.”