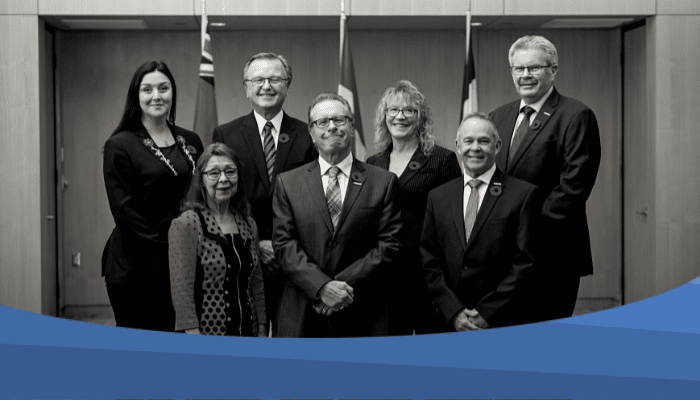 After the votes were counted on Oct. 26 and the totals revealed the city’s incumbent mayor and all six members of council had been re-elected but there was little time for celebration – the new council was sworn in six days later in order to discharge their first legislated responsibility, holding the 2022 Board of Revision hearing on Nov. 3.

For Mayor Larry Johannson, who takes the seat at the head of council for the fourth consecutive term, it was a happy occasion, but also one that provided time to reflect.

“I’m so proud of all the people who put their names forward to seek a spot at the council table, to take that bold step of letting their name stand to work for their community and make our city a better place for everyone,” Johannson said.

“This election had a very strong slate of candidates and it made for an interesting night and at the end of it all, I thank everyone who ran, and I’m sure all candidates thank the public for the discussions at the doorstep and for their support. This council has done good work over the last four years, during one of the most trying times we have experienced in generations, and I know we’re all looking forward to putting in the hard work and meeting the challenges this next term will bring. Every one of the re-elected members of council is honoured and appreciative of the confidence shown in us and for the community’s support”

And while any numbers of things can be gleaned from the results of any election, a complete return of council – combined with a lower voter turnout, – can be a sign of voter satisfaction.

Christopher Adams, adjunct professor in political studies at the University of Manitoba, says there are all kinds of reasons for low voter turnout, and when incumbents are challenged, he has a few theories.

“When there’s an incumbent, usually the turnout is lower, and I think that’s because people just assume that person will win that election,” Adams said.

“Secondly incumbents have advantages over their challengers, and thirdly it might indicate people are happy with their representation.”

Around the region, many incumbents did not get re-elected. Johannson said he believes the election results show satisfaction with council and the direction it has been moving in over the last term. And he cited several ongoing projects that represent the good work council has been doing.

“We’ve seen a lot of change in this election, in our region and throughout Manitoba. You can’t take re-election for granted. You have to work to earn the voters’ trust. Incumbents have to run on their record as well as their vision for the future. I think these results demonstrate that we have a strong record and people support the vision laid out in our community strategic plan. We have some very exciting projects underway,” Johannson said.

In September, the city announced it had entered into a land option to purchase with Canadian Premium Sand (CPS), a move that puts the company’s plan to locate North America’s only patterned solar glass manufacturing plant in Selkirk one step closer to reality.

The plant represents an investment of more than $400 million into the city and could bring with it 300 full-time jobs.

It’s a step towards a stronger, stable local economy aligning with the community strategic plan.

“This would be the largest industrial investment into Selkirk in more than a hundred years and it speaks volumes of the work of our council, and our administration and the reputation the city has earned,” Johannson said.

“Canadian Premium Sand could have located its plant anywhere in North America but chose Selkirk. It’s an incredible vote of confidence in our city that will bring hundreds of jobs here.”

The city also attracted Charbone Hydrogen Corporation, another clean energy corporation who signed an agreement with Selkirk in June to bring the province’s first green hydrogen regional hub here. The hub will be the second in Canada and first in Manitoba and Western Canada. Johannson said the city’s Greenhouse Gas Accountability Bylaw, climate change mitigation, commitment to infrastructure renewal and asset management all played key roles in Charbone’s decision making.

“We pride ourselves on our efforts to reduce Greenhouse Gas emissions. We’ve made GHG reduction the law, and we’re integrating climate mitigation work into our daily operations to be greener in every way possible. Having Charbone see what we’re doing in Selkirk and like what we have to offer, validates what we’re doing,” Johannson said.

“We have made the right investments and positioned ourselves to attract sustainable development and welcome new businesses, like CPS and Charbone, to Selkirk. This will grow the economy and provide hundreds of new local jobs.”

Residential development over the last four years has also been done in an intentional and sustainable way. The city’s largest residential development in decades, the Vaughan Avenue West housing development, which broke ground in 2019, will feature more than 100 homes and be an extension of Vaughan that spans west from Annie Street.

The higher density development fits the needs of new homeowners as well as those looking to downsize, it’s a modern, urban neighbourhood that is within walking distance to shopping, the Gaynor Family Regional Library and the Selkirk Rec Complex.

Johannson said the new council has lots of significant work to do over the next four years.

“We have to consult with the community and update our community strategic plan. We’ve completed a lot of the work that was set out in our original plan and we’re continuing to work on some items. It’s important that the strategic plan be updated and refreshed with the updated aspirations and vision for our community,” Johannson said.

In addition to the CPS, Charbone, and Vaughan Avenue West projects already underway, Johannson suggests that there are key development projects that this council expects to consider over the next four years.

“Implementation of the west end concept plan and continuing the implementation of our downtown renewal strategy will be high on the agenda for the new council. There is a new momentum in Selkirk and we must use that momentum to make our city stronger, for all citizens,” he said.

Key issues the new council will have to address include the continuation of the city’s infrastructure renewal and maintenance through its award-winning asset management program and preparing the community for the impacts of climate change.

“We have invested a record amount of money into renewing our critical infrastructure, from the new wastewater treatment plant to renewing water lines throughout the city. We’re reconstructing and resurfacing more roads than ever before,” Johannson said.

“But we know there is a lot more to do. This past spring we had a glimpse of the chaotic weather events that the future climate has in store for us. Over the next four years we have to continue our work to make Selkirk more resilient to the consequences of the changing climate. There is no shortage of work, but I know that this council, and our community are up for the challenge.”