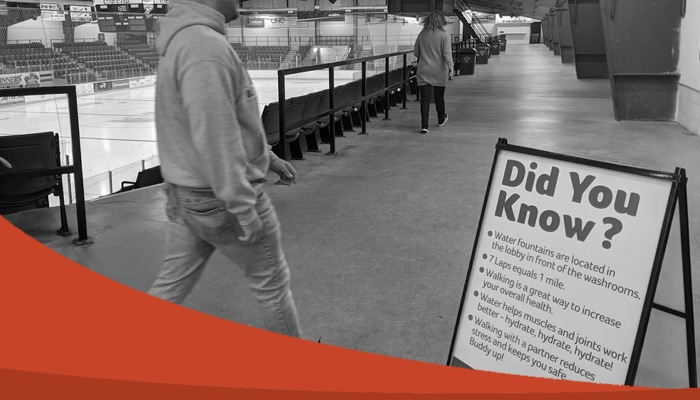 Len Bacon regularly partakes in the City of Selkirk’s Walk and Jog program at the Rec Complex, and though the 78-year-old is hesitant to say he goes everyday, when the snow flies and the wind picks up, it often blows Len inside to get his heart pumping.

“It’s good exercise and you’re not going to go walking in a snow bank when it’s 30 below,” Len says.

“I don’t go everyday, but sometimes I have gone twice a day in the winter. It’s wonderful…I think it’s an excellent place, it’s a great building.”

A walk to remember

Selkirk is a walker’s delight during the summer months, with active transportation pathways on Manitoba Avenue and in several city parks as well as plenty of sidewalks that are suitable for a stroll. In the winter, we’d all agree most days its best, and safer, to move inside.

The Walk & Jog program runs Monday to Friday at the Rec Complex, from 8:30 a.m. to 4 p.m. from September to April. It does not run on holidays or during special events.

Shelly Leonard, program coordinator, Culture, Recreation and Green Transportation, says Walk & Jog aligns with the city’s Strategic Plan that calls for the city to provide the best possible recreation opportunities for Selkirk residents, create a vibrant, safe and healthy community and serve as a hub for culture and recreation.

“It’s a great regional program that is open to residents and non-residents who want to remain physically active in a safe environment during the cold winter months,” Leonard says.

“There’s plenty of space, you can walk alone or with a group and it’s very affordable. It’s always nice to see people being active and taking advantage of the Rec Complex.”

The city has two part-time employees who are onsite during the Walk & Jog program.

Last year, 188 participants visited the Walk & Jog program a total of 10,936 times. Just over half of the participants hail from Selkirk, 56 per cent, with 20 per cent coming from St. Andrews, 13 per cent from St. Clements and 11 per cent from various communities including, Stonewall, Riverton and the City of Winnipeg.

Selkirk residents pay $40 for the entire program year, or a drop-in rate of $2. Non-residents pay $60 for the program year or a $3 drop-in rate. By comparison, the City of Portage la Prairie, for example, charges $145 per year for use of the walking path in Stride Place. Thompson’s price is $523.65 for use of its walking track, but the price also includes access to a fitness centre.

Selkirk’s program is subsidized by the city, which covers 60 per cent of the cost to run Walk & Jog.

“It also physically benefits you.”

Walking is a great activity that most can do. According to Health Canada, walking is a simple exercise that will benefit people of all ages and it recommends people go for a walk every day and seek out places with walking paths.

A recent Northwest University study of 1,500 older adults with osteoarthritis symptoms like stiffness and aches but no disability found that those who walked briskly for at least one hour per week reduced their risk of acquiring a daily-living disability, such as being unable to dress themselves, by 45 per cent. The risk of developing a mobility disability, like walking too slowly to be able to cross the street, was reduced by 85 per cent.

According to the CBC Life article ‘The benefits of walking and how to get the most out of it’, it’s predicted that one in four Canadians will be suffering from osteoarthritis by 2035. The bright side of that rather dark statistic is that walking can help keep the aches and pains at bay.

The article says walking can help with weight loss, ease joint pain and strengthen your immunity and that moving from a sedentary lifestyle to one that has you taking 10,000 steps a day could lower your risk of mortality by 46 per cent.

It also says walking causes less stress on your joints than other activities, like running, and is perfect for older people or people who have been living a sedentary lifestyle and want to begin exercising.

The city has made $60,000 in improvements to the Rec Complex over the summer, including a switch to LED lighting, which makes it brighter inside.

The bridge over the entranceway for the Zamboni has been widened. Previously, it was quite narrow and could accommodate just one walker at a time. Now two can cross together.

Seats were also removed on the east side of the arena at both ends to make the walking area wider.

The improvements were done as part of the city’s Capital Asset Management program and will help extend the life of the building and reduce energy costs.

Len says the walking surface is very even and always clean. And there’s a railing for those who need it. There are also plenty of places to sit and rest if you need to take a break during your walk.

You can get your Walk & Jog pass at Selkirk’s Culture, Recreation and Green Transportation offices at 630 Sophia Street, or you can pay at the Rec Complex during program hours.