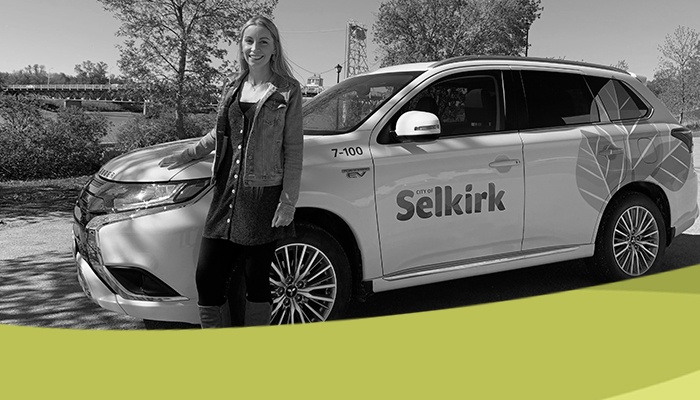 Sarah Lawrynuik’s February article for the Winnipeg Free Press, ‘When boring is a thrill’, shone a light on Selkirk’s dedication to integrating climate change into day to day operations and it was her first real contact with the city’s management and staff.

As the paper’s climate change reporter, she was already familiar with Selkirk’s efforts to adapt to a changing climate – efforts that include everything from separating storm sewers to purchasing land – and she admits the policies behind the city’s practices were exciting to her.

“I read a lot of policy documents and Selkirk comes up in a lot of them because of the forward thinking they are doing,” Lawrynuik said.

“It’s boring policy that really makes a difference in the end…in the municipal policy climate world, Selkirk is very big.”

Lawrynuik was so impressed with the work going on in the city that when a job posting for an energy efficiency program administrator came up, she applied and got the job.

She liked what she heard when she was interviewing city staff for the Free Press article – there was a vision and a team created around that vision, all working cohesively toward a common goal.

“There was something really inspiring about how the City’s team was working together to create something that people across the country are noticing. It’s a small town, but it’s doing really big things and that’s pretty fantastic,” she said.

The energy efficiency program administrator position is funded by Efficiency Manitoba under its Community Energy Efficiency Program. Lawrynuik, who has a masters degree in climate change and energy policy, will work with residents, businesses and the city itself to help them become more energy efficient and lower greenhouse gas emissions.

Selkirk CAO Duane Nicol said the city has worked hard to develop its award-winning climate change adaptation strategy and to support the team that implements it and Lawrynuik is a welcomed addition.

“Sarah was exposed to the culture of the city in a unique way, by doing that profile for the Winnipeg Free Press and was intrigued enough by what we’re doing that she applied for the position,” Nicol said.

“We are really excited that Sarah chose to bring her talent, expertise and passion to the city. Professionals of her calibre are in high demand, not just in Manitoba, or Canada, but globally.  She is another one of a series of creative and talented people that we’ve been able to attract. People who want to work in an environment like we’ve created here. A workplace that allows people to bring their full skill sets to bear on important issues and challenging work that has positive impact on citizens. Because we are small, they get exposed to a lot of different things they wouldn’t in a large organization. It’s a war for talent out there and Selkirk Council has encouraged and supported us to build a progressive workplace that attracts and retains really, really good people.”

The city has been recognized as a leader in climate change adaptation, with awards including the Canadian Network of Asset Managers Tereo award, earned largely for the city’s commitment to using the principles of asset management to integrate its Climate Change Adaptation Strategy into day-to-day city operations, and invitations to participate in events like the Municipal Climate Services Collaborative, a joint initiative of the Federation of Canadian Municipalities and the federal government’s Canadian Centre for Climate Services.

Selkirk’s green initiatives come in all forms, from fully electric and hybrid vehicles and buses, solar powered infrastructure, to the inclusion of natural assets like trees in its Capital Asset Management Program (CAMP), and the technology used in its new wastewater treatment plant that make it among the most environmentally responsible in the country.

In 2018, Selkirk played host to the Honourable Catherine McKenna, Federal Minister of Environment and Climate Change, who visited the city to learn more about Selkirk’s innovative approach to reducing greenhouse gas emissions and integrating a concern for the environment into its everyday practices.

The Dauphin born, Dryden raised Lawrynuik had the opportunity as a journalist to work almost from coast to coast in Canada and her profession also took her to Iraq, Ukraine and Portugal.

She was in Iraq as a freelance journalist covering the battle against Isis, which fulfilled a desire she had to travel to the Middle East and learn first hand what people there live with day in and day out.

“I’ve always had a fascination with the Middle East. My first degree was in political science and economics, but focused on the Middle East and I had always wanted to go there and understand more about what it is that drives people in that region and just put human stories to the news cycle,” she said.

“Textbooks are detached from the humanity of the people who live there. So I wanted to meet those people and understand more than you can get out of any book or out of any article.”

She’ll bring the passion she had for her work as a journalist to the city and she’s excited to be part of a group that is working hard on the climate change front.

“The thing that’s always motivated me is trying to make this world a better place,” Lawrynuik said.

“I’ve found that over time, how I’m able to contribute with the skillset I have has meant doing different things. And so at one time it was going to Iraq and creating a radio documentary to try and bring those stories back to Canadians. Now I’ve become more educated in the climate change realm and my skillset has offered me this new opportunity to work with a team that is creating nation-leading policy on the biggest problem we will ever face as a species. To be able to contribute to that team, doing this kind of work, it is all connected, it all feels like it is part of one story.”

Making energy efficient decisions easy and available to all

Nicol said Lawrynuik will link people with Efficiency Manitoba’s programs by developing a communications and engagement program that will make it easy for citizens to access.

“A big part of her work is going to be taking this technical program and translating it into language that people understand and meeting them where they’re at,” he said.

“Her communication skills are phenomenal and she has a history of taking this complex science and technical information and translating it, putting it in a way that people can understand, making it as easy as reading the daily paper.”

Lawrynuik will also work within the city to access those same Efficiency Manitoba programs and opportunities, as well as new federal and provincial programs that are coming out.

“The third component is really enhancing what we offer at the city. Are there things that we can do to amplify or support efficiency and GHG reduction within the community? Are there policies and new programs that we can launch within the city?” Nicol said.

“She’ll do policy development for the city that’s supportive of our climate change mitigation and energy efficiency work, making the city more efficient, and embedding that within the organization.”

The energy efficiency program administrator is a two-year term position. Selkirk was the first municipality in the province to receive the funding.